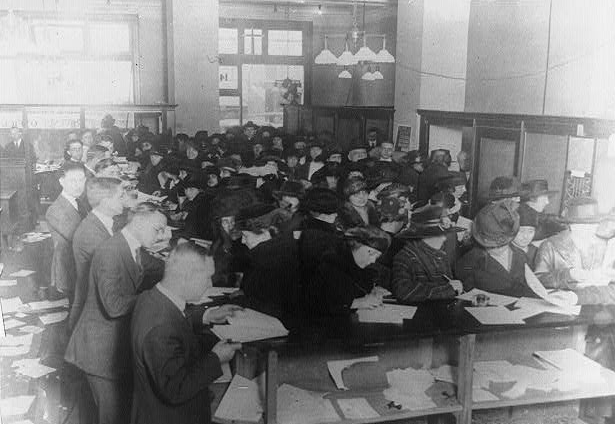 Things certainly have changed over the years when it comes to tax filing, especially from the technology perspective. But upgrading all today's IRS computer systems could mean a delayed 2019 tax filing season. (Photo via Wikimedia Commons)

As 2018 winds down, we're all looking at tax moves we need to make. (Need some ideas? Check out the suggested October tax tasks to tackle.)

In addition to us individual and business filers, "we" also includes the Internal Revenue Service.

And the tax agency could have some added trouble this year, thanks to all the changes made late last year by the Tax Cuts and Jobs Act.

In fact, some folks are warning that the hassles the IRS must handle in connection with the new tax law could mean we taxpayers will face a delayed filing season.

Lots to cover: The TCJA is the first major tax reform bill in more than 30 years.

The IRS has estimated that implementing all of the bill's changes will require creating or revising about 450 forms, publications and instructions.

We've seen some of those suggested form changes already, like the technically shorter but realistically longer from many new Form 1040. And we've seen the IRS punt when it comes to one document, the proposed new W-4, that isn't needed file an annual tax return.

In addition, Uncle Sam's tax collector also must modify around 140 information technology systems to ensure that it can handle all the newly revised tax forms.

That's a lot for the IRS to take care of even before it gets to processing around 140 million tax returns in 2019. And some are worried the agency might not be up to the task.

Bad timing for IRS IT: The Treasury Inspector General for Tax Administration (TIGTA) is among the concerned.

In a report issued late last month, the tax watchdog noted that the timing of the TCJA immediately put the IRS behind when it comes to getting ready for an upcoming tax year.

The IRS' Information Technology (IT) group normally has a Jan. 31 deadline for business units requesting information technology products and services for the next filing season.

With the passage of the new tax law in mid-December 2017 (and formal enactment not until Dec. 22, 2017), the IT organization established several interim deadlines to help implement the changes on a timely basis.

However, says TIGTA, the business units missed the deadlines for submitting work request notifications and business requirements. Subsequently, IT set a new deadline of June 1. That shortened the time frame for making system changes for the 2019 tax filing season by four months.

As of July 5, notes the report, IT had not received all final work request notifications and business requirements. 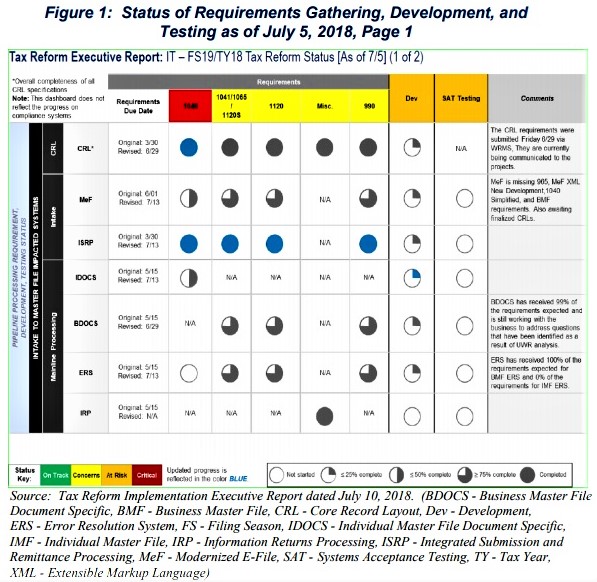 "Delays in receiving this information will result in less time for modifying and testing systems and increases the risk of a delayed start of the 2019 Filing Season," according to the report.

Staffing adds to worries: IRS starring is another area that TIGTA says could affect the 2019 filing season running as regularly scheduled.

The IRS must fill what TIGTA calls critical positions that were vacated by employees or contractors. That' won't be easy.

The IRS, as with all government agencies, must use a lengthy process in hiring employees or bringing contractors onboard. That means the positions might not be quickly filled, causing risk to the timeliness of the information technology updates.

As of June, the IRS had 117 current and new employees on the job to meet its TCJA preparation needs.

In addition, the TIGTA review found that IRS IT is planning to identify any potential negative impact on existing programs and projects caused by implementing the new tax law.

As of mid-July 16, the IRS had not provided documentation of any ongoing projects or programs that will be negatively affected by the implementation of the TCJA changes.

TIGTA says it will keep an eye on the IT group's efforts, but says the IRS' full resource needs and the scope and impact of changes the agency must make will remain unclear until all the requirements are finalized.

That's why TIGTA's report doesn't suggest any ways that the IRS can get up to speed so that the 2019 filing season starts on time.

More money needed: Of course, one thing that the IRS says would help greatly in its efforts to implement TCJA changes in a timely fashion is funding.

And probably in large part because the Republicans in charge want to make sure that the public doesn't get negative feedback from voters taxpayers when they comply with the tax law changes at return filing time next year.

In March, the Consolidated Appropriations Act of 2018, authorized $320 million for the IRS to handle its new tax law needs. Another $291 million was allocated by Congress in May specifically for information technology requirements.