The World, Mostly by Leif Kurth via Flickr CC

Donald J. Trump got a lot of attention when he popped down to Texas last week for a midterm campaign rally. He told the Houston crowd that he was a nationalist.

That term, he explained, describes the philosophy he's espoused since the get go of his presidential political life. He wants to put America first.

There's nothing wrong with wanting your country to get the best deals and treatment in international relationships.

But Trump also narrowly, and to my thinking incorrectly, defined globalists as people who want to put global issues ahead of their own countries' needs and wishes.

"A globalist is a person that wants the globe to do well, frankly, not caring about our country so much. And you know what? We can't have that," according to Trump.

We are the world: Strictly speaking, a globalist approach formulates economic and foreign policy in relation to events and developments throughout the world, not just within one nation's borders.

If you ignore what the other countries are doing, for ill or good, then you can't counter those practices when necessary or compete successfully.

And compete we must. Despite Trump's perspective, it truly is a global economy and the United States is still part of the world.

In fact, Trump and the GOP used a global perspective in making their case for the recent corporate tax changes in the Tax Cuts and Jobs Act (TCJA).

U.S. companies, Republicans argued, are moving much of their operations, including headquarters via the sneaky inversion technique, to other countries around the world because America's business taxes are too high.

Now under the TCJA, corporations face a 21 percent tax rate instead of the previous 35 percent. That 14 percent cut was a key in making the United States more competitive in the global economy, say some corporate tax experts.

"There's a lot less drive for corporations to move overseas and you have greater incentives to bring overseas money back home," Tom Wheelwright, author of Tax-Free Wealth and CEO of ProVision, a CPA firm specializing in entrepreneurial taxes, told Business News Daily after the bill was passed last December.

U.S. tax competitiveness in 2018: So just how competitive is the United States now that the corporate and individual tax rates were lowered under the new tax law?

The Tax Foundation's 2018 edition of its annual International Tax Competitiveness Index found that the TCJA's changes helped the United States improve four spots from the previous year. We moved from 28th to 24th on the global tax list of Organisation for Economic Co-operation and Development (OECD) nations.

The rankings are determined by how well a country designs its tax code.

A well-structured tax code is easy for taxpayers to comply with and can promote economic development while raising sufficient revenue for a government's priorities, say the analysts at the Washington, D.C.-based tax policy nonprofit. In contrast, they say poorly structured tax systems can be costly, distort economic decision-making and harm domestic economies.

While our Internal Revenue Code's better ranking this year is a step in the right direction, the Tax Foundation says there's still work to be done.

The tax policy group says the United States still ranks towards the bottom of the pack because of our:

So who has the best tax system in 2018 according to the Tax Foundation analysis? Estonia.

And the worst? That dishonor this year goes to France. 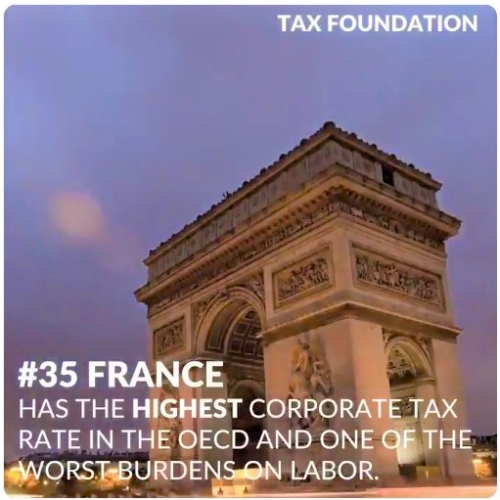 I'll let you peruse the full report to find out where other OECD countries fall on the tax scale, as well as why they ranked as the did in the full report, which gets this week's Saturday Shout Out.

C'mon, what else were you going to do this weekend? Plus, global taxes are perfect scary pre-Halloween reading!