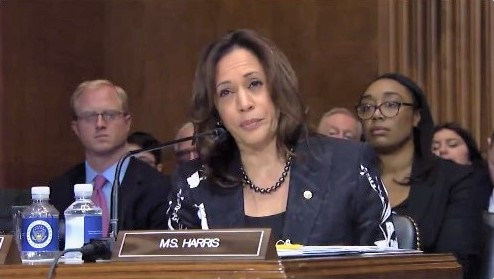 It's official. Unofficially. The 2020 presidential campaign is underway.

Last week, California Democratic Sen. Kamala Harris introduced her LIFT (Livable Incomes for Families Today) the Middle Class Act. The bill's most notable feature is a refundable tax credit of up to $6,000.

Tax-savvy folks know a tax credit is better than a deduction because it provides a dollar-for-dollar way to cut your tax bill.

If, in the case of Harris' proposal, you qualified for the full $6,000 credit and had a tax bill of $7,000, then you'd offset that tax liability with the credit and end up owing the Internal Revenue Service only $1,000.

Even better, Harris wants the credit to be refundable, which is just what its name sounds like.

Suffering from stagnant earnings: The Golden State's junior Senator says her plan would address the inequality exacerbated by the Republican Tax Cuts and Jobs Act (TCJA).

"Americans are working harder than ever but stagnant wages mean they can’t keep up with cost of living increases," said Harris in announcing her bill. "We should put money back into the pockets of American families to address rising costs of childcare, housing, tuition, and other expenses. Our tax code should reflect our values and instead of more tax breaks for the top 1% and corporations, we should be lifting up millions of American families."

After adjusting for inflation, today's average hourly wage has just about the same purchasing power it did in 1978, following a long slide in the 1980s and early 1990s and bumpy, inconsistent growth since then, according to Pew's analysis.

"In fact, in real terms average hourly earnings peaked more than 45 years ago: The $4.03-an-hour rate recorded in January 1973 had the same purchasing power that $23.68 would today," notes Pew senior editor Drew DeSilver in writing about the study.

Monthly or annual tax help: To help middle-income Americans deal with increased living costs and stalled wages, Harris wants to give them up to $6,000 a year per family as a refundable tax credit.

Here's how she says LIFT would work:

The Tax Policy Center chart below shows how the LIFT tax credits would work across income levels: 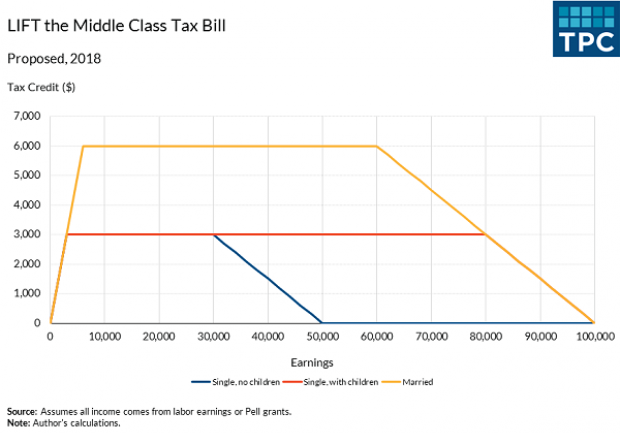 Harris also cites an Institute on Taxation and Economic Policy evaluation that estimates the LIFT Act would impact one in every two workers and two out of every three children in America. In addition, ITEP estimates approximately 1 million Pell Grant eligible students would qualify for the credit of up to $3,000.

Echoes of the EITC: Taxes have always been used as a tool of economic equality, so Harris' bill is not revolutionary.

In fact, LIFT is similar to a proposal that a fellow federal lawmaker from California introduced last year utilizing the Earned Income Tax Credit (EITC), a 1975 tax break prompted in part by LBJ's war on poverty efforts and which has been expanded by various pieces of tax legislation over the last 40-plus years.

Rep. Ro Khanna's (D-California) Grow American Incomes Now Act (GAIN) proposed to almost double the current EITC for families with two kids, bringing it to a maximum of about $10,800. Single workers also would get a big bump, with their potential EITC amount going from $510 to $3,000.

Sen. Sherrod Brown (D-Ohio) introduced a companion GAIN bill in the Senate. As expected with both Congressional chambers under GOP control, the proposal went nowhere.

The EITC, despite the complications that taxpayers face in filing for it and the potential for fraud, still is seen by many as one of the best ways to provide a tax break for lower-income working people.

The EITC used to have an advance payment option, similar to the monthly payments Harris has included in LIFT, but that option was dropped due to administrative problems.

It probably won't advance even after the midterms since it appears the Senate will remain in GOP control after Nov. 6.

But if, as expected, Harris seeks the 2020 Democratic presidential nomination, she'll be discussing LIFT a lot.

It's already a conversation starter, being equally hyped and hammered.

And the talk has made it to the top of the political food chain, apparently being addressed, albeit obliquely, by Donald J. Trump.

Trump, speaking to reporters after a campaign rally in Nevada on Saturday, Oct. 20, said House GOP leaders are working on developing a "major tax cut for middle income people" that will be unveiled "sometime just prior, I would say, to November."

Done in D.C. for now with taxes: The House on Oct. 1 passed three GOP Tax Reform 2.0 bills, designed to expand and make individual tax components of the TCJA permanent. Then all the Representatives left Washington, D.C., to hit the campaign trails.

The Senate, too, has recessed until after the Nov. 6 votes are cast. It did so without taking any action on the latest House-approved tax measures.

So there's no way any new middle-class tax bill will suddenly appear in the coming weeks.

Still, Trump felt compelled to emphasize this weekend that this mythical new tax plan would not be for business, but basic Joe and Jane Workers.

"Not for business at all," Trump told the gaggle of reporters. "For middle-income people. Now, the last was for middle income and for business, and our business is now coming back because of it."

It sounds like he's been hearing about Harris' bill — and thinking about her possible 2020 presidential bid — and wanted to pre-empt it as much as he could.