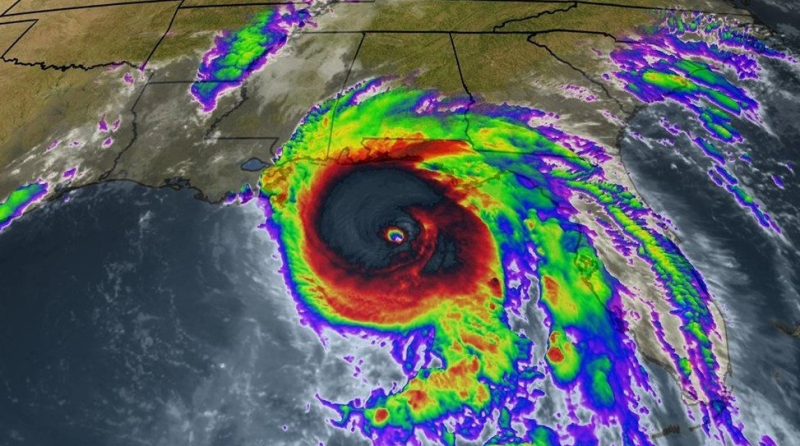 Hurricane Michael is bearing down on the panhandle of Florida.

It's expected to make landfall It made landfall this afternoon, possibly as category 4 strength (or stronger; wind instruments blew away before getting final readings), a speed at which it's been churning up the Gulf of Mexico for almost half a day.

It's too late to evacuate, so I hope folks have found secure places to hunker down.

And while I know no one is thinking about taxes when a hurricane is heading their way. The Internal Revenue Service was far from the hubby's and my minds back in 2004 when we lived in Florida and dealt with two category 2 storms within three weeks' time.

But the tax code and IRS does provide some recovery help after a major storm hits.

The White House followed that example, issuing an federal emergency declaration for Florida yesterday, Oct. 9, in advance of Michael's landfall in the Sunshine State.

The presidential order allows for federal assistance by the Federal Emergency Management Agency (FEMA) to supplement state and local Hurricane Michael response efforts, retroactive to Oct. 7 when disaster preparation began in earnest, as well as for actions that will be necessary during the hurricane's continuing threat.

Note those counties. They will be the ones that the IRS will include in its expected follow-up announcement of areas eligible for special tax considerations.

Also note that others might (probably will) be added after the storm passes and FEMA folks on the ground send in their assessments of damage.

IRS tax breaks for disaster victims: The IRS usually offers those who are major disaster areas extensions of time to meet any tax deadlines that arrive during the storm's duration and aftermath. The most recent such tax relief was granted for Hurricane Florence victims.

UPDATE, Oct. 12, 2018: The IRS is on the ball, prompted in part by Hurricane Michael's landfall timing. The deadly tropical system hit as a Category 4 just days before the Oct. 15 filing extension due date. That's why the tax agency on Friday, Oct. 12, announced tax relief and a new deadline of Feb. 28, 2018, for that and other tax tasks. Only a handful of the counties mentioned earlier qualify, for now. Stay tuned and get details in this post.

Uncle Sam's tax collector knows that when Mother Nature's wrath is imminent, residents and businesses in her target zone are otherwise focusing on more important things, like protecting themselves, their families and their businesses.

Click image for GIF movement in a new browser window.

In addition to the extended deadlines, the IRS also typically provides for abatement of any penalties that might have automatically been imposed.

And in the case of presidentially declared major natural disasters, individuals and business who sustained damage might be able to count some of their losses as an itemized casualty deduction on their taxes.

In these specific major disaster cases, which is what such claims are limited to under the Tax Cuts and Jobs Act, they get the option to file an amended return for the prior tax year or deduct the eligible damage amounts on the tax return for the year in which the disaster occurred.

And while the IRS' efforts to lessen some of the more mundane worries during a disaster are appreciated, it can be frustrating for those waiting for the official tax relief announcements.

Rice's measure would automatically delay for 60 days tax obligations for those in areas for which a federally declared disaster status has been requested.

Note the word "requested." Rice doesn't even want folks to have to worry about whether Uncle Sam will agree and grant the federal disaster designation.

The Disaster Certainty Act was introduced on Sept. 17. It's awaiting action by the tax-writing Ways and Means Committee, of which Rice is a member.

Carolinas could be hit again: The timing also is no surprise. Rice introduced the bill while much of his home state is still recovering from the havoc wreaked by Hurricane Florence last month. The Palmetto State also is along the path Hurricane Michael is expected to take after making landfall.

Here's hoping that everyone in Florida, Alabama, Georgia, North and South Carolina and Virginia are well prepared for whatever Michael might bring their ways.

And when the storm does clear, be sure to take all the help, tax and otherwise, that's offered, from state agencies, FEMA, the IRS and charitable groups.