Texas, according to veteran Lone Star State meteorologists, is the land of perennial drought, broken by the occasional devastating flood. Such flooding occurred today, opening up the possibility that parts of the Texas Hill Country could be deemed major disaster areas. If that happens, affected property owners can claim their losses on their tax returns. 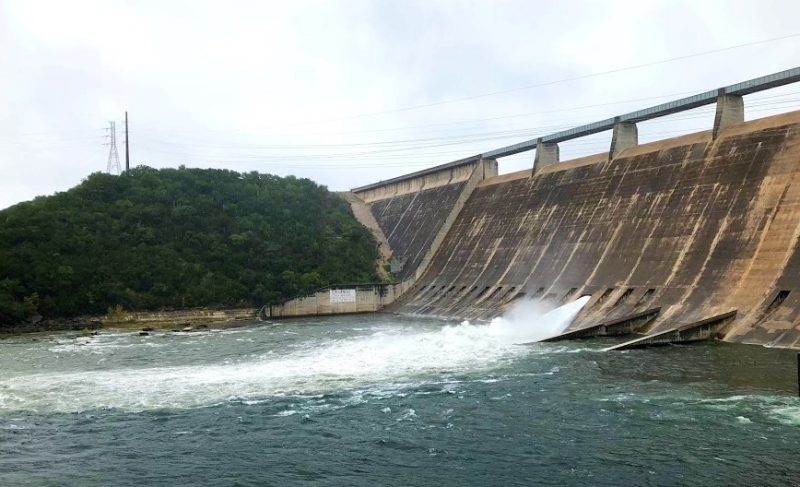 Mansfield dam image Excessive rainfall has produced devastating flooding in Central Texas, forcing area officials to open floodgates at local dams. The amount of water flowing into area rivers and lakes is so heavy that even Mansfield Dam in Austin, the structure that holds back Lake Travis, had to open one of its floodgates this afternoon. Click image to see video of open floodgate. (Photo and accompanying YouTube video by Kay Bell)

Folks in the Florida Panhandle and four other southeastern states are still digging out from Hurricane Michael. Some of those places whacked by Michael already had been hit by Hurricane Florence a few weeks earlier.

What's happening in my neck of the woods today pales in comparison to the damages from Florence and Michael. But that in no way diminishes the damages, some extensive and life-changing, that some of my Texas neighbors sustained today.

Here in Austin, we're at the end of this excessive water event. Some houses along the shores of Lake Travis, especially where it still resembles the Colorado River from which it was created, have flooded.

The main Lake Travis reservoir is the fullest it's been in years, steadily — and scarily — climbing up the wall of Mansfield Dam, which stops the water from entering Lake Austin on the other side. The Lower Colorado River Authority eventually opened four more Mansfield floodgates today to release that pressure.

That means more folks downstream could see some flooding.

Overwhelmed, overflowing: Locations upstream from Lake Travis, however, took the brunt of the rain accumulation.

Marina piers, residential decks and docks, whole trees, personal watercraft and decent size boats were carried away by rising and fast-flowing rivers and going over — yes, over — the tops of dams.

That was the case about 50 miles northeast of Austin in Marble Falls, the Max Starke Dam separates Lake Marble Falls from Lake Travis.

Starke's 10 floodgates were open this morning, but the water's flow was so strong that the openings weren't enough.

Water from the bursting Lake Marble Falls topped the dam itself, as the KXAN video above shows. In other areas, material that had been swept away flowed freely under bridges, as seen in other videos captured by news crews from the Austin NBC affiliate.

I'm not sure if today's Texas floods that are straining area dams will result in a major disaster declaration, as is the case for what happened with Hurricanes Florence and Michael.

That means those folks can claim associated hurricane losses on their taxes.

Here's how that process works.

Major disasters only: First, we've got to look at how new tax laws under the Tax Cuts and Jobs Act (TCJA) affect property loss tax claims.

The option to claim casualty losses due to a disaster has long been a part of the tax code. That's still the case. In fact, it's now the only instance allowed.

Previously, any uninsured losses that met the tax law guidelines could be claimed, such as damages from a house fire or property stolen by a burglar.

Now the TCJA says that only losses attributable to major disasters can be claimed.

Taxpayers still have the ability to claim major, presidentially-declared disaster losses on either their prior year tax return or on the return they'll file for the year in which the disaster occurred.

This choice lets folks compare which filing will produce a better tax result.

The prior year filing typically is done by completing an amended Form 1040X return. If you wait, you'll claim the losses on your Form 1040 you file the next year.

In some cases, claiming disaster losses as an itemized deduction on the previous year's tax return gets filers bigger refunds. Just as, or sometimes more important, claiming the losses for the prior year will get the money to affected taxpayers sooner, meaning they can use it to speed up recovery efforts.

However, the option to time-shift federal disaster casualty losses to the previous year is not the best move for all taxpayers.

Problems with prior (or any) year disaster claims: Some storm victims might find that while their losses are substantial, they aren't enough to meet two tax-law limits on casualty claims.

First, you must reduce the amount you can claim by $100. Then, you have to reduce the total of all your casualty losses by 10 percent of your adjusted gross income (AGI). You also have to subtract any insurance money you got for the loss.

This means that you'll want to look at your earnings for the tax year in which you'll claim the loss. If you had or will have less income in the prior year vs. the current one (or vice versa), then that's the one you want to use so that you'll face a lower 10 percent AGI reduction of your loss claim.

Also, the TCJA generally throws a wrench into itemizing. The new tax law dramatically increased the amount of the standard deduction for all filers. Unless you have substantial uninsured major disaster losses, it might not be worth filling out a Schedule A to make the storm-related claims for any year.

Evaluate your individual circumstances — tax, damage and financial recovery needs — carefully before deciding whether and when to make the storm claim.

Filing steps: OK. You've decided that claiming your disaster losses is worthwhile. You've picked the tax year in which you want to make the claim.

Here's the paperwork you'll have to submit.

To claim disaster losses, you must file the (for now; TCJA form changes are coming) long Form 1040 individual tax return plus Form 4684 to figure and report your casualty loss and Schedule A to itemize your loss deduction.

If you need to file an amended return to claim losses, you'll file Form 1040X instead.

Calculating claim values: Then you must determine how the damage has hurt your property's fair market value. This is a two-part valuation: what your property was worth immediately before the catastrophe and what it's worth after.

The pre-disaster value is your adjusted basis.

For real estate, this usually is the cost of the property plus certain adjustments, such as improvements that add to the structure's value. You can find more on this process in Home basis, not market value, key amount in calculating disaster loss tax claim.

If you're claiming a vehicular loss or other personal property, the adjusted basis may be determined by the depreciation that reduces the auto's or property's value.

An appraisal of your property's post-disaster value can help here. Compare that amount to your adjusted basis and the difference between the two amounts is your loss from the casualty.

Once you've determined your loss, use Form 4684 to figure the deductible amount of your casualty loss.

You must reduce the initial loss claim amount by any insurance or other reimbursement you have received. This also is where the aforementioned $100 reduction and 10 percent of AGI come into play in determining your final casualty loss deduction.

Deduction doesn't equal tax refund: Now it's time to figure out the actual tax value of your loss deduction.

Remember, the $20,000 in total real estate, personal property and car claims you detailed on Schedule A and transferred to your Form 1040 or 1040X don't directly translate to the amount of whatever tax refund you'll receive based on the loss.

Just as you do every time you file a return, you must figure your taxes. This time you do so using the disaster loss deduction to determine just how much tax-wise the loss will help you'll get back as a refund.

Yes, it's not an easy process. Yes, that's frustrating when you've already been hassling with the real-life tasks of recovering from a disaster.

But a tax professional or tax software can help you make it through the process. And it could be one with a positive tax refund payout that makes it worth the trouble.

Good luck, with both making your disaster claim and getting your life back to normal as quickly as possible.

Previously waterlogged: While today's Central Texas flooding is near historic levels, the hubby and I have seen other instances since we've lived in Austin where Mansfield Dam had to let out water from an over-filled Lake Travis.