Halloween trick, not treat, on the 10% tax-cut promise 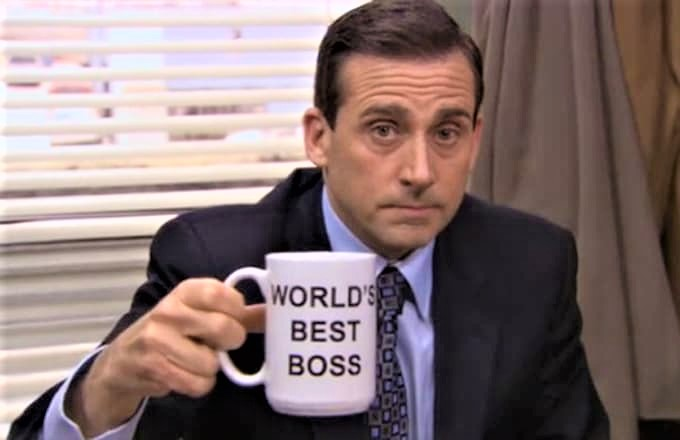 Despite the mug's proclamation, Michael Scott (as portrayed by Steve Carell in the U.S. version of The Office) tended to be a bad boss.

Donald J. Trump is that boss that almost all of us have at one time had.

You know the one. He or she is always telling clients, "Sure, we can do that. No problem, no problem at all."

Maybe no problem for the boss, but plenty of problems for the workers who have to follow through and make good on the pie-in-the-sky pledge.

That's probably how Congress is feeling right now in the wake of Trump's announcement that middle-class taxpayers soon would get an additional 10 percent tax cut.

U.S. Representatives, all of whom are up for reelection this year, are feeling the most pressure since the Constitution demands that all tax law originate in the House.

We got an indication of that pressure today, Oct. 31, with a Halloween trick and treat from the White House and the tax-writing House Ways and Means Committee.

Off-the-cuff tax cut promise: When Trump tossed out that additional tax cut idea after an Oct. 20 political rally in Nevada, he indicated it would happen before the Nov. 6 midterms.

Maybe he was/is still unclear on the legislative process. The House and Senate are in recess until mid-November, so those lawmakers aren't in Washington, D.C., to create and pass in such a short turnaround time any tax bill.

Maybe Trump tossed out the added tax cut idea to counter a family-friendly tax cut proposal by an up-and-coming Democrat, Sen. Kamala Harris of California. She's seen by many as one of her Party's best candidates to challenge Trump in 2020.

Or maybe Trump just said it to say it. He's prone to uttering what he thinks sounds good at the time.

Whatever the reason, the new tax cut idea was thrown out there and continued to attract attention, for political good or ill.

Opponents of the GOP's Tax Cuts and Jobs Act (TCJA) seized on Trump's comments, arguing that it was an implicit admission that the tax reform measure enacted in December did much more for big business and the wealthy than for average Americans.

Republicans countered by pointing to what they say are the bill's benefits that have already made a positive difference to the economy.

W&M agrees to work on it: Today, though, lawmakers felt compelled — or were pressured by the White House, aka their over-promising political boss — to go further.

They joined Trump in making the tax cut promise, although with a longer time line.

Trump and Ways and Means Chairman Rep. Kevin Brady (R-Texas), in a joint statement issued Oct. 31, cited the House's recent passage of three Tax Reform 2.0 bills. These measures would make permanent the individual and small business tax cuts that for now are only in place through tax year 2025.

And, yes, they did specifically repeat the 10 percent pledge.

"We are not done yet. We know that when hardworking Americans — not Washington — are in charge of spending their own money, our economy grows and families are better off," reads the statement. "We are committed to delivering an additional 10 percent tax cut to middle-class workers across the country.  And we intend to take swift action on this legislation at the start of the 116th Congress."

No tax work until next year: Ahhhh. Not before we vote on Nov. 6.

Not in a lame-duck session of the 115th Congress after next week's elections either.

Instead, say Trump and Brady, swift tax action will come at the start of the 116th Congress.

By pushing the added 10 percent tax cut a few more months into the future, it's possible that Trump, Brady and their GOP colleagues might not be in a position to fulfill this latest vow.

Election changes mean legislative changes: If Democrats take control of the House, as many political pundits predict, that party will control the tax and other legislative agendas for the next two years.

Democratic leaders might indeed formulate a middle-class tax plan, but it likely would include added dramatic changes to the other parts of the TCJA.

Senate Republicans, who are expected to hold control of that chamber, wouldn't go along with any Democratic House tax changes.

That leaves us with a tax stalemate.

So really, what we're probably looking at is another sounds-good promise and no actual legislation for at least a few years.

Things, of course, could change. The GOP could keep the House or the Democrats could eke out Senate control. Things will be clearer by the end of next week.

But don't expect, based on the latest promise from Trump and Brady, any more tax cuts for a while.