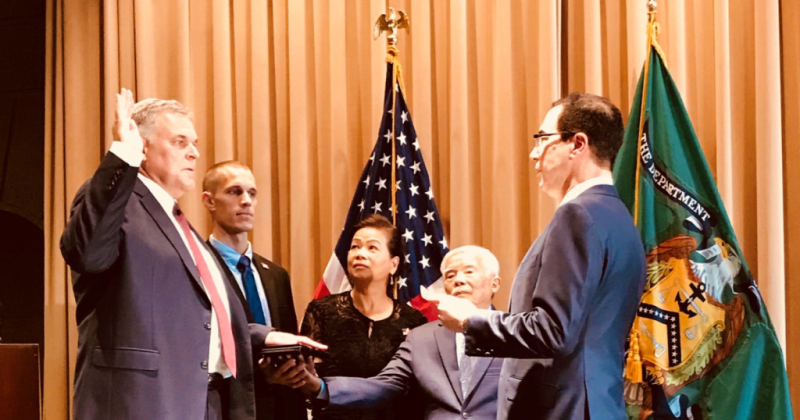 It's official. Charles P. "Chuck" Rettig is the Internal Revenue Service's 49th commissioner. He moved into his new office on Monday, Oct. 1, almost 11 months after his predecessor, John Koskinen, left the job.

After 36+ years with the California-based law firm of Hochman, Salkin, Rettig, Toscher & Perez, P.C., Rettig now will be in charge of around about 80,000 employees and a budget of approximately $11 billion.

Rettig's official IRS web page says he will focus on "improving service to the nation's taxpayers [and] balancing appropriate enforcement of the nation's tax laws while respecting taxpayer rights."

He reportedly emphasized that message to IRS workers in an agency-wide email he sent on his first day. In that internal message, he also told his staff, "I am honored, privileged and most humbled by the opportunity to serve with you as Commissioner. The foundation of my becoming Commissioner is a deep appreciation for the IRS, its workforce and our country."

Rettig also didn't pull any punches in his first communication with the tax agency's workforce.

"I know the Service has many challenges; I've seen them firsthand through the years and I know those are sources of frustration for taxpayers and for you as IRS employees," he wrote, according to The Hill. "I also know we must continue rebuilding trust with taxpayers while implementing the once-in-a-generation tax reform bill passed by Congress in December. We must work on our IT modernization efforts."

Political nonprofit rules worry Democrats: Few in the Senate questioned Rettig's tax credentials or his ability to lead the federal agency that collects around $3.4 trillion a year for the U.S. Treasury.

But most Senate Democrats voted against Rettig's confirmation because they dislike recent IRS guidance items and were not happy with the new commissioner's answers during his confirmation hearing as to how he would deal with the issues.

Top on the Dems' problematic tax reg list is the Trump administration's policy revision that now lets nonprofits that are involved in politics be more secretive about their donors.

Specifically, tax-exempt organizations under Internal Revenue Code section 501(c), except for 501(c)(3) organizations, are no longer required to report the names and addresses of their contributors on the Schedule B of their Forms 990 or 990-EZ. The donor disclosure requirements for 501(c)(3) and 527 organizations are not affected by the change.

During consideration of Rettig, Sen. Ron Wyden (D-Oregon), the ranking Democrat on the Senate tax-writing panel, pressured the then-nominee about the nonprofit policy change.

Wyden has characterized the limited disclosure as an attempt to weaponize the tax code to punish political adversaries and benefit shadowy far-right groups that seek to buy elections. "Dark money groups used to be required to disclose their donors to the IRS. With this new rule, they won’t be required to disclose at all," said Wyden.

Johnson Amendment push and pull: Wyden and his colleagues also are concerned about the Administration's interest in repealing the Johnson Amendment. This part of the tax code, enacted in 1954 and named for its sponsor then-Texas-Sen. Lyndon B. Johnson, prohibits tax-exempt organizations, including houses of worship, from endorsing political candidates.

Conservatives, particularly those associated with evangelical groups, have long sought to have the Johnson Amendment repealed. They are making progress under Donald J. Trump, who in May 2017 issued an executive order "to defend the freedom of religion and speech" and called for limited executive branch enforcement — in the order's words, to not take any "adverse action" — against churches and other groups that have "spoken about moral or political issues" from a religious perspective.

Polls, another critical factor in almost every Capitol Hill decision, also show that most Americans support the Johnson Amendment.

Smoother sailing for new tax captain? While Rettig isn't likely to evoke the same ire among Democrats that Koskinen did with Republicans — remember the constant impeachment threat? — the midterm elections could make the new commissioner's job a bit more difficult.

Some members of the for-now Congressional minority party are making it clear that they will continue to demand answers from the new tax commish on nonprofit and other tax matters. And if Democrats win a majority in either legislative chamber in the coming midterms, they'll go beyond just sending letters to the IRS headquarters across town.

As was the case with Koskinen under GOP House rule, if Democrats take over as committee and subcommittee chairs, they'll have Rettig trek back to Capitol Hill for more one-on-one questioning about their tax policy concerns.