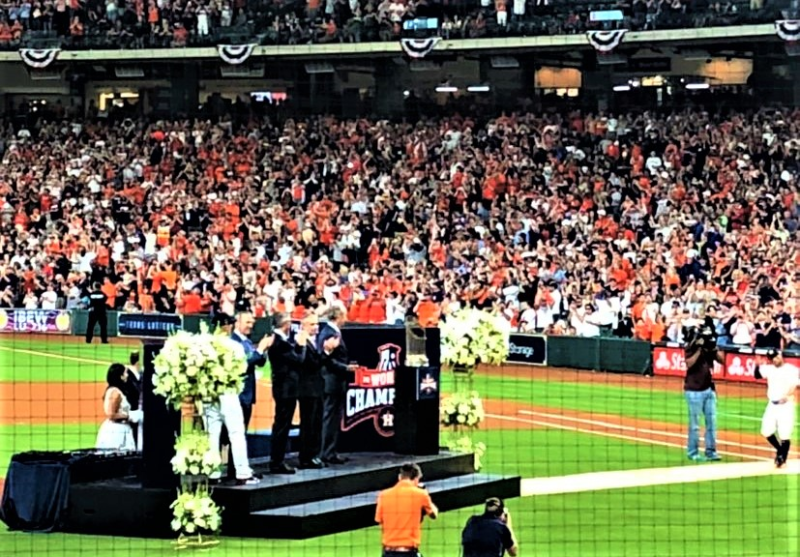 José Altuve, Major League Baseball's 2017 MVP, heads to the podium in Houston's Minute Maid Park to get his 2017 World Series ring at the Astros' home opener on April 2, 2018. Yes, my photo is blurry, but the stadium was rocking!

Football season is here. Professional, college and high school teams have all taken the field for games that finally count.

But some of us are still watching baseball.

Major League Baseball (MLB) playoffs are nearing and there are tight division and wildcard (don't email me baseball purists; it is what it is) races, some of which will come down to the wire.

One of the teams that many thought would compete for our national pastime's championship was the Washington Nationals.

Shedding players: Club management accepted that sooner than the Nationals' cheering though not so much now throng.

The Nationals dumped or traded several veteran players, most before the typically frantic MLB deadlines. The moves — one long-time reliever went at the non-waiver trade deadline, two position players in mid-August and two more at the waiver deadline later that month — ostensibly were part of Washington's grander plan.

Nationals' on-field and front-office folks had seen the results of a longer-term approach, known as The Process, where a team opts to go with young (low-salary) players who (they hope) will form a winning core, albeit after forcing fans to suffer through some dismal years before the payoff.

The Philadelphia Phillies are on that path now, following the route set by defending and (I hope!) potential repeat champion Houston Astros.

Still facing MLB tax: But, says Washington Post sports reporter Chelsea Janes, there's another reason for the early personnel moves. And, you guessed it, it's tax-related.

"One theory, never stated by any Nationals personnel but supported by the strange timing, is that the front office was operating to try to shed enough payroll to slide under the competitive balance tax threshold for this season. Because the Nationals crossed that threshold for the first time last season, they would owe 30 percent on this year’s overages as second-time offenders," writes Janes in today's Saturday Shout Out piece.

OK, technically, the MLB luxury tax, which is the nickname given the levy for paying players a hella lot of money, is not a tax. But who's quibbling over sports semantics on a weekend? Not me, as I wait for my 'Stros to take on the Boston Red Sox in a possible post-season preview.

The Nats tell Janes that wasn't the reason. And on one hand you have to believe the team, since despite the moves it will this year still eclipse the threshold of $197 million.

Flexibility for the future: The team did, at least, save around $12 million with the moves, according to Janes, giving it some financial flexibility.

"That money can go to paying the overage tax or to paying a player, or two, this winter," writes Janes, filling some holes.

"But they did not offload enough to get under the competitive balance tax threshold, which would have increased that flexibility far more," she notes.

Personally, as much as I would love to own a professional franchise — baseball, football, hockey (go Caps!) top my lottery win wish list — I'm glad I don't have to worry about dollars when it comes to sports.

I just want to enjoy the games. And I want the teams I support to enhance my enjoyment by paying whatever it takes — and paying any tax necessary — to assemble the best, competition crushing rosters.