Tiffany Haddish just wants a 'thank you' from IRS

Hey, Uncle Sam, one of the funniest actresses out there is not feeling very cheerful right now and it's your fault.

Tiffany Haddish is looking for a little gratitude from your tax collector. 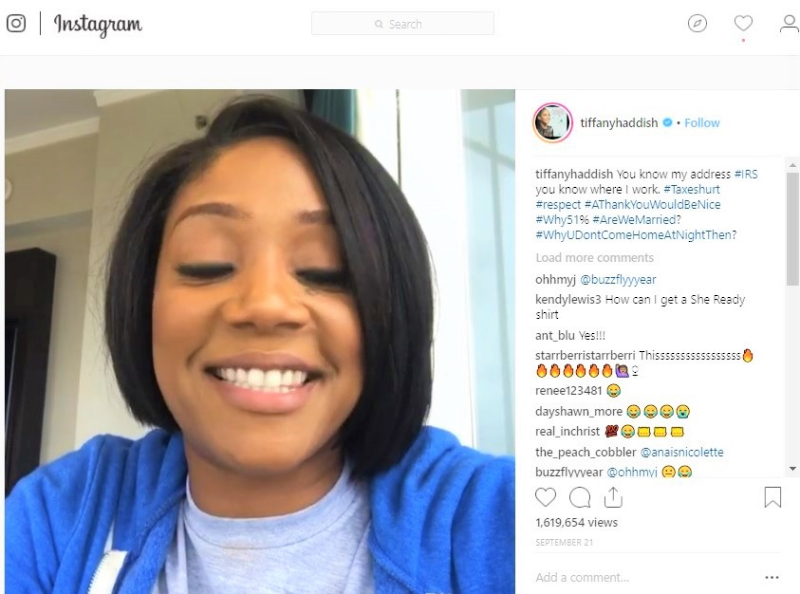 In a recent Instagram video, the award-winning star of the just-released "Night School" asked the Internal Revenue Service why, even though she pays her taxes "on time every year all the time," she never gets any thanks for her efforts.

She doesn't let her state tax officials, the California State Franchise Tax Board, off the hook either for their similar lack of tax love.

Shout outs all around: After offering a shout out to both the federal and state tax agencies — a communication that earns Haddish's post this week's Saturday Shout Out honors — she quickly shifts into disappointed and aggrieved mode.

"You never, ever, ever, send me a thank-you card, or a birthday card, or a Christmas card, or a Hanukkah card, or any kind of anything that says, ‘You know what, Tiffany, we appreciate that you're out here busting your ass, making all this money and we're taking about 51 percent of your money," chides the loquacious Haddish, who points out that the tax officials know where she lives.

"Can you just say 'Thank you,' IRS? Can I get a thank you? Because it hurts. It really hurts. So disrespectful," adds an obviously pained Haddish.

Haddish hashtags: Haddish, who earned an Emmy this year for her guest hosting of NBC's Saturday Night Live, also added some pointed hashtags to her Instagram tax thanks plea:

The 51 percent hashtag obviously refers to the percentage of her income she says in the video that she pays each year in taxes.

I'm presuming that is her combined state and federal level tax rate. And it might be exaggerated. Folks tend to get a bit hyperbolic when it comes to their taxes.

But even with the new Tax Cuts and Jobs Act federal rate cuts, the wealthiest taxpayers could end up facing a 37 percent income tax rate, down from the prior-year's 39.6 percent rate, on their last dollars.

Then you add to that the Golden State's top tax rate of 13.3 percent, which includes a 1 percent surcharge, the mental health services tax, on Californians who make more than $1 million a year. Haddish's net worth is estimated to be around $2 million.

So for 2017 taxes at the higher federal rate, 51 percent might not be too off if Haddish didn't have a lot of ways to legally lower her tax liability. Maybe, in addition to seeking some thanks from the IRS, she also needs to look into getting a new tax adviser and/or accountant.

E-thanks, perhaps? I'm not sure what those last two hashtags have to do with taxes, but I totally understand Haddish's wish to at least be acknowledged for doing her tax duty.

Everyone needs now and then to feel like what they're doing is appreciated, even — or maybe especially — when that's paying taxes.

So think about it, IRS. Maybe you can come up with a way to send Haddish (and all of us) a thank-you note when you accept our returns and money. I know the agency is all about going modern, so electronic would be OK.