Legalized sports betting could be worth billions to NFL and the IRS would be a winner, too 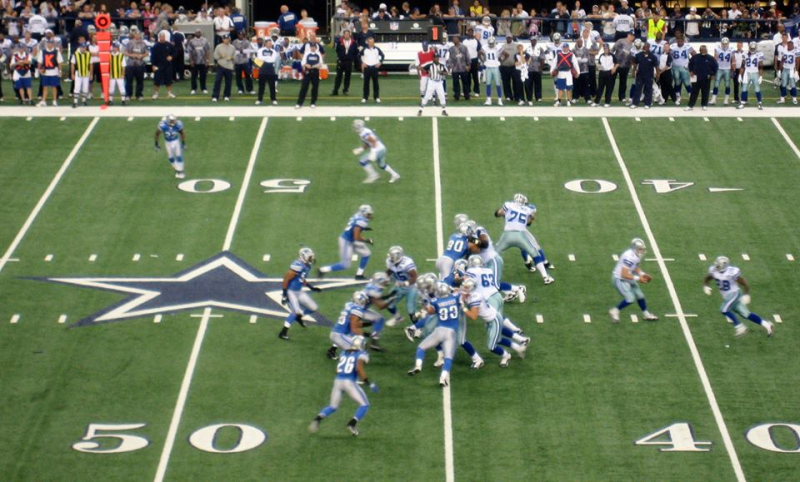 There won't be many bets on the Dallas Cowboys to win the Super Bowl next February. Odds makers say that possibility is a 30-to-1 longshot. I'm a fan of the 'Boys and I think that's being way too optimistic! (Cowboys playing Detroit Lions in Dallas by Kay Bell)

Professional football fans are ready for some football as the NFL's 2018 season kicks off tonight.

And the league itself may finally be ready for some legal gambling on its sport.

The reason is, of course, money.

Billions in betting-related revenue: National Football League could pocket an added $2.3 billion a year thanks to "widely available, legal, regulated sports betting," according to a new Nielsen Sports study commissioned by the American Gaming Association (AGA).

Yes, I know the AGA is a far-from-disinterested party here. It's the national trade group for the multibillion dollar U.S. casino industry, which is where most legal sports wagers currently are placed.

But many sports and economic analysts agree that in the wake of the United States Supreme Court's May 14 decision essentially legalizing nationwide sports betting (at states' discretion), all sports leagues, pro and ostensibly amateur alike, could be rolling in new dough.

"Once legal sports betting expands across the country, the NFL could take in more than $2 billion a year, reinforcing how much sports leagues stand to gain from increased viewership and private partnerships with sports betting operators," said Sara Slane, senior vice president of public affairs for the AGA, in a statement announcing the study.

New $$$ sources: The AGA-requested study analyzes the revenue streams that legal sports betting could generate for the NFL.

They include cash from spending by betting operators on advertising, data and sponsorship, as well as new revenue generated by increased attention — and purchasing of NFL-affiliated products — by consumers who are targets of the new media efforts.

In addition, legal sports betting could help the NFL generate an additional $573 million in revenue thanks to spending by betting operators and data providers.

The study projects that gaming operators may spend $451 million on advertising, which will directly increase the league's rights fees by the same amount.

An additional $92 million in sponsorship revenue and $30 million in data also is projected for the NFL and its member teams.

ESPN has reported that an NFL memo sent to teams and obtained in July by the cable sports network indicates that the league wanted to force any casino brand that advertises with an NFL team to buy official league data.

Fees not factored in: One thing the Nielsen Sports report does not consider are integrity fees that many of the leagues want when betting becomes more mainstream.

These fees would be a portion of what is bet through legal sportsbook operators on games.

Those currently taking bets, as well as the AGA, oppose the fees. Again, money. It would reduce the amount of the handle they would get.

While the amounts that the NFL and other leagues could make in connection with legal betting will continue to be debated, there's no doubt the teams and their governing bodies will make out fine.

Or, as AGA's Slane puts it, "Legal, regulated sports betting will create huge new revenue opportunities for sports leagues and the NFL could be the biggest winner of all."

Tax boon, too: Another winner would be the Internal Revenue Service.

Yeah, you've heard it before. From me yet again less than two weeks ago when I blogged about (slightly) growing Congressional support for regulating legal betting now that the country's highest court struck down the Professional and Amateur Sports Act (PASPA).

Gambling winnings, whatever the source, are taxable income.

If you want to be a law-abiding taxpayer,  you can find details in my earlier post on reporting all your gambling winnings when you file your annual tax return.

But the IRS never gets close to what it's owed on winnings, even on big sports gambling days, primarily because so many of those bets are made illegally.

As such, Uncle Sam's tax collector doesn't get any formal notification of the winnings. Without that third-party notification, it's very difficult for the agency to track down the lucky bettors.

As legal gambling expands, the IRS will start getting some of what it is due from wagers that pay off and out.

In the end, that will be a winning proposition for all of us, regardless of whether we personally place any bets, since the legally bet, paid and reported taxable money will help close the tax gap that all of us end up covering.