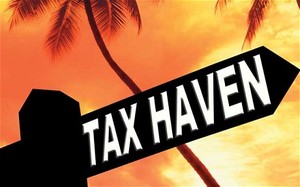 Got enough money that you've diversified by investing in some international accounts? Good for you.

If, however, those non-U.S. holdings are, shall we say, designed to be ultra-private, you might want to think about opening them up. Specifically, tell the Internal Revenue Service about that money you've been hiding from Uncle Sam or pay a big price when your tax haven money is discovered.

One way to do that is by taking advantage of the IRS' Offshore Voluntary Disclosure Program (OVDP).

That opportunity, however, is about to end.

Closing OVDP: Back in March, the IRS announced that it was giving owners of offshore accounts until Sept. 28 to reveal those holdings. After that date — next Friday — the tax agency is shutting down the OVDP.

The OVDP is essentially a federal tax amnesty program. Over the years, the program has given owners of foreign accounts that haven't been reported as required by law a chance to do so.

Why 'fess up? Because if you tell the taxman about the money under the OVDP, you pay the taxes (and interest) due on the previously hidden funds, but at a reduced penalty rate. More importantly, you avoid criminal tax charges.

The IRS first tried the voluntary disclosure program in 2009. It's been extended and tweaked over the years. This latest iteration, which is ending on Sept. 28, was put in place in 2014.

Since the OVDP's initial launch almost a decade ago, the IRS says more than 56,000 taxpayers have used one of the programs to comply voluntarily. All told, these foreign account owners have paid a total of $11.1 billion in back taxes, interest and penalties.

But after peaking in 2011, when around 18,000 taxpayers came forward about their overseas account ownership, the number of self-reporters has steadily declined. In 2017, there were only 600 disclosures via the OVDP.

And following its program closure announcement back in March, the IRS didn't get any public comments arguing for its continuation.

So, says the IRS, the OVDP is on its way out. Soon. By the end of next week. Friday, Sept. 28, which is this week's By the Numbers figure.

Other hidden account reporting options: Even though the OVDP is ending next week, the IRS says it will still offer a way for taxpayers "who may have committed criminal acts" to voluntarily disclose those dirty tax deeds and get straight with Uncle Sam. Those updated compliance procedures, promises the IRS, will be announced soon.

Another separate program, the Streamlined Filing Compliance Procedures, also remains operational for taxpayers who may have been unaware of their filing obligations. This program has helped about 65,000 additional taxpayers come into compliance.

These streamlined procedures will continue to be available for now, but as with OVDP, the IRS says it also may end this program at some point.

So taxpayers who made non-willful mistakes or omissions on their tax returns should file amended returns or delinquent returns as soon as possible.

Catching those who hide: Don't, however, think that the end of the OVDP means the IRS is giving up on finding unreported offshore accounts.

Folks who ignore this last-chance OVDP and decide to stay (they hope) under the tax radar will still be held accountable for those accounts on Sept. 29 and beyond, says the IRS.

How will the IRS find these international tax scofflaws?

It will continue to use whistleblower leads to find hidden offshore accounts established solely to avoid tax payments.

The IRS expects those leads, along with the agency's own IRS civil examination and criminal prosecution efforts, to yield valuable fiscal results. In fact, says the agency, 1,545 taxpayers since 2009 have been indicted related to international activities through the work of Criminal Investigation division.

If the possibility of being caught the old-fashioned investigative way makes the OVDP more appealing, then you've got less than a week to take advantage of it to get right with the IRS. Get busy and good luck!

The IRS has a special online page with more on options available for U.S. taxpayers with undisclosed foreign financial assets.