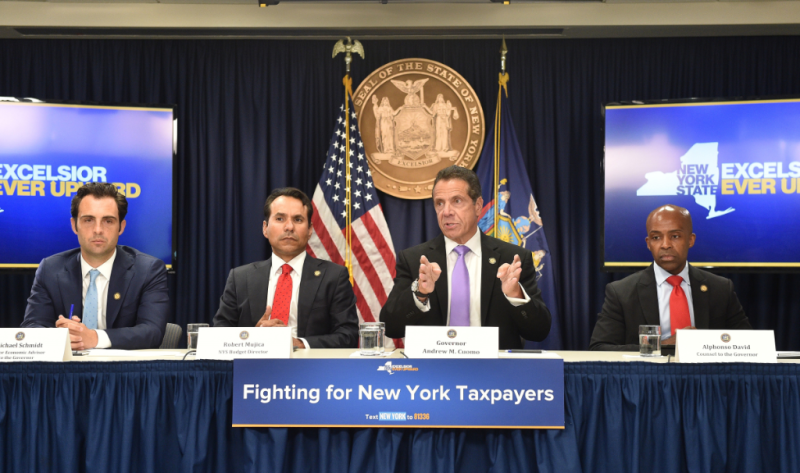 N.Y. Gov. Andrew Cuomo, second from right, and staff announce efforts to investigate what state officials says is the politicization of the new federal tax law limiting the deduction of state and local taxes. (Photo by Kevin Coughlin/Office of Governor Andrew M. Cuomo via Flickr)

A lawsuit fighting the new federal cap on deductible state and local taxes (SALT) is working its way through the courts, but some lawmakers aren't waiting for a judicial (or judicious) result.

With Tax Reform 2.0 moving forward in the U.S. House, a couple of new insurrections have flared up.

On Capitol Hill, a small group of Republican lawmakers have told their party's leaders they won't support any bill that would make the $10,000 itemized SALT deduction limit permanent.

'No go' say some GOP Reps: Four U.S. Representatives from two states where residents are hard hit by the SALT cap say they oppose any extension of the new deduction limit.

New York Reps. Daniel M. Donovan Jr. and Peter T. King and their New Jersey colleagues Frank A. LoBiondo and Christopher H. Smith sent House Speaker Paul D. Ryan (R-Wisconsin) and House Ways and Means Committee Chair Kevin Brady (R-Texas) a letter urging them to "stop any effort to permanently cap the deduction for state and local taxes at $10,000 or we would be forced to oppose the bill."

The four Republicans say in their letter that such an extension would raise housing prices and drive up the cost of local public services in New York and New Jersey.

The GOP Reps' letter was delivered Sept. 7, the week before three bills containing new, expanded and permanent provisions related to last year's TCJA were considered, and approved, by the House Ways and Means Committee.

One of those bills, the Protecting Family and Small Business Tax Cuts Act of 2018 (H.R. 6760), was introduced Sept. 10 and passed by the tax-writing committee three days later. That bill's provisions include the permanent extension of the individual SALT deduction cap at the 10 grand level.

Obviously, GOP leadership is not worried. The four voted against the TCJA last December and the bill still passed 227-203.

But political points in advance of the midterm election have been made. By both sides.

N.Y. seeks federal tax watchdog help: New York Gov. Andrew Cuomo also is posturing when it comes to the SALT deduction limit. But he's moved beyond talk about the costs of the tax change to his state.

Cuomo also sent a separate letter that day to the IRS urging the agency not to implement its proposed regulation blocking state charitable contributions program and a subsequent clarification that allows such programs for businesses but not individual taxpayers.

In his request to TIGTA, Cuomo said:

"Statements by President Trump and his allies during the legislative process made clear that this provision of the 2017 Tax Law was a partisan attack on New York and other states that did not vote for the President.

It now appears that the President, the Treasury Secretary and some members of Congress are actively politizing (sic) the IRS’s work to implement this deduction cap. New regulations recently proposed by the IRS would change the long-standing treatment of tax credits that incentivize charitable giving. Statements by the Treasury Secretary and others made clear that the proposed rule was intended to thwart the well-grounded efforts by New York and other states to protect their taxpayers from the partisan 2017 Tax Law."

As for the clarification that businesses could treat charitable contributions to such state programs as deductible business expenses, Cuomo contends that White House "political allies promptly took credit for this change in course, while independent tax experts struggled to find a discernible principle of law governing" the different treatment for businesses and individual filers.

Additional litigation threat: In his letter to Acting IRS Commissioner David Kautter (who was still heading the tax agency prior to Charles Rettig's confirmation last week), Cuomo threatened to sue the IRS for what he called "an arbitrary and capricious abuse of government power."

"The American public needs confidence that this power is exercised fairly, free of political influence that favors some taxpayers and causes over others. I urge you to resist the immense pressure to veer from this course. And you can rest assured that, if you do not, we will explore all options available to us including objecting to these rules and pursuing litigation."

New York, along with New Jersey, Maryland and Connecticut, already is a plaintiff in the federal lawsuit seeking to kill the TCJA's SALT cap.

I vaguely remember a case a few years ago where due to late changes some taxpayers were allowed to use prior law since they didn't have time to adjust their planning. An a la carte tax code is an interesting idea. Maybe more people would file if they had more choices. I'm sure the IRS would hate it, but technology could account for the variables. And tax pros would have another service to offer! And feel free to vent about taxes here at any time!

Maybe everyone would be happy if they had the option to file under the old rules with the higher rates. It just appears to me that some people want all of their deductions along with the lower rates and they are the same bunch that favored limiting deductions and increasing rates in the past. Thanks for allowing me to vent.

Kevin, you're probably correct that AMT and Pease took care of high earners, but now with the limit, even middle-income folks whose homes have appreciated greatly while their incomes haven't. In Texas, we have no income tax (but can write off sales taxes paid), but at least here in Central Texas our property values have skyrocketed, meaning we have large real estate bills. It's the classic case of house rich, income poor(er) and now the SALT cap cuts into the tax break. It's the same in similar neighborhoods in NJ and NY where the GOP representatives are hearing from their constituents. There is a strong Democratic states correlation, but the SALT tax hit is not limited to rich liberals. Kay

I find it ironic that liberals are suddenly concerned with wealthy people losing tax deductions. It was the Democrats that gave us Pease limitation. I wonder how Cuomo and others would have reacted had the SALT limitation had been passed by a Democrat administration. I am guessing a fair amount of taxpayers in high tax states were getting little or no benefit from their SALT deductions in the past due to Pease and AMT. I don't recall any similar uproar over those limitations.