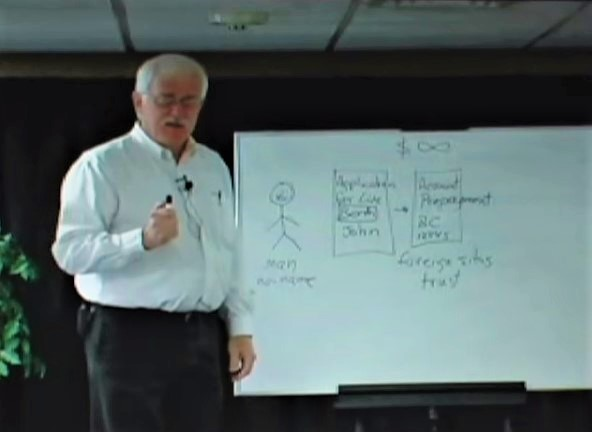 Winston Shrout believes he's an alien with Biblical origins who was sent to Earth to destroy a particular group of Catholics.

Last week, a Portland judge determined that despite Shrout's out-there delusions, the 70-year-old is competent to face sentencing on guilty verdicts on 13 counts of issuing fake financial documents to banks and six counts of willful failure to file tax returns.

During his 2017 trial, prosecutors introduced evidence showing that between 2009 and 2014, Shrout earned $562,224 from a carpentry pension, plus royalties and payments for his financial seminars. Shrout was convicted, in part, of failing to file tax returns for those six years.

Those six tax evasion convictions are worthy, thanks in large part to Shrout's bizarre claims, of this week's By the Numbers honor.

And Shrout's case also offers valuable lessons on what to look out for when someone approaches you promising, shall we say, creative ways to lower your tax bill.

OK to face legal ramifications: According to reports in The Oregonian newspaper and OregonLive.com, a court-appointed psychiatrist found that Shrout's delusions don't rise to the level of a mental health disorder.

Unfortunately for Shrout, his own defense-hired forensic psychologist didn't help him much. That mental health professional diagnosed Shrout with grandiose delusional disorder.

But that condition, according to the defense's psychologist, doesn't prevent the self-proclaimed sovereign citizen from assisting in his case and understanding the legal proceedings.

Neither am I going to get into a discussion of the serious problems that many individuals and our society as a whole face due to mental illness.

But as someone who's closely followed tax scams for much of my professional career, I am not surprised that a person who believes in the sham sovereign citizen argument and who sells that idea along with other questionable schemes to a gullible public suffers from delusions of grandeur.

The extent of Shrout's delusions were on full display during his trial last year where, acting as his own attorney, he took the stand to tell the jury that he was a non-resident alien — and not, in this case, an extraterrestrial one — who hadn't paid taxes for about 20 years.

After a three-day trial, the jury convicted Shrout of all 19 financial and tax criminal charges.

Despite the jury's decision, Shrout's sense of importance apparently prompted him to advertise on his website an upcoming seminar — scheduled for just days before his Oct. 22 sentencing hearing — detailing his financial techniques. The cost is $570 per attendee.

"You're just playing with your future when you engage in this," said U.S. District Judge Robert E. Jones during Shrout's competency hearing, holding up one of the convicted tax felon's seminar advertisements.

Many Shrout-like tax schemes: There are lots of folks who share Shrout's opinion on paying taxes.

There also are lots of similar schemers looking to take your money by selling scams as ways to reduce or avoid taxes.

Don't fall for any of them.

In a variation of this argument, taxpayers argue that although they are citizens of the United States, for the purposes of the Internal Revenue Code they are non-resident aliens and are subject to taxation only on income that is connected with the conduct of a trade or business. The 11th Circuit rejected this contention as frivolous.

As for seminars, both online and in person, like those promoted by Shrout, the IRS has included such schemes for years on its annual Dirty Dozen tax scams list.

"Promoters of frivolous schemes encourage taxpayers to make unreasonable and outlandish legal claims to avoid paying their taxes. Time and again, these arguments have been thrown out of court," says the IRS.

True cost of tax evasion: Remember, when you fall for a con promising you creative ways to lower or eliminate your tax bill, you'll be out more than the cost of such fake seminars.

The IRS has a long list of frivolous arguments — more than 40 — with which it could charge offending taxpayers. And, warns the tax agency, the current list is not all inclusive. The IRS and the courts may add to it at any time.

And, of course, criminal tax prosecution also is a possibility. If the IRS goes this route, you could be joining Shrout, who faces up to 15 years at his sentencing, and his compatriots in jail.