As for the first round of tax laws embodied in the Tax Cuts and Jobs Act (TCJA), taxpayers, tax pros, many lawmakers and even the Internal Revenue Service are still sorting exactly what the tax code changes mean.

Big and small biz tax breaks: The latest example is the Section 199A deduction. This 20 percent deduction for certain qualified business income ostensibly was created to give certain small businesses, known as pass-through entities, the same type of tax relief that major corporations got thanks.

Pass-through business income is reported on, or in tax parlance passed through, the small business owner's individual income tax return. This could mean a top tax rate, under the TCJA, of 37 percent.

Meanwhile, the new tax law slashed the tax rate of major corporations from 35 percent to 21 percent.

But, as it usually often the case with taxes, unforeseen circumstances arise.

Tax folks who focus on the obligations of both small and large business point out that while the 199A regulations released this week by the U.S. Treasury and IRS offer some help, many unanswered questions remain.

he 199A deduction also is shaping up to be a political focal point in the GOP's broader 2.0 tax effort.

Take, for example, the Institute on Taxation and Economic Policy's (ITEP) graphic analysis of which U.S. taxpayers are the biggest beneficiaries of the TCJA cuts.

Slicing the tax break pie: According to data from the Joint Committee on Taxation and put into the pie charts below by ITEP, millionaires will receive most of the benefits of the 199A deduction, which was championed as a tax boon for small businesses. 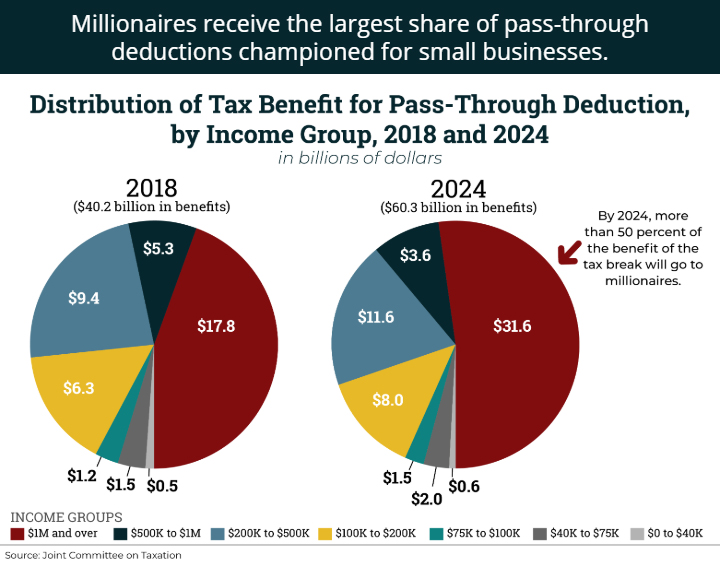 That's just one of 12 graphics ITEP has put together to illustrate what the Washington, D.C.-based tax policy group says is the  new and proposed tax cuts' role in growing income inequality.

The jury is still out on whether the TCJA and potential 2.0 changes will, as the GOP argues, lead to economic growth sufficient to boost the overall U.S. economy and improve the status of all taxpayers in all income groups.

And there won't be a verdict by the time voters head to the polls in November. So get ready to hear lots of these arguments as we head toward the midterm elections.

I wish I could say this was an unpredictable result.