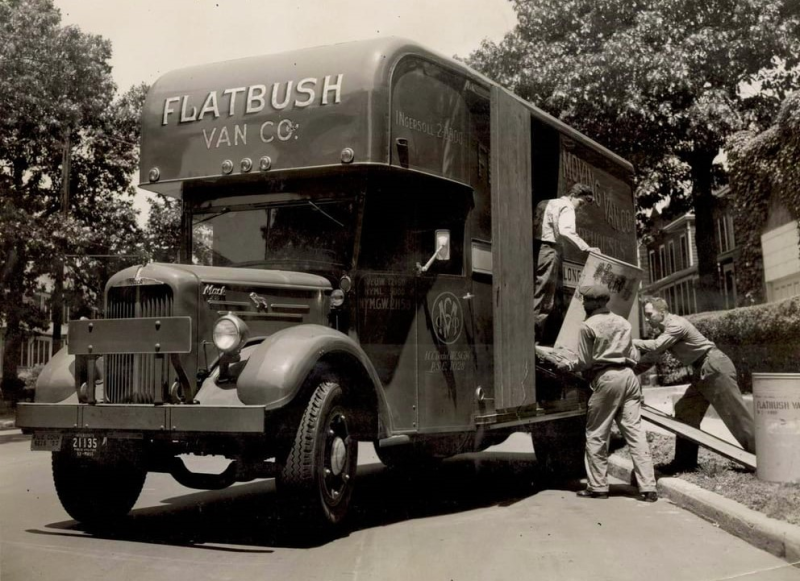 Americans have always been mobile, as evidenced by this vintage photo from Flatbush Moving in Linden, New Jersey. Now some folks say they're relocating because of new tax law limits on deductions.

Now that the Treasury Department and Internal Revenue Service have made it clear that they will restrict state efforts to work around the new $10,000 cap on the deduction for state and local taxes (SALT), some folks are looking at other options.

Among them, according to a New York Times story, is to move. (Unfortunately for them, the new law also, for the most part, ended the tax break for relocating. But that's another post, specifically this one.)

NYTimes reporter Julie Satow looks at why the SALT cap is a major relocation motivator in today's Saturday Shout Out piece.

She says that nearly half of Manhattan's taxpayers have taken SALT deductions in the past, with the average deduction topping $60,000 a year.

The five-figure write-offs come from the property taxes on pricey New York real estate, as well as the Empire State (and Big Apple) taxes on incomes.

More than just taxes: But the Tax Cuts and Jobs Act (TCJA) limit on these combined taxes isn't the only change that's prompting New Yorkers, and Big Apple residents in particular, to pack up and hit the road for less taxing environs.

Under prior tax law, interest for mortgages up to $1 million could be claimed as an itemized expense on Schedule A. Now the home loan cap is $750,000.

And all told, she writes, citing a Tax Policy Center analysis, more than 8 percent of New York State residents will face higher taxes under the new law in 2018. The percentage with bigger tax bills jumps to 29 percent for those in the top one percent of earners.

So sorry for the rich. Not: I hear you. It's hard to feel sorry for really rich people who'll be paying bigger tax bills.

All tax law changes mean that there are winners and losers. This time and in these specific cases, some rich folks in New York and their wealthy counterparts across the country in California, are the designated tax losers.

Some political gurus are quick to point out that many of the costly TCJA changes affect states, like New York and California, that tend to vote Democratic in national elections. They contend that the new law is a political swipe at these states, which is not a good way to craft tax policy.

However, I suspect that quite a few of these rich Empire and Golden State residents, are Republicans. Folks who make lots of money, regardless of where they reside, tend to favor the GOP because, at least traditionally, that's the party that's offered them tax breaks.

That's still the case with the TCJA.

Other breaks for the wealthy: Despite the hit these high-income folks will take on some SALT and home-related deductions, they also will benefit from the new law's lower top tax rate.

Also, the capital gains tax rates were left in place and adjusted to reflect the new tax rates. Most richer folks are big investors who benefit greatly from this component of our tax code.

Plus, there's talk about indexing capital gains rates, which would be a major tax break for long-term investors.

Not-rich hit, too: Some merely middle-income but home-rich taxpayers also could take a hit here, including folks in decidedly not Democratic-leaning states.

These are people, like me and my neighbors here in deep red, no-income-tax Texas, whose homes have appreciated nicely.

We are acutely aware of the ever-increasing property tax costs of our residences every year. Now we're dealing with the reduction of our federal tax deduction for these taxes.

Again, tax rates across the board have been cut, so maybe things won't be so bad when the final numbers are run next spring.

But right now, when people are looking at their latest real estate assessments and/or tax bills (along with their income or sales taxes paid) that no longer will be totally deductible, they're not real happy with the TCJA.

But are they unhappy enough to move like the folks in the New York Times story? The fuller answer to that will be played out over the next few years.