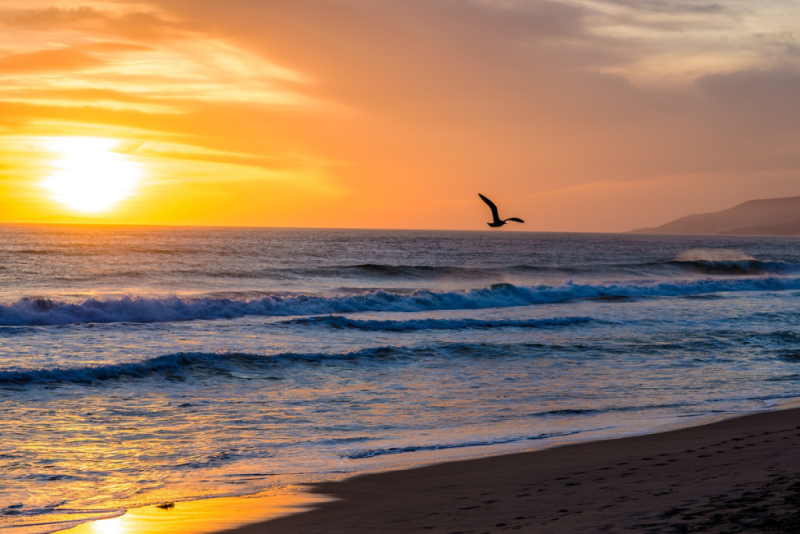 Sunsets like this one at Zuma Beach in Malibu, California, make many Golden State coastal properties prime rental investments. But Golden State limits on property taxes on inherited homes cost cities and other jurisdictions billions of dollars. (Photo by Alex Beattie via Flickr CC)

Californians love Proposition 13, the grandfather of tax-limiting ballot initiatives. Since its passage in 1978, it has kept a tight cap on property tax increases.

But an expansion of the original Prop 13, enacted eight years later, and its unforeseen consequences have cost Golden State school districts, cities and counties of billions of dollars in revenue, according to an investigation by the Los Angeles Times.

Tax break bequest for real estate heirs: The original property tax initiative passed 40 years ago limits property taxes to 1 percent of a home's taxable value based on the year the house was purchased.

The real estate isn't reassessed for tax purposes until it's sold. Then its market value, i.e., the purchase price paid by the new owner, resets the tax value to which the tax cap is applied.

This added tax break was designed to protect families from sharp tax increases on the death of a loved one. It extended Prop 13 tax cap advantages to inherited property, even when the real estate that heirs receive is used as rental, not residential, property.

This has allowed Californians to use their inherited homes as investment properties, notes the L.A. Times, often renting choice properties for monthly amounts that are many times more than the limited annual property taxes they owe under Prop 13 and its subsequent laws.

Rents much more than tax bills: Reporters Liam Dillon and Ben Poston cite as an example the Malibu beach home inherited by actors Jeff and Beau Bridges and their sister, which they advertise for rent at $15,995 a month.

The home's annual property tax bill last year, according to the story, was $5,700.

The newspaper calculated that the tax break allowed the Bridges to avoid paying $300,000 in property taxes they would have faced if the house had been reassessed when they inherited it in 2009.

The Bridges family is not alone in legally benefiting from the property tax limit law.

The newspaper found that in in Los Angeles County, as many as 63 percent of homes inherited under the system were used as second residences or rental properties last year.

That trend also was noted "in a dozen other coastal counties where prime vacation spots in Sonoma and Santa Cruz have some of the highest concentration of homeowners receiving the benefit."

More than celebs benefit: Celebrities aren't the only ones benefiting from this property tax break that only California offers.

"The inheritance tax break," write Dillon and Poston, "has allowed hundreds of thousands — including celebrities, politicians, out-of-state professionals and some of California's most prominent families — to avoid paying the higher taxes owed by newer homeowners."

Even out-of-state residents who inherit pricey and desirable homes are benefiting.

Tax breaks and inequality: The inheritance tax break's costs — the paper figures that Los Angeles County alone lost more than $280 million in property tax revenue last year; areas of Beverly Hills and Manhattan Beach could have collected an additional $7 million and $5.5 million, respectively — has ignited a new round of debate on at least that portion of Prop 13.

But are those amounts enough to prompt change?

Those who say the property tax break for heirs should be revisited argue that it is symbolic of, and has in fact exacerbated, California's growing income (and subsequent housing) inequality.

Thomas Hannigan, a former California state assemblyman who authored the inheritance tax break in 1986, admits he did not foresee the financial windfall it would produce for real estate heirs.

His proposal, he told the L.A. Times, was designed to level the playing field for families, regardless of income, as compared to businesses.

Under Proposition 13, companies could maintain low property tax bills on their buildings forever even as management — in effect, the company's owners — changed over time. Hannigan argued that families should be treated similarly when ownership changed via bequests.

Another ballot vote on the way? There is a move to rewrite Prop 13, but it doesn't affect individuals, either owners or heirs, and it won't happen, if at all, for several more years.

The new proposal, which could be on California ballots in November 2020, would tax California business and industrial properties based on regular assessments of their value. There would be exemptions for small businesses, vacant property intended for agriculture or housing, and the owners of apartment complexes.

If the Prop 13 revision ballot initiative is eventually approved by Golden State voters, the regular reassessment of business property values could raise collective corporate tax bills by billions of dollars.

That could help offset the billions lost when California homeowners rent their inherited residential properties.

And speaking of those billions of dollars, the state law — Proposition 13 — that keeps tax collectors' hands off those forgone property taxes is this week's By the Numbers figure.

Nice post! It extended Prop 13 tax cap advantages to inherited property, even when the real estate that heirs receive is used as a rental, not residential, property.

I wanted to leave comment to tell you that this was a very good Article.It is always nice to Read articles like this very informative & the ideas were very well presented .I would recommend your Articles to anyone. Thanks for Sharing

In MD we have a homeowner's tax exemption that indicates that property taxes, regardless of reassessments, can only rise 5% per year on the same homeowner.

I believe families, if they want to hang onto the house and maintain the exemption, usually transfer the house into a trust.

My home has never fully approached the value of the house in 2007 so my exemption, which was once about 25% of the full property tax bill, is now about 12%.
My last assessment was effective 7/2015, and increased the home value about 15% over the 7/2012 assessment. Since it is phased in over three years, my property taxes have increased by about 5% each of the last three years.

Other side of the coin: My home's assessed value went down about 30% based on the 7/2009 assessment from the 7/2006 one. My property taxes did not decrease at all because as a practical matter all that happened was that my homeowner's exemption decreased.