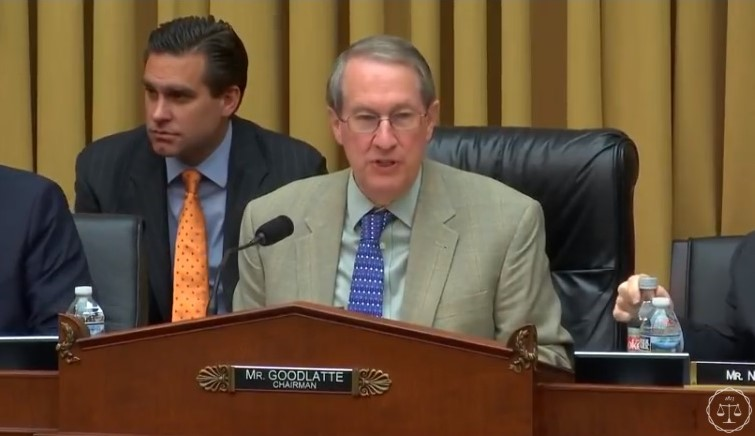 Rep. Bob Goodlatte opens the hearing on what Congress should do about interstate sales taxes and remote sellers in the wake of the Supreme Court decision that upended prior standards. (House Judiciary hearing video screenshot)

If you thought the interstate collection of sales taxes from remote sellers was going to get easier following the recent high court ruling on the matter, think again.

Now Congress is getting involved. Again.

And if you thought any decision on how federal lawmakers should address the thorny issue of taxes and interstate commerce would be easy, think, yes, again.

Long and winding remote sales tax road: Capitol Hill has been trying to establish a federal framework to deal with taxes and interstate commerce in the internet age since online shopping morphed from an oddity to the primary shopping method of millions of consumers. I first blogged about the tax implications and legislative efforts back in July 2010.

It seemed for a while that the House and Senate would come to an agreement, but those efforts stalled in 2016.

That moribund legislative effort is getting new life, following the Supreme Court of the U.S. (SCOTUS) decision in the South Dakota v. Wayfair case that gives states more leeway in taxing sellers who aren't based or don't have facilities within their borders, in their states.

The June 21 ruling overturned the prior standard, set in 1992 when the justices then signed off on the physical presence rule of Quill v. North Dakota. That earlier decisions prevented tax collection from out-of-state sellers with no physical presence in the taxing state.

That reversal means that online and other remote sellers nationwide could face are myriad potential problems in dealing with the 45 states and the District of Columbia that have sales taxes. So they're encouraging Congress to step and provide some more consolidated guidance.

First hearing following SCOTUS decision: The House Judiciary Committee took a step in that direction this morning at its first post-Wayfair hearing.

"The dominant issues under debate in this case involved policy, not law. The briefs filed with the Court were filled with discussions of economics, the efficacy of software, trends in the retail industry, and myriad other non-legal questions. Congress is the appropriate institution to resolve these policy questions, not the Supreme Court."

He reiterated that sentiment in his opening statement today, citing the ruling's "potential to unleash chaos for consumers and remote sellers." In announcing the hearing, Goodlatte also referred to his proposal, in which he sets out seven internet sales tax principles he would like be met.

Many, and mixed, legislative messages and measures: Both witnesses and lawmakers at the hearing were split on whether Congress should act following the Wayfair ruling and if so, how much.

Some want firm tax rules from Congress. They point to a collection of bills currently awaiting Congressional action. They are the:

Act now to set limits: Grover Norquist, president and founder of Americans for Tax Reform, supports Congressional action. He testified today that the high court essentially has told taxpayers that "yes, you can be taxed by politicians you do not elect and who act knowing you are powerless to object."

Norquist favors "bright-line nexus standards that prevent states from reaching across their borders to force out-of-state businesses or individuals to comply with their tax codes – whether it be collecting, remitting, or paying taxes."

The Business Activity bill, noted Norquist, establishes a clear physical presence standard for taxing multistate businesses engaged in cross-border transactions. The Mobile Workforce measure reduces state tax burdens on nonresident employees. It passed the House in June 2017 (again; it also made it that far back in 2012), but is still awaiting Senate Finance Committee consideration.

Wait and see what states do: Others say let the situation play out in the states under the new rules set by the SCOTUS decision. Ranking Judiciary Member Rep. Jerry Nadler (D-New York) was among the more cautious.

"First, the federal government should not intrude on state tax policy," said Nadler in his opening remarks. "Although Congress has a constitutional responsibility to ensure the orderly function of interstate commerce, it is also obliged to respect the sovereignty of the states to determine their own sales and use tax policies, in accordance with the input of local electorates."

Nadler also noted that "the Wayfair decision provides states with a clear road map for passing and enforcing laws that do not discriminate against, or unduly burden, interstate commerce. These features include a safe harbor for sellers with limited transactions within the state; prohibitions against retroactive enforcement; and adopting simplified and uniform tax systems that reduces administrative and compliance costs."

You can watch the tape of the hearing (it's gaveled to order at the 3 minute, 25 second mark).

You also can read the prepared testimony of the witnesses, which included representatives of tax policy think tanks and retail groups, state tax organizations, an attorney and a small business owner. (Links to the remarks are on the Judiciary's website page with the video of the hearing.)

Others who didn't make it to the hearing to speak let the Judiciary Committee know their thoughts via written remarks. They include the leaders of 12 policy groups who signed a letter to the panel heads and written testimony from the Tax Foundation on its suggested actions Congress should take post-Wayfair.

It's a lot to take in, which is why it is likely (and unsurprising) that it again (yes, one more!) will be a while before we get any substantive action from Capitol Hill on how states should handle their sales taxation of remote sellers.