The reason was a decision this week by Rettig's future boss to ease most nonprofit donor disclosure requirements. 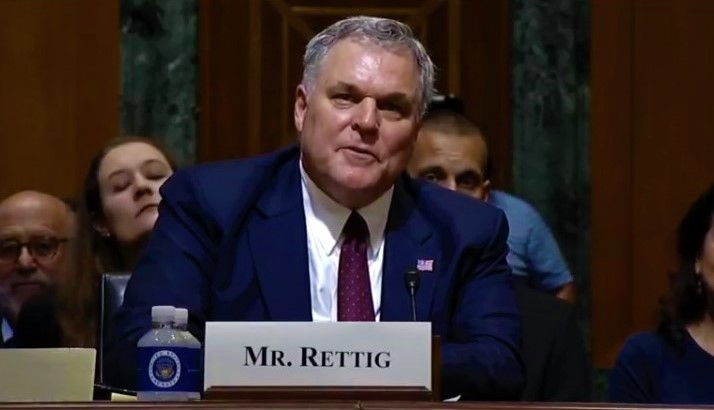 Charles P. Rettig, nominated to be the next Internal Revenue Service commissioner, faces the Senate Finance Committee during his June 28 confirmation hearing.

The Senate tax-writing committee was supposed to vote Thursday, July 19, morning on sending Rettig's nomination to the full chamber for confirmation. It was a much anticipated procedural step, since the the top IRS slot has been vacant for eight months.

But the vote was postponed for several hours after Senate Democrats skipped the original session to protest of the nonprofit reporting change.

The delay was not a total surprise. Opponents of the move were vocal in announcing that Rettig's nomination could become embroiled in the policy move protests.

It the Treasury move also underscores how the question of whether the IRS was politically motivated in approving nonprofit status applications, a matter that ostensibly was wrapped up last September when a Republican Justice Department refused to take additional action, is still simmering on Capitol Hill.

And the decision to veil some nonprofit donors got added attention after the arrest of Russian national Maria Butina on charges of trying to infiltrate one such group believed to be active in U.S. campaigns.

One of the beneficiaries of the change will be 501(c)(4) social welfare nonprofits, which were at the center of whether the IRS/Tea Party scandal that erupted in 2013. Charitable groups given IRS 501(c)(3) status, which are the public nonprofits to which taxpayers give deductible donations, are not affected by the new policy.

Mnuchin said the revised policy will save public and government resources and prevent the accidental release of confidential information.

Opponents of the reporting change, however, quickly countered that it will allow the variety of politically active nonprofits — such as 501(c)(4)s like the NRA, labor organizations designated as 501(c)(5)s and 501(c)(6) business leagues like the U.S. Chamber of Commerce — to anonymously give money to political campaigns, giving them a power that was not intended when their not-for-profit tax statuses were created.

Spilling over to Rettig: Wyden is one of those unhappy with the move.

The day after the Treasury announcement, the Oregon Democrat said he would vote against Rettig unless the California tax lawyer promises to reverse the disclosure change.

Then today, Wyden and his fellow Finance Committee Democrats emphasized their opposition to the nonprofit policy by not showing up for the planned hearing vote on sending Rettig's nomination to the full Senate.

It finally was completed this afternoon, with the panel narrowly — on a party line 14-to-13 vote — agreeing to forward Rettig's nomination to the full Senate.

Nominee's qualifications not questioned: In Rettig's defense, the vote was not a reflection on him or his qualifications. Lawmakers on both sides of the aisle agree that the Golden State attorney's legal and tax credentials are impressive.

"I can understand, perhaps, because of the comments made here today that [Democrats] have very distinct irritations with the president, but that should not stop us from getting a good IRS commissioner," Hatch said.

"The Trump administration has taken a qualified nominee and dumped him right into the middle of a dark money political firestorm of their own creation," said Wyden. He also called on the Finance Committee to hold a hearing on Treasury's new nonprofit reporting guidance.

No date has been set for the Senate vote on Rettig, who once confirmed will service as IRS head into November 2022.