An historic interplanetary business trip 49 years ago prompted an astronaut to submit some travel expenses to his NASA bosses. Such claims still happen every day for more Earth-bound business travelers, but a tax break for unreimbursed work-related expenses is gone. 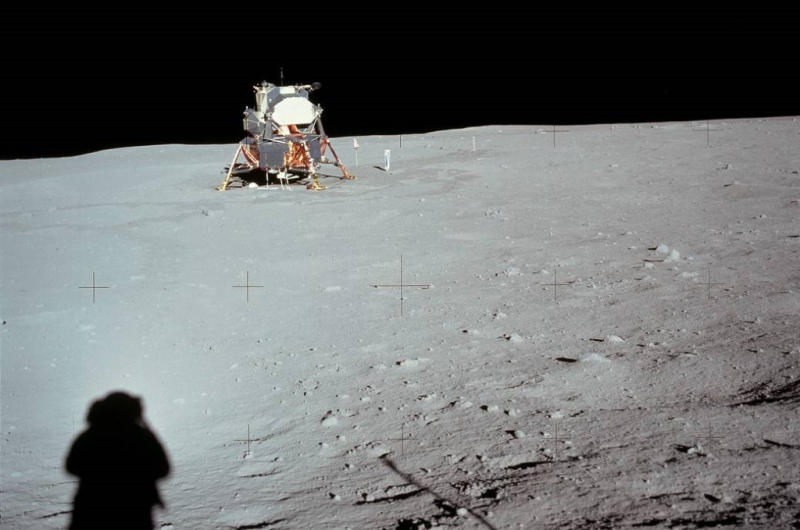 Neil Armstrong, the first man to walk on Earth's Moon, photographs the lunar module at Tranquility Base on July 20, 1969. (Photo courtesy the National Aeronautics and Space Administration/NASA)

On a hot July afternoon 39 years ago today, my brother and I were ordered to come in from our play in the West Texas sun so that we could watch American astronauts land on the moon.

As I recall, my little brother got bored and wandered off. But I, who in my youth had dreams of becoming an astronaut (until I realized how much math that involved and that my bad vision would preclude me), remained transfixed, sitting for hours until Neil Armstrong took that giant step for mankind. (My brother was brought back for this viewing, too.)

On this day in @NASAHistory, the first humans set foot on the Moon during #Apollo11. With more than half a billion people watching on television, Neil Armstrong and Buzz Aldrin went where no one had gone before. Explore archived images and stories: https://t.co/nDeJ6NOOHi pic.twitter.com/DBheVJBhAU

Many years later I had the privilege of getting to know somewhat Michael Collins, who stayed in the moon-orbiting command module Columbia during the lunar expedition. I worked in the government relations office of a U.S. defense company and Mike, as he insisted everyone call him, was friends with my boss, who let the history-making NASA astronaut use one of our suite's offices.

Collins was, and I'm sure still is, such a gracious person, always willing to share his time. Such inclusiveness underscores Collins' explanation of why the patch for the United States' first lunar landing did not include the crew members' names:

The third Apollo 11 astronaut and the second person to walk on the moon was Edwin "Buzz" Aldrin.

He and Armstrong spent less than a day — 21 hours and 36 minutes — on the moon surface before climbing back into the module and reuniting with Collins. But it was a glorious 21 and a half+ hours, not just for them, but to every proud American who watched the triumph of science and courage on that magical day.

Moon travel paperwork: A few years ago, Aldrin also revealed that he has a sense of humor about his historic moon trip.

On July 26, 2016, @TheRealBuzz as he's known on Twitter, noted that "47 years ago I submitted my travel voucher reimbursement for my trip to the moon. #Apollo11"

47 years ago I submitted my travel voucher reimbursement for my trip to the moon. #Apollo11 pic.twitter.com/DHAXEYVTHi

There also was the customs form (below) that Armstrong, Collins and Aldrin had to fill out upon their return to the United States. 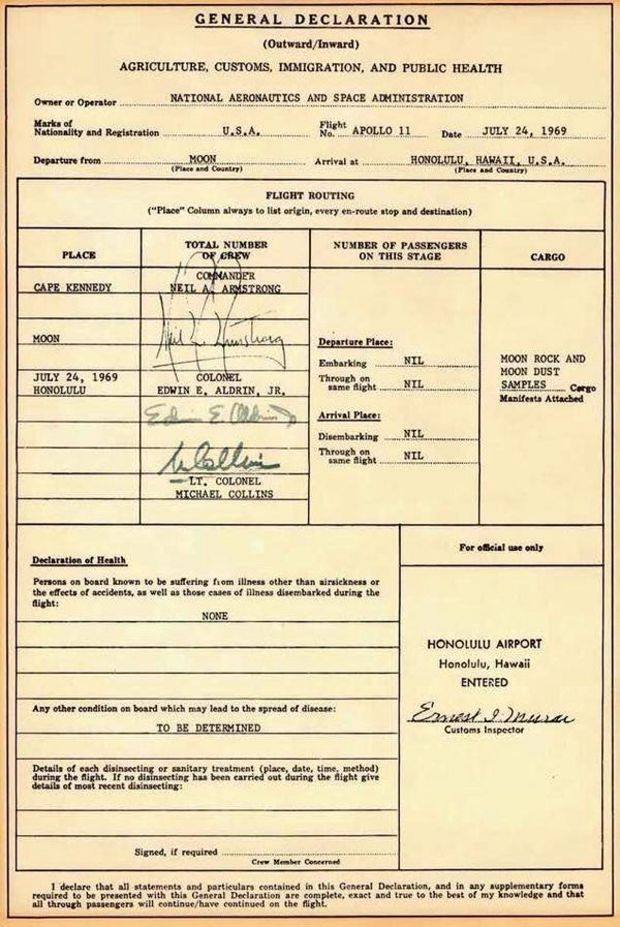 The Apollo 11 crew, like all travelers who venture beyond U.S. borders must do upon their return, had to declare what they brought back.

But instead of the usual international tchotchkes stuffed into carry-on bags, the trio listed things that Customs agents had never before encountered: Moon Rock and Moon Dust Samples.

Interstellar expenses: Aldrin was a bit more lighthearted with his expense reimbursement request.

He noted that his round-trip itinerary was from Houston, Texas, to Cape Kennedy, Florida, to the moon to the Pacific Ocean to Hawaii and back to Houston.

And Aldrin didn't try to pad his expense account. He acknowledged that most of the travel was covered by the government, including, such as they were, meals (who remembers Tang!?) and lodging.

But, he noted, he did spend $33.31 on 100 miles of official terrestrial travel in his own auto in and around the Florida launch site.

Unreimbursed costs used to be tax deductible: While Aldrin's and his colleagues' business trip literally was out of this world, it shares the same basic characteristics of most work-related travel.

You go somewhere to conduct business required for your job and you get reimbursed by your boss for your related on-the-road expenses.

Sometimes, though, businesses decide that certain employee travel claims don't warrant repayment from the company coffers. In those cases, the worker had — note the past tense; more on this in a minute — the option to claim these unreimbursed job expenses as a personal itemized deduction.

It wasn't an easy or very lucrative itemized deduction.

In addition to keeping receipts and filling out Schedule A, the claiming worker had to make sure that the business expenses and any other so-called miscellaneous expenses were more than 2 percent of his or her adjusted gross income.

Then only that amount in excess of the percentage threshold could be claimed.

Now workers don't even get that.

Tax reform ends some travel claims: Under the Tax Cuts and Jobs Act, the miscellaneous deductions section of Schedule A is gone.

Quick note since some have asked. This does not change self-employed business claims. If, for example, you're a sole proprietor who files a Schedule C, you can still claim your legitimate business expenses there.

But employees who don’t get full reimbursement from their bosses no longer can claim, at least for tax years 2018 through 2025, that unpaid amount as an itemized deduction.

If you'd been claiming these out-of-pocket items, sorry.

Now that you no longer can use this tax break, it's a good time to talk with your boss about possibly revising the company's employee reimbursement policy.