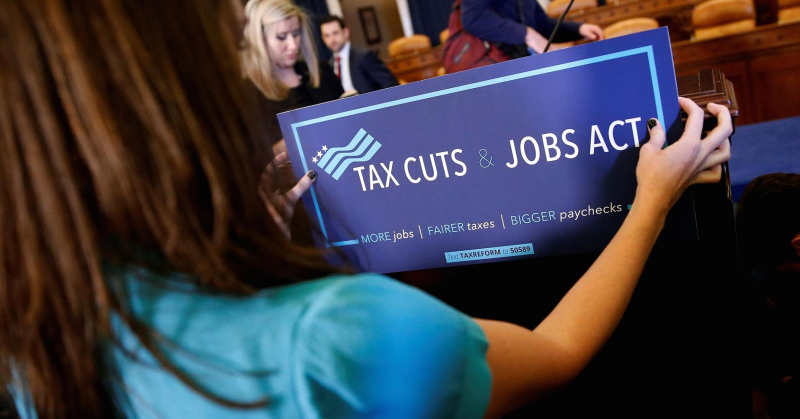 Republicans unveiled their outline for additional tax changes on July 24 and it's just that. A bare bones framework.

House Ways and Means Committee Chairman Kevin Brady (R-Texas) acknowledged the skimpy structure. That was by design, he said, with the outline to serve as a starting point for his GOP colleagues to offer feedback.

Yes, he said Republican feedback. As with the original Tax Cuts and Jobs Act (TCJA) that was enacted last December, Democrats were excluded from the legislative writing process.

Once things are fleshed out, Brady said he expects a Tax Reform 2.0 bill to go before the House in September.

Sorry, GOP Congressional staff, it looks like you'll be spending your usual August recess getting the new tax bill in shape for when your bosses return from their late summer vacations district work sessions.

Election-driven changes: Not to be too cynical, but proposals that focus on, as Brady was happy to point out, middle-class and small-business tax cuts just before a crucial midterm election is pretty darn convenient.

That approach looks to be tailor-made to counter the major Democratic rallying cry against the TCJA is that it disproportionately rewards big business and the wealthiest Americans.

And again, not to be overly suspect of the GOP's timing, but it also sorts its Tax Reform 2.0 sorts into three categories, each with a title that makes a great campaign trail tagline: Protecting Middle-Class and Small Business Tax Cuts, Promoting Family Savings and Spurring new business innovation.

Permanent tax cuts for all: As noted, opponents of the TCJA immediately latched onto the bill's apparent favoritism of big businesses.

They say the new tax law's huge tax break for big businesses — cutting the corporate tax rate from 35 percent to 21 percent — is a permanent part of the Internal Revenue Code.

Of course, we all know that nothing within Congress' reach is ever permanent as far as Merriam-Webster defines it. Rather, this means legislatively that the law, right now, doesn't have an ending date.

Meanwhile, note TCJA critics, its tax benefits for individuals and small businesses are temporary. They are set to expire at the end of 2025.

That complaint is taken care of in the first Tax Reform 2.0 section, Protecting Middle-Class and Small Business Tax Cuts.

Here, according to the GOP, this latest round of tax law change would make permanent many of the individual and small business TCJA tax breaks that are set to expire in seven years.

New and expanded savings: The next area of focus in Tax Reform 2.0, which the GOP outlines says in most instances is woefully inadequate.

More than half of adults don't expect they will be able to save enough to retire comfortable. A third do not have access to workplace retirement plan.

According to the Ways and Means leadership, the United States is falling behind when it comes to entrepreneurship. One way that Tax Reform 2.0 proposes to help encourage new businesses is to allow them to write off more of their initial start-up costs.

Just how much more is not specified. Neither are other proposals that the outline says would "remove barriers to growth."

Passage problems: While the House might be able to pass some tax bills before voters go to the polls on Nov. 6, such action is unlikely in the Senate.

That's why the Ways and Means' new tax proposals will be introduced as three separate bills, based on the areas highlighted in the outline: making temporary provisions permanent, bolstering savings and fostering innovation.

This legislative strategy will give the Senate, where the slim GOP majority will need Democratic help to get the 60 votes needed for passage, more flexibility in deciding which of the measures, if any, to consider.

But some Republicans in both the House and Senate also might balk at the added costs of Tax Reform 2.0. The provisions that would make the now-temporary tax cuts permanent are estimated to be around $600 billion.

Costs be damned: Then there are those who think that 2.0 doesn't go far enough.

And, of course, if any Democrats get to make suggestions, there's the wish by California, New York and New Jersey lawmakers to reinstate full state and local tax (SALT) deduction.

Brady is urging patience, at least among his fellow Republicans.

"We're going to consider those [GOP] ideas and they certainly haven't been excluded from 2.0," he said. The matter is timing.

Here, lawmakers make changes to the original bill to clear up areas, for example, where the text of the law doesn't reflect lawmakers' intentions. The rush to get the TCJA on the books before the end of 2015 created many such situations.

House Speaker Paul Ryan (R-Wisconsin) has said that technical corrections would come to the House floor during the post-election lame duck session.

The reason for the delay in clearing up these confusing tax areas, said Ryan, is because Democrats are unlikely to support the corrections before the midterms. Again, that 60 vote margin will be needed in the Senate.

Flashback to the Affordable Care Act passage, where it was created and enacted without any Republican support. Democrats admitted back then that Obamacare, as it was quickly dubbed, needed some follow-up legislative work. However, Republicans refused to go along with any necessary changes, leading to many of the issues we currently face in connection with the health care law.

Rather than learn from mistakes, it looks like extreme political polarization will again rule.

And that again means, we'll have to see what happens on Nov. 6 to get an idea of how easy or difficult and Tax Reform 2.0 and technical corrections to the original will be.