If you're on the road today, sorry.

AAA is projecting a record-breaking 46.9 million Americans will travel 50 miles or more away from home this Independence Day holiday.

That's an increase of more than 5 percent over last year and the highest number since AAA started tracking July 4th travel 18 years ago.

And Tuesday, July 3, travel is the worst day to be hitting the highway, at least when it comes to major metropolitan areas.

INRIX, a global transportation analytics company, predicts travel times in the most congested cities in the U.S. could be twice as long than the normal trip.

Tax, not traffic, hassles: No worries, you say, you're not heading to a big city.

Well, while you might escape traffic troubles, you still could face some added travel taxes.

The timing isn't just to gouge drivers take advantage of summer, and particularly Fourth of July holiday, travel. July 1 marks the start of fiscal years in most states and new laws tend to take effect on that day.

Some of the gasoline and diesel tax increases are new. Others are a continuation of earlier fuel tax rate hikes that are being phased in over several years.

Here are the seven states where beginning this month your pump prices will be a bit higher due to increased state fuel taxes.

Indiana: The Hoosier State's gas tax rose 1.8 cents per gallon and diesel by 1 cent. Under a law enacted in 2017, both fuel taxes are updated annually to keep pace with inflation and the rate of personal-income growth. The overall price of gasoline also is taken into account, which is the reason why the gas tax is fractionally higher than the one for diesel fuel.

Iowa: The Hawkeye State's fuel tax rate rose 0.2 cents per gallon for fuels not blended with ethanol, also known as grain alcohol. This small hike, however, won't affect many drivers since most fuel in this corn-rich state is of the ethanol-blended variety.

Maryland: The Old Line State's gas and diesel rates each rose 1.5 cents per gallon this month. The hike is based on a 2013 formula that incorporates inflation and the price of motor fuel in the MidAtlantic state. 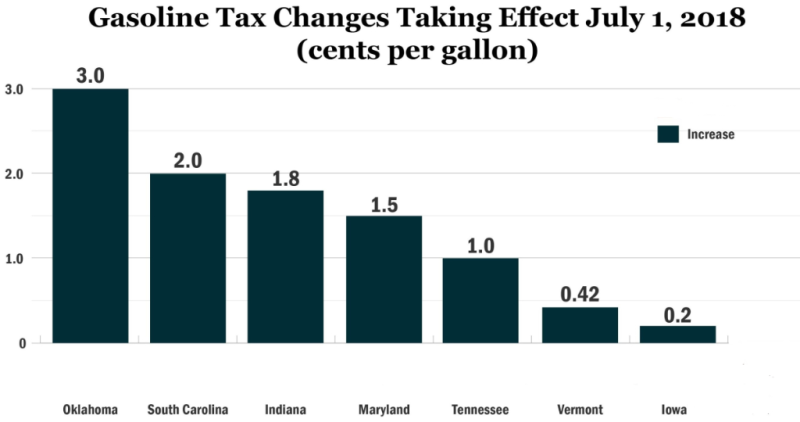 Source: The Institute on Taxation and Economic Policy (ITEP)

Oklahoma: The Sooner State's treasury is the big winner and its drivers the big losers as OK lawmakers hiked the gas tax for the first time since 1987. The state's gas tax went up by 3 cents per gallon; its diesel's tax was increased by 6 cents per gallon. The rate increases were prompted by teacher strikes cross the state earlier this year. The legislation authorizing the new fuel taxes ultimately will help pay for pay raises for Oklahoma teachers.

Vermont: The Green Mountain State's gas tax rose by 0.42 cents per gallon. Its diesel rate is unchanged. The hike was based on the price of gas, which has gone up in this area.

Unless you're making a mammoth cross-country trip that takes you to all these areas, a few more cents for fuel in these jurisdictions shouldn't put too much of a crimp in Fourth of July travel and celebrations.

But if you usually drive in one or more of these seven states, on this week's holiday break or the rest of the year, at least now you'll know why you're paying more for each tank refill.