Home Table of Contents Tax Tips Credits Deductions Refunds State Taxes Politics/Laws Tax Terms Archives
Some couples, whether wed in June or other months, could face a marriage tax penalty
A look at the proposed new Form 1040 and schedules 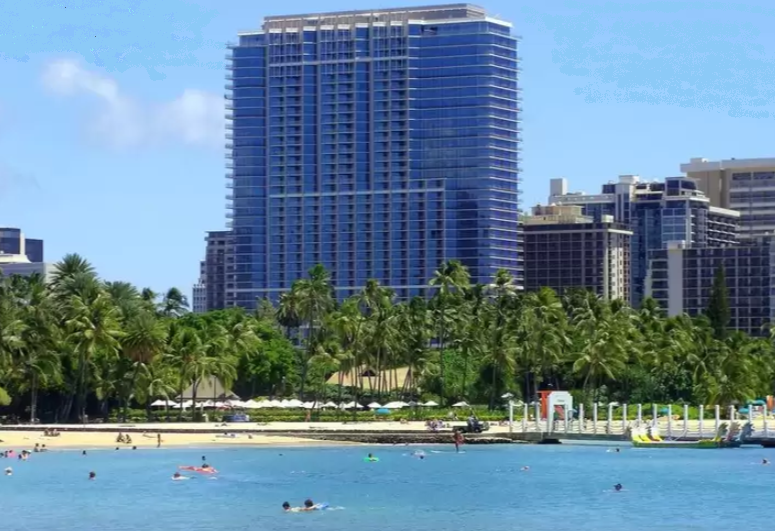 Charles Rettig, Donald Trump's choice to head the IRS, is expected to be confirmed, despite not originally revealing that he has an ownership stake in properties in a Trump-branded Hawaiian hotel. (Photo of Trump International Hotel Waikiki via Hotels.com)

The Internal Revenue Service may soon have a new commissioner, almost eight months after the last tax agency chief retired.

But before Charles P. Rettig gets his new title, some lawmakers want more information from him about his ties to Donald J. Trump.

Specifically, they want to know whether Rettig would maintain his independence from the man who nominated him.

That question took on greater import when Senate Finance Committee members reviewing Rettig's nomination discovered that the potential new IRS commissioner has a financial stake in two rental units at a Trump-branded hotel in Hawaii.

Disclosed…sort of: Rettig did not explicitly reveal that real estate connection via the Waikiki Trump International Hotel and Tower on his original financial disclosure form. The Trump Organization receives licensing income and management fees from Waikiki operations.

Instead, the Beverly Hills, California, tax attorney simply said that he has a 50 percent stake in "Honolulu, Hawai'i residential rental property." The Wall Street Journal reported that the two one-bedroom units, which generate rental income for Rettig, are assessed for property-tax purposes at about $1.1 million each.

$1.1 million times two is a hefty property appraisal amount. But for this week's By the Numbers figure, I'm going to go with Rettig's 50 percent ownership stake in the apartments since that connection was of more interest to lawmakers.

Trump ties vs. independence: "This administration often seems to be making tax decisions for political reasons rather than policy reasons, and that's a recipe for the kind of swampy corruption that makes people lose faith in institutions like the IRS," said Sen. Ron Wyden of Oregon in his opening statement before questioning of Rettig began.

Wyden, the ranking Democrat on the Senate's tax writing panel, also noted that he wanted assurance and evidence that Rettig would maintain independence form the Trump White House.

"That's important with any nominee, but it's especially relevant in Mr. Rettig's case, since he owns and rents out condos in a Trump-branded and -managed properties," added Wyden.

However, the properties were not discussed in detail during the public hearing. Rettig reportedly has agreed to provide the Senate committee with more information on the holdings.

Instead, Rettig was quizzed about a variety of tax matters, ranging from the new tax provisions in the Tax Cuts and Jobs Act to tax preparer regulations to Trump's still-unrevealed tax returns.

Rettig's IRS goals: If confirmed as IRS commissioner, Rettig said his "overriding goal will be to strengthen and rebuild trust between the IRS, the American people, and their representatives in Congress."

Such trust, noted Rettig in his opening statement, is critical, particularly now as the U.S. Treasury and IRS face the real-life implications of the "once-in-a-generation tax reform legislation" enacted last December.

"The successful implementation of that landmark reform law will be among my highest priorities," he said.

When asked about some of the more contentious and confusing provisions of that law, Rettig was consummately political, answering questions without, in most cases, firmly committing to a stance.

Instead, he repeatedly vowed to follow the tax law in an impartial and unbiased manner.

No position on SALT: That also was his stance when asked about the new $10,000 limit on state and local tax deductions.

Some states are seeking to work around that cap by letting cities establish charitable funds taxpayers would contribute to — and deduct in full as charitable gifts — in lieu of making the less-tax-deductible tax payments.

Sen. Sen. Robert Menendez, Democrat of New Jersey, tried to get Rettig to commit to supporting states' efforts, like in his own Garden State, to provide such funds or credits to regain lost property tax deductions.

Rettig didn't take the bait, saying only that he seeks "a resolution that universally people could say is the right resolution."

Similarly vague on tax pro regs: Rettig agreed that tax professionals should be "capable, competent, and able to understand the tax laws" and that training is critical.

He refused, however, to say whether he supports prior IRS efforts to strictly regular tax professionals.

'Not familiar with' Trump's taxes: And while Wyden did not follow through on his opening pledge to inquire about Rettig's Trump-connected properties, the Senator did ask about Trump's personal income tax filings.

During the presidential campaign and since his election, Trump and White House advisors have continued to assert that he cannot release his tax returns because he's been under continuous audit for 10 years.

"I find it incredulous that somebody could be under continuous audit unless they had made enormous mistakes on their tax returns over and over again," Wyden said. "How would one even get in a position like this?"

Rettig said he had no personal experience with any clients in such situations and that he is not familiar with Trump's returns.

He did note, however, that IRS examinations of more complex tax returns generally take longer to complete.

A step forward, but no firm timetable: Rettig was nominated for the top IRS position in February, so last week's hearing was finally a step in filling the slot.

Since John Koskinen completed his term in November 2017, David Kautter has been serving as acting commissioner. If confirmed, Rettig will serve as IRS commissioner into November 2022.

My earlier post when Trump tapped Rettig has details on the presumptive new IRS commish.

You also can watch the Senate Finance Committee video of the hearing.