What will the trade war with China cost you? The trade war with China is on.

At midnight on Friday, July 6, the $34 billion tit-for-tat between the world's two largest economies took effect.

But if China doesn't blink, the White House says it could ultimately impose charges on up to $500 billion of Chinese goods.

Business opposition continues: For months, potentially affected U.S. companies and the organizations that represent their economic sectors have been warning that tariffs, which many see as added taxes, will not effectively change unfair trade practices.

In May, more than 100 associations representing U.S. retailers, manufacturers, farmers, agribusinesses, technology companies and others in targeted products' supply chains stakeholders let the U.S. Trade Representative know of their concerns.

"There is no way to scope tariffs such that they would not impose direct and indirect costs on U.S. imports, inputs and exports in a way that strains the global supply chain and drives prices up," wrote the business representatives.

Gambling on long-term results: Donald J. Trump and his like-minded Commerce Secretary Wilbur Ross acknowledge that there will be some U.S. tariff pain. But they contend it will be short-term and result in better trade deals over the longer term.

Republican members of Congress who are facing reelection on Nov. 6 hope that's true. They also hope the wider trade view is getting through to voters.

Anecdotally, it seems that 45's supporters, even those whose small businesses are already taking tariff-related hits, are still on board the Trump Train. But things could change if any individual benefits from the GOP's tax bill, which the party had planned on helping smooth its midterm electoral situation, are offset by tariff-driven higher prices.

Tallying your tariff costs: There's also an added political concern since the items China has put on its initial tariff list are produced primarily in areas of the country that were key to Trump's election.

The Wall Street Journal has created an interactive map (static image below; click it to go to the original) that shows just how much China's tariffs will cost each U.S. county. 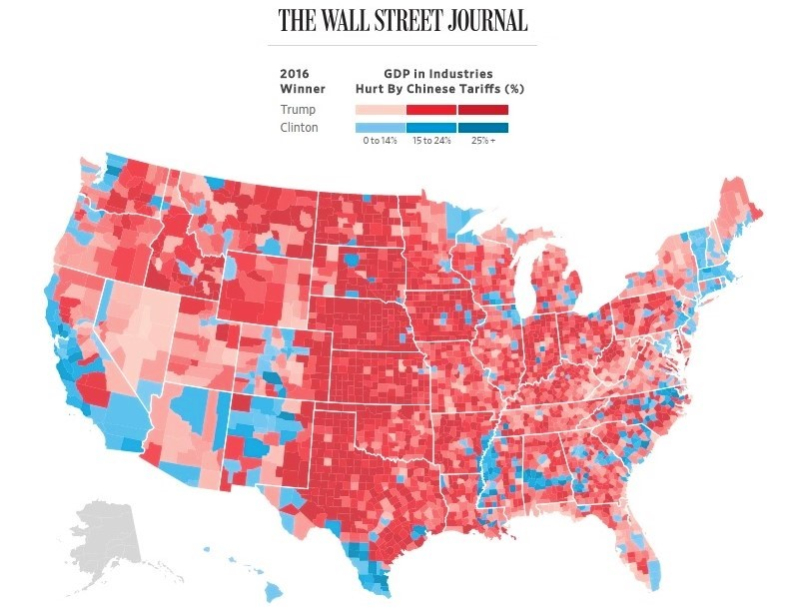 The U.S. Chamber has developed a similar interactive tariff tool.

The national business group's map looks at the tariff costs per state. It also includes potential costs of tariffs placed by Canada, Mexico and Europe, as well as China.

Here in Texas, for example, the Chamber says exports totaling $3.9 billion are in danger in a trade war. Not surprisingly, Texas will lose the most if its exports destined for Mexico — primarily pork products — are slapped with tariffs by our neighbors south of the Rio Grande. 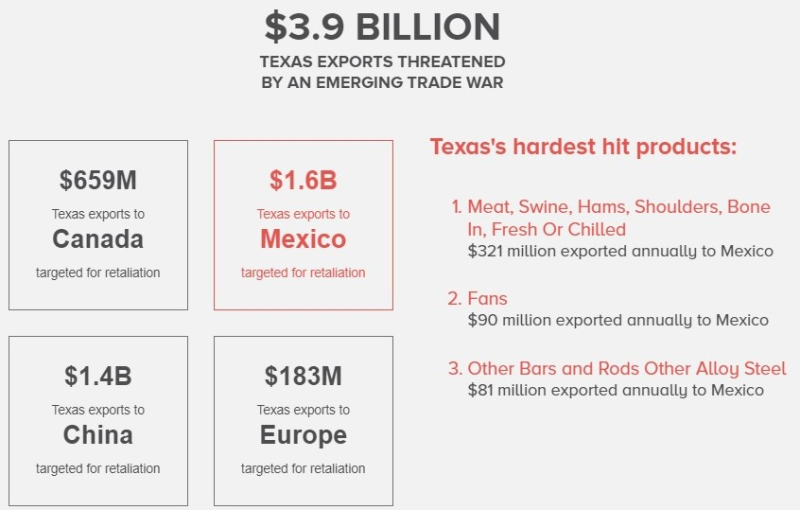 The cost of tariffs to Texas per the U.S. Chamber of Commerce interactive map. Click image above to go to the online analysis tool and find out how your state fares.

We're about to see if Trump's declaration that trade wars are easy to win is correct.

As the tariff skirmishes heat up, you can use these online trade tools to get an idea of the economic cost of the tariff battles where you live.