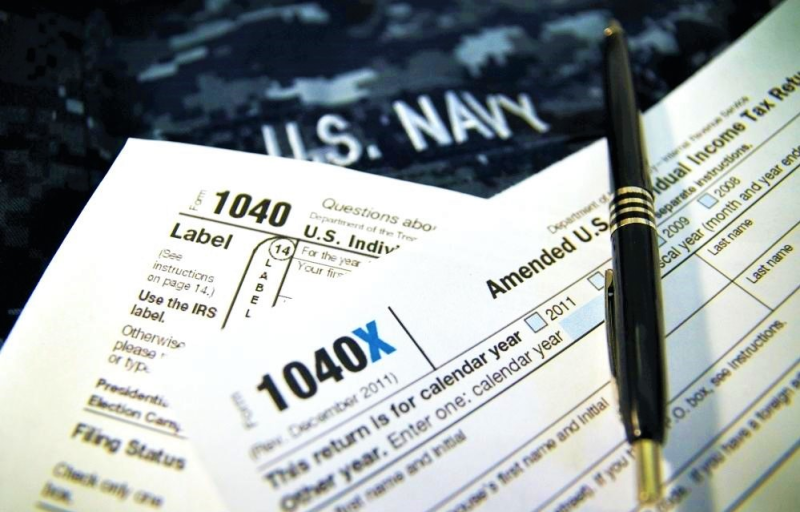 Some veterans who received disability severance payments after Jan. 17, 1991, and included that money as income when they filed their tax returns now are due refunds.

The former military members have known since February that they were due money. Now the process of getting it has finally begun.

But Uncle Sam isn't automatically sending former troops any cash due from the erroneously taxed payments.

Why now? If the vets paid too much tax almost three decades ago, why are they just now being told of the mistake?

The reason is the enactment of the Combat-Injured Veterans Tax Fairness Act, which became law on Dec. 16, 2016.

The Department of Defense (DoD), however, improperly withheld taxes on these payments from thousands of veterans, many of whom did not realized their payments were improperly reduced by the taxes. In other instances, affected vets reported the payments as income.

The injured veterans law extended the time that these affected veterans could file for refunds related to the improperly tax benefits.

One-year vs. three-year deadline: In most cases, the Internal Revenue Service accepts amended returns only within three years of the original tax filing.

However, the injured veterans law grants these taxpayers an alternative timeframe. They can correct their earlier filings within one year from the date they receive a letter from the DoD notifying of their potential tax overpayment on disability benefits.

The Defense Department now is sending these required letters to more than 130,000 veterans.

The letter will have information on how to claim the tax refunds to which they are entitled. It also covers a simplified method for making the claim.

Note, though, that this doesn't mean you'll get back an amount equal to the disability payment.

Any refund or credit you're due will be based on each veteran's individual tax circumstances for the year of the erroneously taxed payments. This includes any other income received and tax payments you made in the year your disability amount was paid.

Still, regardless of how much it will be, it is your money, not Uncle Sam's, so you need to get it back.

Simplified claim amounts: Veterans who wish to file a tax overpayment claim based on the actual amount of their disability severance payment should follow the 1040X instructions in filling out that form.

Or vets can use a simplified method. In these cases, veterans can choose to claim a standard refund amount based on the tax year in which they received the severance payment. Those amounts, which should be entered on line 22 of the 1040X, are:

All three of those dollar amounts are this week's By the Numbers honorees.

Be sure to also write “Disability Severance Payment” on the amended return's line 15 where it asks for the "other" reason for making the claim.

If you have all your filing documents and back-up material from as far back as 1991, you can use that to file Form 1040X in the usual way.

But for most veterans, it will be easier to claiming the standard refund amount for the erroneous taxation many years ago of their lump-sum disability severance payment.

A few other steps: When you file for your tax overpayment attributable to disability severance payments, write either “Veteran Disability Severance” or “St. Clair Claim” across the top of the front page of Form 1040X.

St. Clair refers to refers to the 1991 federal court decision that disability severance pay received for personal injury resulting from active service in the armed forces is not taxable income. St. Clair often is referenced in letters issued by DoD to those whose payments were erroneously taxed.

And yes, I typed write because, for now, all amended returns must be completed by hand and snail mailed to the IRS.

As for that mailing, send your completed Form 1040X and a copy of your DoD letter, to:

No letter, no problem: If you're a veteran eligible for a refund but didn't get a DoD letter, you still can file an amended return claim your money.

However, you must include both of the following to verify the disability severance payment:

If you don't have that documentation and didn't get a DoD letter, contact the Defense Finance and Accounting Services (DFAS) to obtain the necessary proof.

The IRS also has more information on its website about claims made under the Combat-Injured Veterans Tax Fairness Act, as well as well as some FAQ for these veterans who want to file amended returns.

Why are we paying taxes in interest from the money they took from us. What is going on. Here. It’s time to raise more hell about that. The IRS is nothing but a crooked government entity. It’s part of the Swamp.

Need help, date back to 2001. They taxed my severance and took out over $3,300. I had a friend help me fill this out, but numbers don't look right. My W2 had been amended to show income minus severance but they had already taxed me over 4k from Jan to Apr 2001. I did work after that so had to take taht income and taxes in consideration. I am lost and running out of time.

I received a check for 4587. Mine was for the $1750 for the year of Nov 1999. The formula can’t be %3 interest. If that was the case, I would be owed over 11,500. Someone please explain this to me. My email is jontescott79@gmail.com. Just don’t understand unclesams math. If we owed it to him, we sure would have to pay every cent owed to him

Can someone on this site tell how to fill out the 1040X?

How long has everyone been waiting for these to be completed? I sent mine in sometime in November and still haven't received it.

How do you find out if you are eligible

I did the leg work & filled out the amended form to get ALL of my money & I was pleasantly surprised on Monday when I opened a letter from the IRS containing a check for almost $25,000.00, over $16000.00 was interest. Yes I will have to pay taxes on the interest & I am working now to see if the state also owes me a refund.
I called the IRS & they sent me an account transcript for the tax year.
Oh yea ...mine was from tax year 1997 so dont let them tell you you cant get it !
Make the day count Y'all!!!

Hello,
Ive already received the standard refund of $3200. I am still due over $22,000, and am having a very difficult time figuring out how to complete the 1040x properly. I keep getting mine back, with a letter telling me I completed it incorrectly, but no information on how to fill it out properly.

Had an appointment with my local IRS office yesterday and they "Were not trained in that area" so no help. I called the number on my 6060A, and all they would tell me is I need to fill out and complete the 1040X. Went to HR Block last night, they were no help either.

Can anyone PLEASE tell me the correct way to fill this form out?

My case goes back to 1996. I filed the amended tax form at the standard rate of $1750. I received a check that included interest. It was somewhere around $6000. So, if I am reading things correctly, I have to now pay taxes on the $4250 that was received in interest from money they weren't supposed to tax me on originally? How in the world, in ANY world, is this even logical? Does anyone have information that directly addresses this scenario? I surely hope so....

You are correct Ms. Linda!

Started taxes today and went from an almost $5000 return to OWING $518 when I entered the interest amount from the Gov.

Can't believe it! Hope some news agency picks up on this!

I submitted the revision at the end of July 2018 and received a refund of $1750.00 plus interest at the end of September 2018. I was not expecting the interest, so receiving a check for nearly $7000.00 was a complete shocker. Now, as I am sitting down to do my taxes, I am finding out that the interest payment received is taxable. I call BS on that but according to Ms Tabor at the IRS it is taxable. I just went from getting a refund to owing. Trying to wrap my mind around this - received a refund because I was not suppose to be taxed on that money and because of their error I am to pay taxes on their penalty. How can this be right and in the intentions of what this Act was for - we are being penalized AGAIN! Am I missing something here?

I don't understand what the problem is, just hope they will be fair in returning fund that due.
SSG L. Taylor
Retired

Mr. Nelson, if you don't mind my asking, when did you file yours, and when did you receive the mailer from the Dept. of Treas?