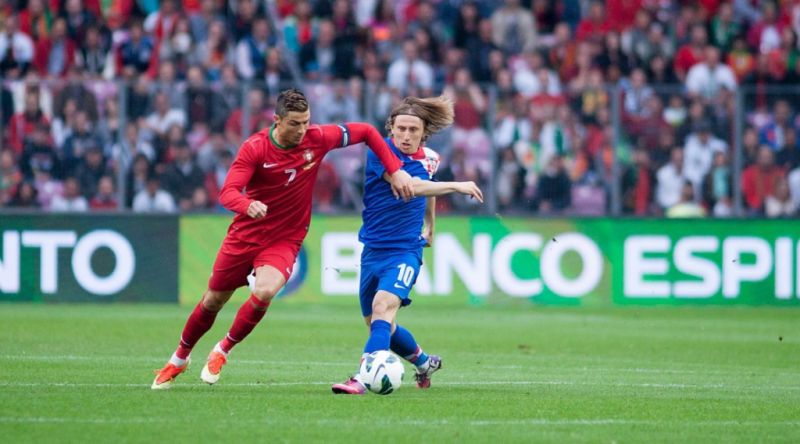 Real Madrid teammates Cristiano Ronaldo, left, and Luka Modrić go against each other in a Portugal vs. Croatia friendly match in June 2013. (Photo by Fanny Schertzer via Wikipedia)

I'm not a soccer or World Cup fan, but many of my social media pals are. That's why my Twitter feed is full of updates on upsets and expected results from this year's tournament hosted by Russia.

But those sports fans have overlooked one thing. Some of soccer's — football to the world beyond the United States — biggest global stars also have faced serious international tax battles.

Portugal star fights with Spain on and off the pitch: Cristiano Ronaldo scored a hat trick in his native Portugal's World Cup game against Spain, the country where he currently makes his living.

But before that match, Ronaldo also had been going head-to-head with the Spanish government over allegedly unpaid taxes.

The 33-year-old Real Madrid footballer was accused last year of defrauding Spanish tax authorities of €14.8 million (more than $17 million U.S.) Tax officials allege that Ronaldo tried to hide money linked to image rights made between 2011 and 2014.

Ronaldo denies the charges, but offered in June 2017 to pay the government almost the full amount, €14 million ($16.3 million U.S.). Spanish authorities, however, back then refused the offer.

Spain's hard line apparently worked. The BBC has reported that Ronaldo has agreed to accept an €18.8 million (almost $22 million U.S.) fine and a suspended jail term to settle the tax evasion charges.

The final word on whether the deal is acceptable must come from Spain's tax agency.

Before Ronaldo's case, the sports and tax world focused on Argentine football star Lionel Messi. How wonderfully ironic that Messi and Ronaldo, who faced similar tax charges, also are rivals on the pitch.

Messi, who's come under fan fire during the World Cup for missing a late penalty shot in Argentina's tie with Iceland, was convicted of Spanish tax evasion charges in 2017.

Messi, who plays professionally for Barcelona, was found guilty of defrauding Spain of €4.1 million ($4.8 million U.S.) by using tax havens in Belize and Uruguay between 2007 and 2009 to hide earnings from image rights.

The World Cup star's father also was convicted for his role in the tax scheme. Both men paid fines to avoid Spanish jail time.