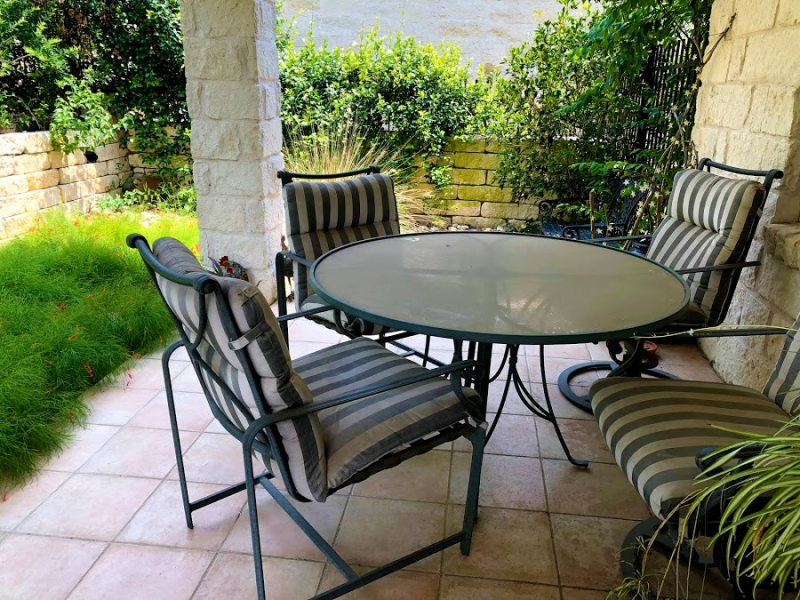 In preparation for the summer cookout season, the hubby and I have been sprucing up our patio.

The biggest job, aside from cleaning the thick layer of pollen off the outdoor dining table (yes, the hubby is appalled I'm showing that in the above photo), is replacing our almost 20-year-old patio furniture cushions.

We tried buying replacements at local outdoor stores. Then we went to a couple of big box chains. Finally, we found what we wanted at a reasonable price in one of the many gardening/outdoor living catalogs that fill up our snail mail box.

So we ordered them via the company's website. The e-retailer we chose is based in Scottsdale, Arizona. But since it has a store in Plano, Texas, the invoice inside one of the numerous shipping boxes included the 8.25 sales tax we owed. 6.25 percent of that collection ultimately will go to the Lone Star State's treasury, with the other 2 percent to Austin's tax collector.

States' e-sales tax battles: Since the etailer also had a physical nexus — that store north of Dallas — it met the current tax law as far as state and local tax jurisdictions' legal right to collect sales levies. That was determined in 1992 by the Supreme Court of the United Stated (SCOTUS) ruling in Quill vs. North Dakota.

This month, however, Quill could be tossed out and replaced by another SCOTUS decision. The country's highest court on April 17 (yes, federal Tax Day) heard oral arguments in South Dakota vs. Wayfair et al, those others being online retailers Overstock.com and NewEgg.

The Mount Rushmore State's law, which its officials admit was written in the hopes of getting the Supreme Court involved, says the state can demand remote sellers to collect and then remit to the state applicable sales taxes even if the seller doesn't have S.D. nexus.

The justices will decide, in what could be a legally ironic way, to end the national nexus requirement by letting South Dakota's no-nexus rule replace its neighboring North Dakota's nexus standard.

UPDATE: SCOTUS made it official on June 21.
States now have more leeway to tax remote sales.

Legal precedent, real dollars: If that happens, those who support throwing a wider sales tax collection net say that states and their affected local jurisdictions will collect billions in sales taxes they've been missing as e-commerce rapidly expended.

The U.S. Department of Commerce (via the Census Bureau) says that retail remote sales across the country for the first quarter of 2018 was almost $124 billion, an increase of 3.9 percent from the fourth quarter of 2017. Those e-commerce sales during January through March, adds the report, accounted for 9.5 percent of total sales.

That's a lot of sales upon which most states look longingly as a source of much needed revenue. For Texas alone, the added tax collection could come to $1 billion. That would mean, according to Texas Comptroller estimates, $800 million in sales tax revenue for the state and $200 million for cities and localities.

And those are a lot of numbers, making this week's choice for By the Numbers honor difficult. After much consideration, and because I already contribute to the amount collected, I'm going with the $1 billion in Texas remote sales tax collection potential.

A study conducted by the Government Accountability Office (GAO)at the request of Democratic Sens. Ron Wyden of Oregon, the ranking member on the Senate Finance Committee, and Jeanne Shaheen of New Hampshire, the ranking member on the upper chamber's Small Business and Entrepreneurship Committee, sheds some light on these increased tax collections and associated costs.

GAO's report, released last November and focusing on the 2017 calendar year, estimated that state and local governments could gain from about $8 billion to about $13 billion if states were given authority to require sales tax collection from all remote sellers. This is about 2 to 4 percent of total 2016 state and local government general sales and gross receipts tax revenues.

The average gain, according to the study, would be about $200 million.

Compliance, collection costs: As for the cost of bringing in those millions to billions in sales taxes, GAO examined the various costs typically associated with multistate sales tax collection. It grouped them into three broad categories: software related costs, audit and assessment compliance costs and costs associated with research and liability.

Meanwhile, larger companies that already have brick-and-mortar stores across many states in addition to remote sales, could easily scale up their current systems to included added collections.

And, noted GAO, there are state and national efforts underway or planned to help simplify tax collection for businesses. "These efforts show potential for mitigating the expected costs, but much depends on the specifics of any legal changes," according to the GAO report.

Congress' role in state tax collection: That's where Congress could come in. In the Quill decision almost 26 years ago, the Supreme Court noted that "the underlying issue is not only one that Congress may be better qualified to resolve, but also one that Congress has the ultimate power to resolve. No matter how we evaluate the burdens that use taxes impose on interstate commerce, Congress remains free to disagree with our conclusions."

Sens. Ted Cruz (R-Texas), Steve Daines (R-Montana) and Mike Lee (R-Utah) agree that it's government's legislative branch that has sole responsibility to make the sales tax call. They filed an amicus brief in the Wayfair case making that point.

But talk, and legal filings, are cheap. Again, look at all the bills introduced in the House and Senate over the years — notably the Marketplace Fairness Act, the Remote Transaction Parity Act and the Online Sales Simplification Act — to deal with interstate sales tax collection. None has made it into law.

Will the Wayfair decision, whatever it might be, finally prompt Congress to act on the interstate sales tax bills that have languished on Capitol Hill?

We'll know in a few weeks.

The fact that [most] online sales *haven't* been collecting sales tax is astonishing, in my opinion.

Sales taxes should be collected from online sales in either:
- the company's HQ state, or
- the state of the purchases (if they have a location there)

Why *shouldn't* sales taxes be collected from legitimate sales?