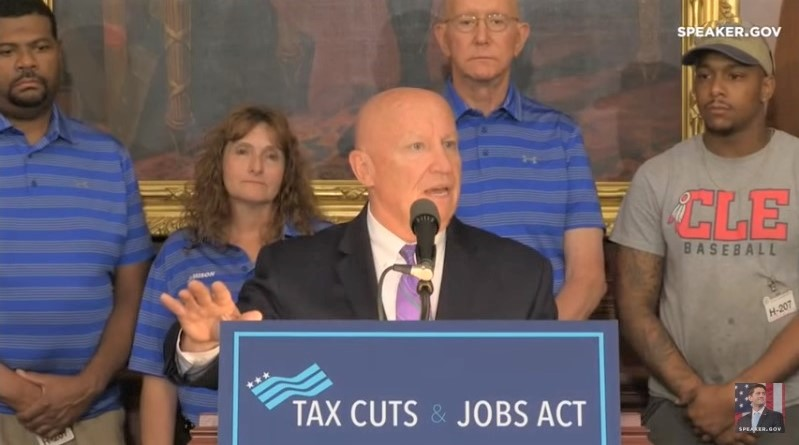 When the Republicans finally got the tax cuts they wanted in the Tax Cuts and Jobs Act last year, they viewed the changes as not only good tax policy but also a good political move.

The debate continues as to the efficacy of the changes as far as tax policy, but there's more of a consensus on its political possibility.

And the news is not good for the GOP.

Less tax law support: A Monmouth University telephone polled conducted in mid-June shows that only around a third of Americans (34 percent) like the law. That's a drop from the around 40 percent who supported the tax changes back in April.

In this latest survey by the independent Monmouth University Polling Institute, 42 percent disapproved, with 24 percent saying they're not sure how they feel about the bill.

All the numbers have shifted in this latest tax-law poll, but this week's By the Numbers honor goes to the 34 percent position figure.

Poll problems for political prospects: The latest Monmouth survey shows a notable shift in public perception over the past six weeks, according to the university's pollsters.

"Public opinion on the Republican lawmakers' signature accomplishment has never been positive, but potentially growing uncertainty about how American taxpayers will be affected does not seem to be helping the GOP's prospects for November," said Patrick Murray, director of the Monmouth University Polling Institute in West Long Branch, New Jersey.

More unsure now: Approval of the tax changes, which were signed into law in late December 2017, is down 6 points from 40 percent in late April

The one bit of somewhat good news for Republicans is that disapproval of the TCJA also is down a bit from the 44 percent who disliked the law in April.

Folks who previously liked or loathed the law apparently have migrated to the unsure category. The number of those surveyed this month and who offered no opinion on the plan rose 8 points from the 16 percent who were unsure about it in April.

That could mean they've not seen any appreciable personal benefits from the law.

Or it could mean that they're still waiting on Internal Revenue Service guidance regarding some of the more confusing individual and business tax provisions to see how or it affects them.

The indecision also offers politicians the chance to try to sway and firm up voters to their tax-law side before Nov. 6.

Recently, Republican lawmakers on Capitol Hill and the campaign trail have tried to highlight what they say are benefits for Joe and Jane Taxpayer in the new tax law.

However, those messages have been overwhelmed by GOP infighting over immigration policy and tariffs that many fear will lead to costly trade wars.

In March, 41 percent approved of the tax law, compared to 42 percent disapproval.

The figures were even closer immediately after the bill became law. In January, 44 percent approved and 44 percent disapproved.

Will the public, read voters', view of tax legislation climb closer to those more even numbers as the midterms approach? Possibly.

Election Day 2018 is still more than four months away and as we have learned during this presidency, a lot — a whole, whole lot — can happen. Every day.