Tax help or not, hurricane season 2018 is officially here

The 2018 Atlantic basin tropical storm season, which began early with Alberto's late May arrival, is now officially here. Get ready for possible storms. And note that tax law changes mean you might not get any tax help with your recovery efforts this year. 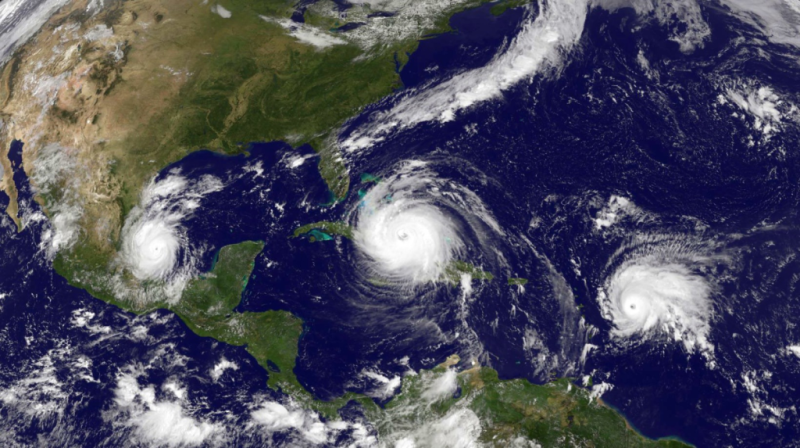 Remember this? A National Oceanic and Atmospheric Administration satellite caught Hurricanes Katia and Irma and Tropical Storm Jose (left to right) lining up on Sept. 8, 2017.

Mother Nature has her own calendar. She ignored today's official start of the 2018 Atlantic/Gulf of Mexico hurricane season by, in late May, creating Tropical Storm Alberto.

That storm made landfall Memorial Day afternoon along the Florida panhandle and then spread rain into more inland states. It is one of around a dozen expected this storm season, which runs through Nov. 30.

2017 effects still felt: The early start of the 2018 tropical season is not good news for Puerto Rico, which is still struggling to recover from the devastation wrought last September by Hurricane Maria.

In addition to the infrastructure issues still needing attention, a new study says that Maria is responsible for more than 4,000 deaths on the U.S. island territory.

Some parts of Houston, which sustained historic flooding damage from also-deadly Hurricane Harvey, also is still rebuilding. So are other cities along the Texas Gulf Coast.

The one piece of good news is that this year's storm count isn't expected to be excessive. Forecasters are calling for around the historic norm as far as storms that will form.

On May 31, Colorado State University weather analysts issued their revised hurricane forecast. The group now calls for 14 named storms (of which Alberto was the first) and six hurricanes.

That's a slight reduction from CSU's Tropical Meteorology Project original prediction on April 5 of 14 named storms, 7 of them hurricanes.

It's also pretty close to the 30-year average for the number of hurricanes and tropical storms in the Atlantic Basin.

Other seasonal forecasts issued in the run-up to the start of hurricane season include:

Uncle Sam's official projection from the National Oceanic and Atmospheric Administration (NOAA) sees 10 to 16 NS, 5 to 9 HU and 1 to 4 MH.

'Cane names: When the storms do form, they will get names.

Alberto already took the first moniker with his early arrival. The complete list of names for tropical storms or hurricanes this year includes:

Major disasters only get tax relief: If one of those monikers is given to a storm that rivals Harvey or Maria in destructive force, the folks in those area could be eligible for special tax relief.

But unfortunately, such an unwished-for consequence is the only way the tax code now will help due to changes under the Tax Cuts and Jobs Act.

Previously, individuals who sustained damage from a storm of any size could claim uninsured loss amounts as an itemized deduction.

This tax deduction, officially known as nonbusiness casualties and thefts, also was available for various claims of property losses, ranging from those caused by fire, shipwreck, other casualties or theft, including larceny, embezzlement, robbery and Ponzi-type investment schemes.

Now, however, such loss claims are more limited. The new tax law says that only losses attributable to federally declared major disasters can be claimed.

That tax law revision leaves folks in the unenviable position of hoping for all or nothing when it comes to storms. A moderate storm that does substantial, but not devastating damage, means the survivors are left to their own financial devices to recover.

Just takes one: Regardless of how many storms and hurricanes appear this year, remember the adage about it just taking one.

If that lone storm heads for or hits you, that's all that matters.

So get prepared now for what the 2018 hurricane season might hold. You can find some tips on getting ready for storm season in my earlier posts about storm and general emergency preparedness tax holidays in Louisiana and Texas.

Those special tax-saving shopping events are over, the items noted in the posts give you an idea of things to stock in came a 'cane heads your way.

You also can find more storm and disaster information at the ol' blog's special Storm Warnings page. This is a collection of blog post links on preparing for, recovering from and helping those dealing with major natural disasters.

Not to be a nag, but please do get ready now, physically and financially.

And when a storm is heading your way, stay tuned not only to the ol' blog, but also to your local weather and government officials. If they evacuate, do. I want all y'all coming back here to visit for a long, long time.