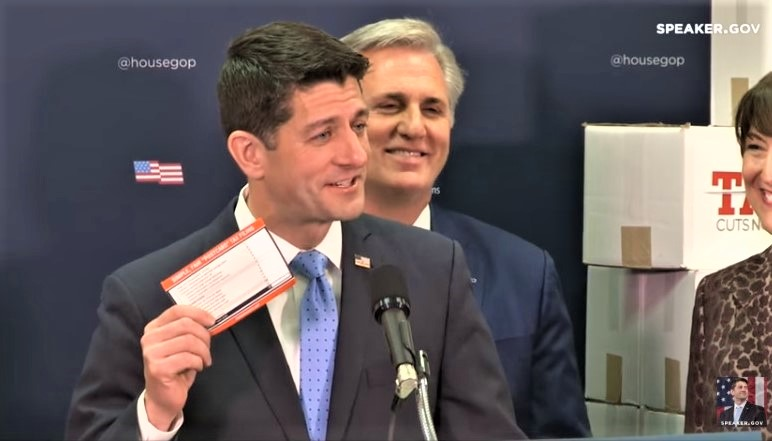 Every year the Internal Revenue Service makes tweaks to tax returns. Often it's simply updating annual inflation adjusted amounts. Other times it's adding or subtracting a line due to law changes.

But for 2018's filing material, there will be large-scale form alterations thanks to the major changes made by the Tax Cuts and Jobs Act (TCJA).

Among the new law's modifications for the 2018 tax year will be the actual size of the oldest of the tax returns, the long Form 1040.

Republicans say their long-promised postcard-sized version of Form 1040 is on its way.

The new IRS Form 1040 could be released as soon as next week, and it will be significantly smaller than the current version, according to Treasury Secretary Steven Mnuchin.

"It will be a postcard, as we have promised," said Mnuchin during a press conference this week celebrating the six-month anniversary of the Tax Cuts and Jobs Act. "Hardworking taxpayers won't have to spend nearly as much time filling out their taxes."

Time-saving postcard 1040: Taxpayers get a choice of three Form 1040 versions when they file their tax returns.

The Internal Revenue Service says the longest one, Form 1040, is filed by 68 percent of taxpayers. In its current two-page incarnation, a taxpayer needs around 15 hours to complete it, according to tax agency estimates.

The next easiest tax return, the Form 1040A, takes about half that time (7 hours), with the easiest Form 1040EZ requiring around five hours to finish.

If that sounds like more than you spend, note that the IRS return time estimates take into account not just actual form filling out and filing — which is four, three and two hours for the 1040, 1040A and 1040EZ, respectively — but also tax planning, record keeping and "all other" filing related activities. (For me, that includes various periods of yelling at my documents and computer screen.)

Still, any action that can reduce what for some is up to four hours just filling out a tax form is welcome.

Tax changes = tax form changes: The shrinking of the granddaddy of the tax return series is possible, as Mnuchin noted, because the new tax law did away with some current tax provisions that are reflected on forms.

However, other than saying the form would be a postcard, the Treasury didn't provide any other details.

One thing that definitely will be gone from the 1040 (and the 1040A, too) is the exemptions section. 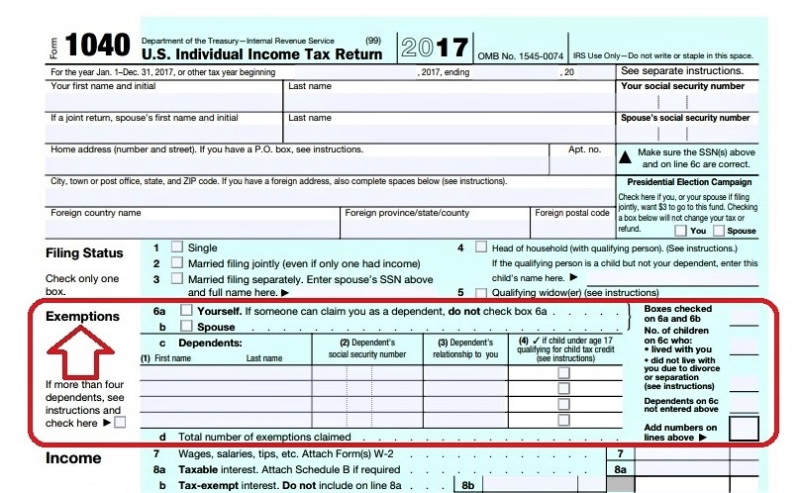 Don't worry. You'll still get to claim your qualifying dependents for other tax claims, such as the newly doubled child tax credit, the child and dependent care credit and the Earned Income Tax Credit, these dependents no longer provide filers the automatic personal exemption.

However, under the TCJA filers (and their spouses, if married) will no longer get the automatic personal exemptions for themselves and their dependents. On 2017 returns, that was $4,050 per person that they were allowed to subtract from their adjusted gross income on Form 1040 and 1040A (the exemptions are combined with the standard deduction on the EZ version) to get to a lower taxable income level.

The GOP says the loss of exemptions is made up for by the TCJA's larger standard deduction amounts and lower tax rates. Note, however, that if you still itemize, new limits there (yes, I'm talking about the $10,000 cap on state and local tax Schedule A claims) coupled with the elimination of exemptions could be costly.

But most folks don't itemize. Around 70 percent of taxpayers each filing season tend to claim the standard deduction. That trend is expected to accelerate under the TCJA. The Joint Committee on Taxation estimates that 61 percent fewer taxpayers will itemize their deductions in on their 2018 taxes.

Just the first draft: If you, like me, are feeling a bit trepidatious about the changes to the form you've filed for most of your tax life, don't freak out. At least not yet. 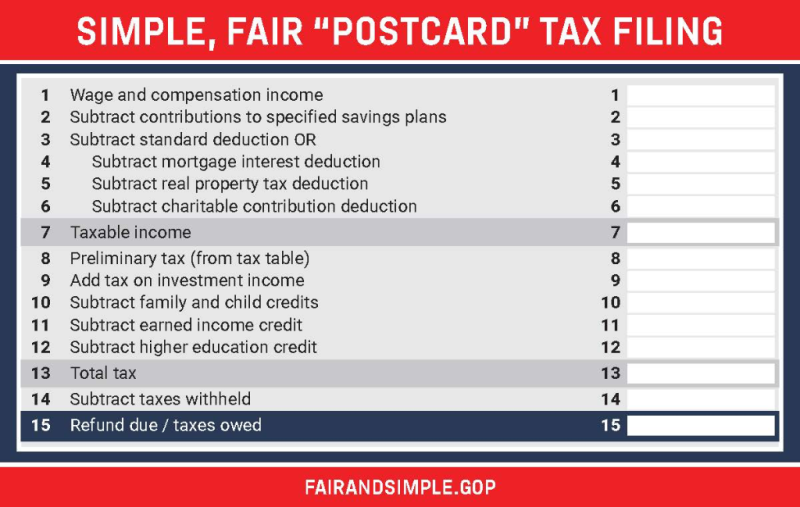 Ways and Means draft of a postcard tax return. Critics say this form is not as simple as it seems.

Leaders of the National Association of Tax Professionals (NATP) met with the IRS following the postcard form announcement and were told that while the new 1040 will be released next week, what we'll see might not be the final version.

Once the form is made public, there will an opportunity to provide feedback, according to NATP.

And not to rehash what is done, but I'm going to rehash. Such input from a broader tax world, not just lobbyists, in creating and pushing through the TCJA would have prevented many of the tax change interpretation and implementation problems the IRS, tax pros and taxpayers now are facing.

Real relief vs. political posturing: In addition to being a big worried about the changes, I'm also skeptical as to how much this will really help filers.

Folks who use the long 1040 typically do so because their financial, personal and tax lives are a bit more complicated. If they could, they would already be filing the simpler 1040A or 1040EZ.

Changing the way a form looks isn't going to change folks' tax situations. If your tax filing involves more than just the basics (wage income only reported on a W-2 and the standard deduction claim), then you likely will still have to file the usual array of additional schedules with your return.

Sure, a small 1040 will work well for appearances sake. The inevitable photo op, with Mnuchin or House Speaker Paul Ryan (R-Wisconsin) again holding up the formal postcard sized return, even if it's an oversized postcard, will show up in GOP political ads this fall.

Plus let's get real. The form isn't likely to make much practical difference to many filers.

Most folks file electronically, so they have no idea what their actual tax form looks like. Although, remember, you do need to save a copy of your returns even if you don't print them.

And for those few hardline, old-school paper filing holdouts, absolutely none of them is going to want to send in their taxes on a postcard.

It's a tax identity thief's dream, what with all your personal and tax data, including your Social Security number, right there on the exposed document!

Did he really say it would be a postcard, as they promised? Oh my… If that ever happens, I would consider it a strong signal that Armageddon is coming.

"It's a tax identity thief's dream, what with all your personal and tax data, including your Social Security number, right there on the exposed document!"

.....the very first thing that I thought of when I saw this photo. Ryan is pretty much a fraud, supporting the carnival barker POTUS.