Hawaiians got some relatively good news this week in connection with the continuing lava flow from Mount Kilauea.

The volcano is continuing to spew potentially deadly gases and pour flaming lava across a growing southeastern section of the 50th state's Big Island. The eruption, which started May 3, also is still producing explosions and earthquakes.

Now, however, the catastrophe has been declared a major disaster by the White House.

That is good tax news for affected residents, which is everyone on the state's largest island, also named Hawaii, as is the county designation.

Not only are they eligible for assistance from the Federal Emergency Management Agency (FEMA), the Internal Revenue Service says affected residents may qualify for certain tax relief.

And folks who sustained Kilauea-caused losses in excess of their insurance coverage now can claim those amounts as an itemized expense.

New tax law limits on disaster claims: Under prior law, that tax relief option was available under the Internal Revenue Code. The claim could be made even in cases where taxpayers sustained less severe storm damages, as well as in cases of losses from theft, burglary and auto accidents.

That broad tax deduction claim opportunity, however, ended with the enactment at the end of 2017 of the Tax Cuts and Jobs Act (TCJA). Now tax relief is available only when the president declares an area a major disaster area.

But with the major disaster declaration, affected Hawaii residents now can claim their volcano damages. They also have the option to claim them on their 2017 returns or wait and make the Schedule A claims when they file their 2018 returns next year.

The decision as to which tax year to file the disaster damages depends on (1) which tax year will give you a more favorable tax result, e.g., a larger refund, and (2) how soon you need the tax money to pay for recovery efforts.

You can find details on making such claims in this earlier story I wrote. The years and disasters in the article are dated, but the claim process remains the same for current major disasters.

More disaster filing info can be found in IRS Publication 547, as well as in Form 4684, Casualties and Thefts, and its instructions.

If you are making a volcano-related casualty claim, the IRS says to put the Disaster Designation, "Kilauea Volcanic Eruption and Earthquakes" at the top of the form so that agency employees can expedite the processing of your tax refund.

Expedited tax data requests: If you need your tax information from the IRS to complete your disaster claim, the IRS says it will waive the usual fees and expedite requests for copies of previously filed tax returns for affected taxpayers.

As with the actual tax filing, you should put the assigned Disaster Designation "Kilauea Volcanic Eruption and Earthquakes" in red ink at the top of Form 4506, Request for Copy of Tax Return, or, if appropriate for your needs, Form 4506-T, Request for Transcript of Tax Return, when you submit it to the IRS.

The relief applies to both individual taxpayers and business owners who live in or have companies in Hawaii County that have been affected or damaged by Kilauea. 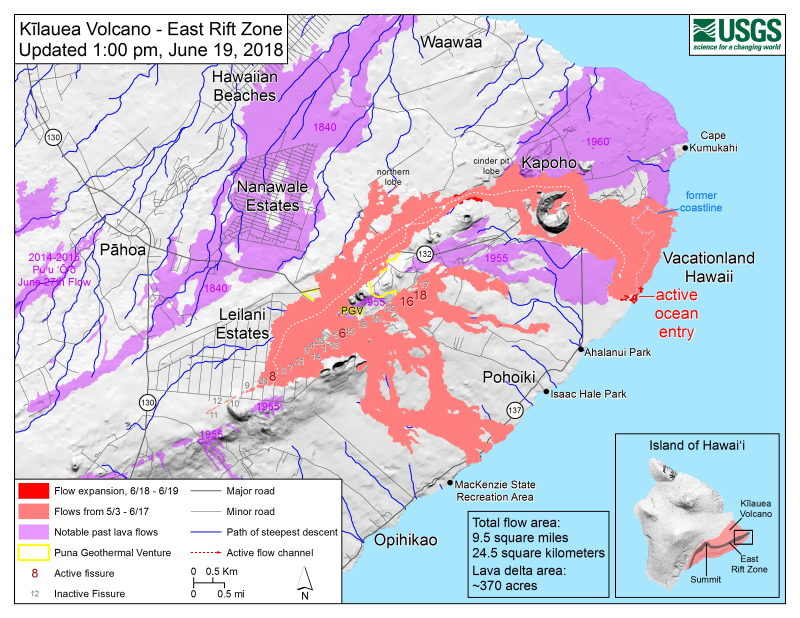 So are all relief workers in Hawaii as part of a recognized government or philanthropic organization effort to provide volcano aid.

Regular IRS relief: What qualifies? The first break is a postponement of certain tax deadlines for the affected Hawaiians.

In this case, tax due dates falling on or after May 3, 2018, and ending Sept. 17, 2018 are given special consideration. That means Aloha State taxpayers have until Sept. 17 to complete their tax tasks that fell/fall in this time frame.

The most obvious individual tax filing in this period was the June 15 estimated tax filing deadline. If you missed it, you now have three added months to file second 1040-ES payment.

The next estimated payment, due Sept. 15, also will be within the volcano tax relief period, giving Hawaii taxpayers a couple of extra days to make that payment.

Other Hawaii taxpayer filings that have either an original or extended due date in the May 3 through Sept. 17 relief period and are covered under this disaster relief ruling include:

However, the IRS says that the postponement of time to file and pay, does not apply to:

The IRS says penalties on employment and excise tax deposits due on or after May 3 will be abated as long as the deposits were made by May 18.

Automatic relief, penalty notice procedures: If you're in the covered disaster area, the IRS will automatically identify you by your filing address and apply filing and payment relief.

But affected taxpayers who reside or have a business located outside the covered disaster area must call the IRS disaster hotline toll-free at (866) 562-5227 to request this tax relief.

If you qualify for the extended filing relief but still get a late-filing or late-payment penalty notice from the IRS, the agency says to call the telephone number on the notice to have the IRS abate the penalty.

Finally, if you're a volcano-affected filer in the midst of an IRS audit or collections process, the IRS doesn't want to add tax insult to Mother Nature's injury.

In examination cases, if you're contacted by the IRS explain how Kilauea is affecting you so that the agency representative can give your case the appropriate consideration.