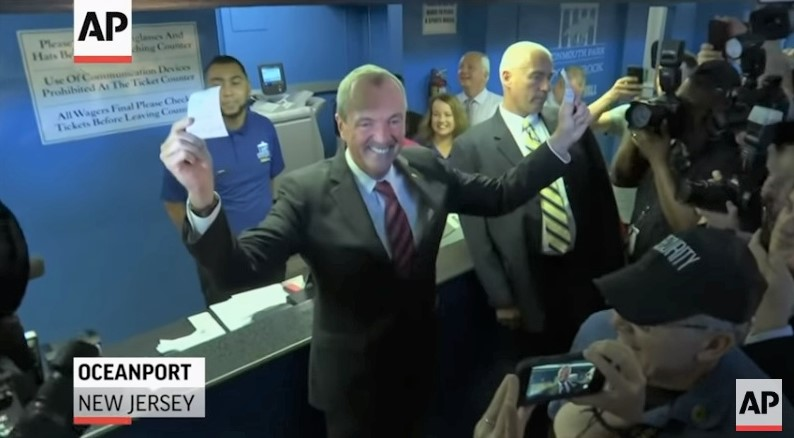 New Jersey started taking bets on sporting events on June 14, a month after the Supreme Court ruled in the state's favor and three days after Gov. Phil Murphy signed the law making his and, N.J. establishments hope, millions of other such wagers legal.

The debut of the new sports betting offering at casinos and racetracks throughout the state coincided with the start of the World Cup football (or soccer as it's known here in the United States) tournament.

Executive betting example: After affixing his signature to the new law, the Democratic chief of state took advantage of his position and placed the first legal sports bet in New Jersey.

In making sports wagering legal, Murphy lauded the effort as another way that N.J. casinos in Atlantic City and racetracks throughout the state to "attract new business and new fans, boosting their own long-term financial prospects. This is the right move for New Jersey and it will strengthen our economy."

Murphy forked over $20 at Monmouth Park racetrack on June 14 on a bet that Germany would win the international football/soccer competition.

It seemed like a pretty safe wager. Germany was the defending World Cup champion.

But today, Germany, which hadn’t been eliminated in the first round since 1938, ended up last in its group after losing to South Korea.

Maybe the governor's other, more local wagers — another $20 each on the New Jersey Devils to win the 2019 Stanley Cup and NASCAR champ and former Garden State auto racer Martin Truex, Jr., to take the green flag at the 2019 Daytona 500 — will pay off next year.

Taxes on winning wagers: If you're more of a bettor than Murphy, you're in luck tax-wise at least. The Tax Cuts and Jobs Act doesn't change the tax treatment of wagering.

The money you make on any and all bets, even the illegal ones if your state hasn't yet made sports betting available, is taxable income.

And if you're like Murphy and have some bad bets, hold onto to those slips and keep a record of all your gambling activities.

You still can claim losing amounts as an itemized deduction on Schedule A to offset your gambling winnings, as detailed in my earlier post on the lucky Texas woman whose Kentucky Derby bet paid off handsomely.