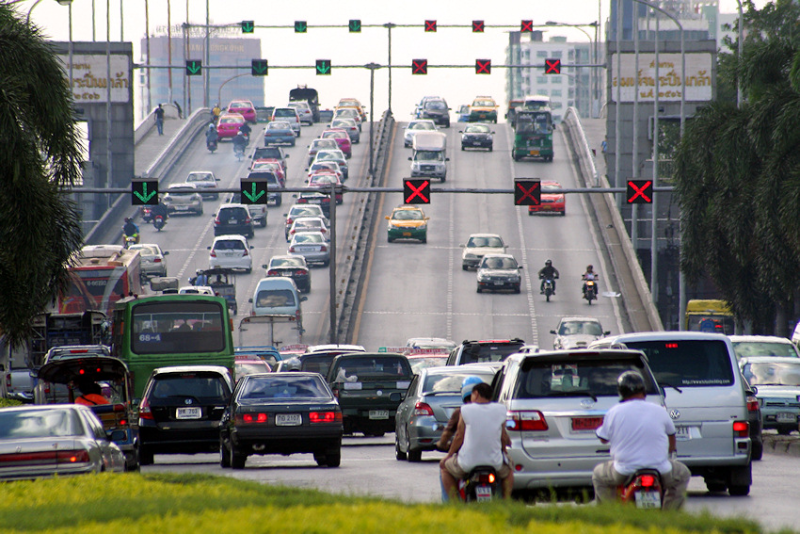 Tax law changes mean that some previously deductible miles can no longer be claimed. (Traffic photo by Jo via Flickr)

Back in March, the Internal Revenue Service announced revised inflation changes for many tax provisions that were affected by the recently-enacted Tax Cuts and Jobs Act (TCJA).

One area that didn't change, however, was the list of 2018 standard mileage amounts used to calculate the driving-related tax breaks associated with medical, business, charity and moving costs.

For the 2018 tax year, those cents-per-mile amounts are shown in the table below, along with the 2017 figures for folks who might be able to use them when they finally file last year's return that's been extended until Oct. 15.

Same amounts, different tax treatment: But while the previously issued 2018 deduction amounts for vehicular travel deductions didn't change, the IRS recently reminded us that some of these numbers no longer apply in certain taxpayers' situations.

Three of the mileage amounts are connected to itemized expenses.

The miles driven for qualifying medical reasons and in connection with an IRS-approved charity are still deductible on Schedule A.

That's not the case, though, for certain itemized business miles.

No more employees expense claims: In prior tax years (including 2017 for filers on extension), an employee had the option to claim on Schedule A their workplace expenses for which they weren't reimbursed.

In addition to writing off the costs of such things as such as uniforms, union dues and the deduction for business-related meals and entertainment, employees' travel miles also could be counted.

These expenses were tallied in the miscellaneous section of Schedule A. The amount of these allowable worker expenses that exceeded 2 percent of a filer's adjusted gross income counted as deductible itemized expenses.

That's no longer the case, however, under the TCJA.

The new tax law eliminates this Schedule A deduction for tax years 2018 through 2025. Therefore, the business mileage amount for 2018 doesn't matter in these cases.

Note, however, if you're an independent contractor and file Schedule C, you can still claim your business travel at the 2018 rate of 54.5 cents per mile on that form.

Military moves only: Another mileage-related tax break that used to be available to taxpayers regardless of whether they itemized or claimed the standard deduction also is gone, at least through 2025, under the TCJA.

I'm talking about the former (through the 2017 tax year) ability to write off miles driven in connection with a work-related move. For most folks who relocate in 2018 through 2025, this above-the-line deduction is gone.

It remains, however, for moving miles claimed by members of the active-duty U.S. Armed Forces who relocate in connection with a military order concerning service personnel's change of station.

If you used any of these driving deductions in 2017, be sure to note the differences now. You don't want to be depending on them and then discover that they're no longer of any tax use to you.