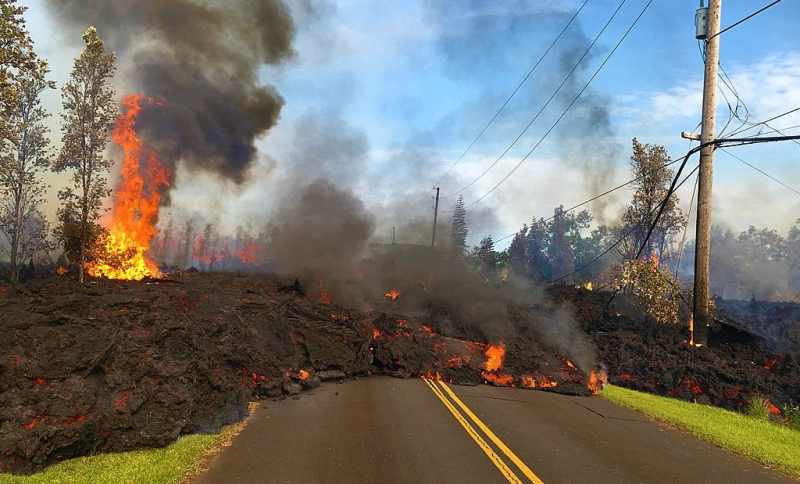 Lava slowly flows from a fissure that opened on a Leilani Estates street on May 5, 2018, after Hawaii's Kilauea volcano erupted. (United States Geological Survey public domain photo via Wikimedia Commons)

It's that last thing that's got folks worried right now. Hawaii's Kilauea volcano erupted Thursday, May 3, accompanied by dozens of earthquakes, the release of dangerous sulfur dioxide and lava flows.

The 6.9 magnitude Kilauea-associated earthquake that shook the Big Island on May 4 was the most powerful on the island since 1975, according to the U.S. Geological Survey.

So far, around 1,700 people and hundreds of animals have evacuated the Leilani Estates area near Hilo. At least nine homes have been destroyed.

The front yard is lava...
Big Island of #Hawaii pic.twitter.com/8w4COYV5WZ

Tax law changes to disaster claims: In prior years, the homeowners could have gotten some tax help for any uninsured losses.

But since the Tax Cuts and Jobs Act took effect this year, only casualty claims that are related to major disasters can be claimed as itemized expenses.

The figures associated with the continuing volcanic destruction notwithstanding, the revised Schedule A line 20 is this week's By the Numbers figure.

That line will still be on the itemized deductions form, but its instructions will be note the new limitation on claims. That's got lots of folks across the country worried.

Now, under the new tax law, if they have any uninsured damages that are from thefts or disasters not severe enough to warrant Uncle Sam's special attention, these folks will have to pay for the repairs and recovery costs totally out of their own pockets.

Kilauea's eruption prompted emergency declarations by Hawaii's Gov. David Ige, as well as by the County of Hawaii's managing director. The Aloha State's National Guard is helping with evacuations.

But unless there is a federal declaration that the volcanic eruption and earthquakes are all the other damage are considered major, those who sustained damages will get no help from the Internal Revenue Code.

Feds watching and waiting: The Federal Emergency Management Agency (FEMA) is, at least based on its website home page, keeping an eye on the situation in Hawaii.

FEMA also has information, which I'm sure every Hawaiian already is very familiar with, on preparing for, dealing with and recovering from a volcanic eruption.

For those of us who've never lived through this type of natural disaster, it's a good — and scary — overview of what our fellow Americans in the South Pacific are coping with right now.

The good news is that the volcanic activity so far has not been deadly. Here's hoping that Mother Earth chills out and Kilauea calms down soon.

And that everyone who's sustained any damage gets all the help, be it tax or otherwise, that they need to get their lives back to normal in America's Paradise.

Alabama storm relief: It could take a while for an official declaration. The Internal Revenue Service announced May 2 that victims of severe storms and tornadoes that began on March 19 in parts of Alabama may qualify for federal tax relief.

The decision comes after the president declared that a major disaster exists in the State of Alabama. Specially, the designation applies to individuals who reside or have a business in Calhoun, Cullman and Etowah counties.

The disaster declaration permits the IRS to postpone certain deadlines for affected taxpayers. In this case, certain deadlines falling on or after the March 19 advent of the Alabama severe storms and twisters now have additional time to file those taxes through July 31.

As the spring thunderstorm season continues to rage and the Atlantic hurricane season lurking, take some time to make sure you're ready for any possible disaster. You can find help in getting ready and recovering from natural disasters at the ol' blog's Storm Warnings page.