Every bettor in the United States after today's Supreme Court ruling that opens up sports betting nationwide. (Source: Giphy.com)

That whoop you heard this morning was celebrating sports fans all across American who like to drop a few (or more) bucks on their favorites sports match-ups.

The possibility that they can do so closer to home now an option thanks to today's (May 14, 2018) Supreme Court decision.

Place your bets: The nation's highest court ruled 7-2 that a federal law that has effectively limited sports betting to Nevada for more than a quarter century is unconstitutional.

The case, brought by New Jersey and supported by almost two dozen other states, means that they and other jurisdictions are now free to legalize betting within their borders on college and professional sports.

Immediately after the Supreme Court issued its ruling, Boston-based DraftKings announced it will be getting into the lucrative business as soon as possible. The fantasy sports game giant said it already is working with state regulatory officials to apply for operating licenses in those states that have already passed legislation authorizing sports betting.

But just how big that market will be and how soon it will spread depend on a lot of things.

The obvious reason states want legal gambling is that it gives them the chance to regulate and tax betting parlors and collect additional taxes on payouts that now escape their treasuries because they're handled through underground, illegal operations.

The revenue rewards, however, might not be as big as they hope.

Short term gambling tax revenue: While new gambling activities may generate short-run increases in public revenues, the increases tend to get smaller and their duration shorter, perhaps as more and more states compete for a limited pool of gambling dollars, according to the 2016 Blinken Report issued by the Rockefeller Institute of Government.

Still, the possibility of any added dollars will temp many states, still struggling to recover from the recession, to take a head-long leap into the legal sports betting pool.

Others, like my native Texas, probably will continue to ban gambling operations. Or, as Cory Crow noted on Twitter, mess up the opportunity somehow. 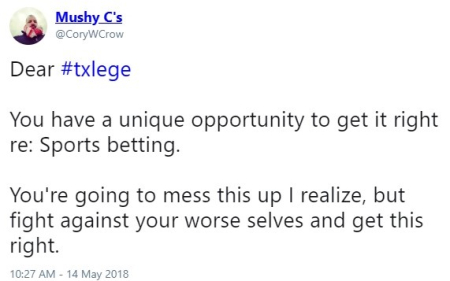 I agree with Crow. The staunchly conservative Texas Legislature will mess this up, basically by maintaining its no-bets stance.

While the Blinken data indicates the gambling revenue is not a panacea, the Lone Star State needs to at least get on the same playing field as most of its neighbors. Currently, the state treasury already loses millions of dollars every year thanks to Texans who cross into neighboring Louisiana, Oklahoma and New Mexico to bet in casinos there.

As the AP map indicates, The Pelican and Sooner States also will likely legalize sports betting, enticing even more sports-crazed Texans and their money to their states.

Feds could again intervene: Then there's the matter of whether the U.S. House and Senate will again insert Uncle Sam into the sports betting issue like it did in 1992.

"The question now is whether Congress will leave the states to make their own choices or will now try to enact some kind of federal regulation of sports betting," said Steve Vladeck, CNN Supreme Court analyst and professor of law at the University of Texas School of Law.

Today, though, gamblers and the groups that have supported the end of PAPSA are celebrating.

"Today's decision is a victory for the millions of Americans who seek to bet on sports in a safe and regulated manner," said Geoff Freeman, president of the American Gaming Association (AGA) in a statement issued by the industry group.

Most want wider legal betting: The AGA cited a pre-Supreme Court ruling survey conducted by the Washington Post that found 55 percent of Americans believe the federal ban on sports betting should be ended. Other polls have found similar support for ending the ban on sports betting.

(Source: SportsBettingInAmerica.com and the AGA)

On the industry side, the argument for nationwide legal sports gambling tends to emphasize that state-regulated gaming should help reduce the amount of illegal bets. Despite, or maybe more accurately because of, PASPA's existence, the AGA estimates at least $150 billion a year is gambled on sports in the U.S., with 97 percent of that amount bet illegally.

Taxes due on winning bets: Of course you knew we'd get here eventually. Regardless of whether your bet is made legally or illegally, you owe tax, at least at the federal level, on your winnings.

So keep an eye on your state's actions to legalize (or not) gambling.

And also keep track of your bets, both those that pay off and where you're not so lucky. As noted in an earlier post on the lucky Texas woman whose Kentucky Derby bet paid off handsomely, the new tax law retains taxpayers' ability to offset gambling expenses, including those losing bets, as a Schedule A itemized deduction.

Good for business but bad for the youths. This is not good for the future of our youths. Their mental energy has to be targeted to something meaningful and creative.