Good news for states that want to tax marijuana: Most Americans approve of pot Substantially more than half of Americans say recreational marijuana use should be legalized.

The October 2017 Pew Research Center survey that found the pro-marijuana majority is the latest analysis that documents a steady increase in weed acceptance over the past decade.

The currently slow-but-steady support for weed — the 61 percent approval in the latest survey is up just 4 percentage points from a 2016 poll, but it's nearly double the 31 percent pro-pot results recorded in 2000 — offers hope to the marijuana industry.

Part of that pro-pot progress is the herb's prospects as a job creator and revenue source.

Marijuana taxes not large, but offer some state cash: Moody's Investors Service today (May 8, 2018) said that tax revenue from recreational marijuana makes up only a small percentage of annual general fund revenues.

But in states with well-established retail weed industries — notably Colorado and Washington, the first two to legalize recreational marijuana — tax revenues can quickly ramp up in the years after legalization. 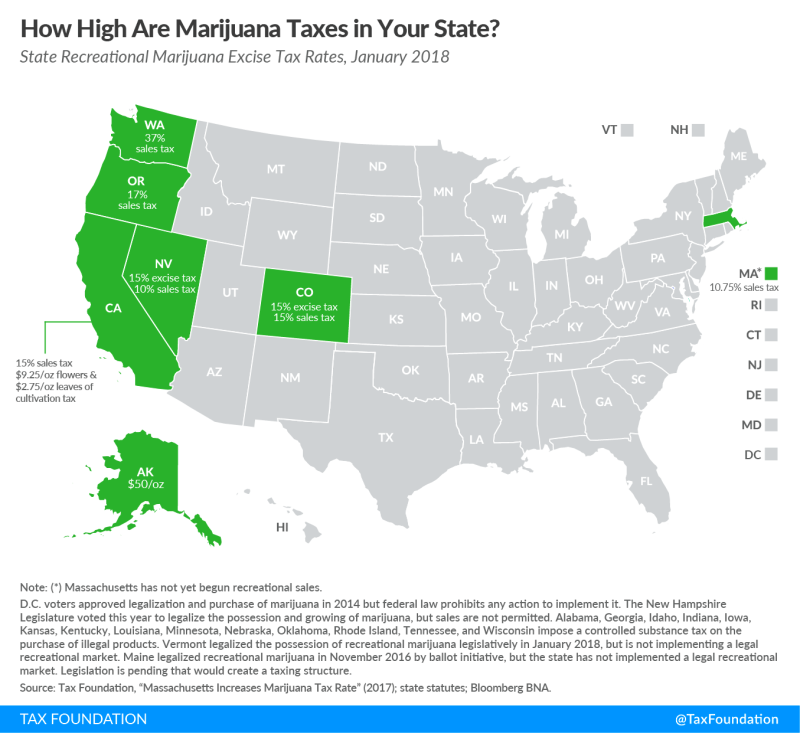 The Tax Foundation map above shows how states that have legalized recreational use of marijuana tax it. Click the map for more details on the various taxes applied to pot across the country.

And while Moody's notes that the pot payout for Colorado and Washington will be just 2 percent or less of those two states' total general fund revenues, many cash-strapped states across the country likely will see pot's potential, even if it is limited. After all, any added income is welcome, especially when state lawmakers can get it without raising voters' taxes.

Things also are predicted to pick up for the legal U.S. weed market in a few year. Euromonitor International estimates the sector will reach $16 billion by 2020, up from $5.4 billion in 2015.

More from medical marijuana: Marijuana's revenue prospects could be more promising in connection with its medical use.

While just nine states (Alaska, California, Colorado, Maine, Massachusetts, Nevada, Oregon, Vermont, and Washington) and the District of Columbia have legalized pot for recreational purposes, 29 states (plus D.C., Guam and Puerto Rico) say it's OK for marijuana or its active ingredient to be used for medical purposes.

At least a third of those jurisdictions levy some sort of tax on medical marijuana.

The main reason for the no-tax push is the financial burden on patients who typically pay the full cost of such treatments since medical marijuana is not covered by insurance.

Plus, there's the fairness factor. State sales taxes generally do not apply to prescription medications, but that Rx exemption doesn't apply to marijuana since it cannot be prescribed under federal law. (More on the feds later.)

Patients aren't the only ones who directly pay.

Those fees are a big reason why states are loathe to eliminate medical marijuana levies.

Income tax from pot workers: Another tax avenue also is available via medical marijuana, the income tax from folks who work in the field. Some workforce estimates say 630,000 jobs nationwide will be created in the industry by 2025.

Ohio, which will join the medicinal weed ranks in September, is taking steps before any dispensaries open to ensure the operations will have competent workers.

The Cleveland School of Cannabis is a for-profit school that for the last year has been working to prepare people for a legitimate marijuana career. It isn't nationally accredited, but it did receive a license from the Ohio Board of Career Colleges and Schools.

The school was started by Austin Briggs, a Cleveland Heights native who spent several years working in California's marijuana industry. There he saw one of the biggest problems the Golden State's medical marijuana sector faced: not enough trained workers.

The Cleveland School of Cannabis offers three certificate programs, in horticulture, business and medical applications, as well as executive program that combines all three. Briggs recently explained to public radio station WKSU that the school is taking the basic plant biology and management techniques taught at institutions across the country and applying them to the marijuana industry.

Federal fight: The biggest obstacle, though, for Ohio and other states where medical or recreational pot is legal is Uncle Sam.

I'm not just talking about the inability of Cleveland students to claim federal educational tax breaks for their cannabis courses. They don't meet one of the main requirements, that the school be a Department of Education accredited institution.

I'm talking about the fact that under federal law, marijuana is still illegal.

While the previous Obama Administration backed off enforcement marijuana laws in states where voters have approved various types of pot legalization, that's no longer the case. Trump Administration Attorney General Jeff Sessions made it clear earlier this year that the Justice Department now is seriously considering increased enforcement activities in jurisdictions that have legalized the drug.

Since that announcement, the DoJ has taken a (smoke-free) breath. In March, the leader of the nation's law enforcement arm indicated that the Justice Department won't waste its time or resources on "small" or "routine" marijuana cases. Instead, it reportedly will focus on bigger marijuana figures, like drug cartels, larger drug rings and conspiracies.

Still the threat of arrest remains.

That might eventually change, though, as the United States continues to slow walk toward even wider national approval of marijuana.

And as states continue to see legal and taxed weed as a way to add at least some money to their treasuries.

Good news for the states, Cannabis weeds use by Alternative medicine

Thanks. Informative blog for visitors. Presently legally and it clinically improves cannabis used as Alternative medicine. We are giving online weed delivery service, featuring recreation grade cannabis, dispensary cannabis, edibles and concentrates delivered to you in the Berkeley and north Oakland Area. Visit for more information......

Happy to know that. Legalizing Marijuana is right thing to do.