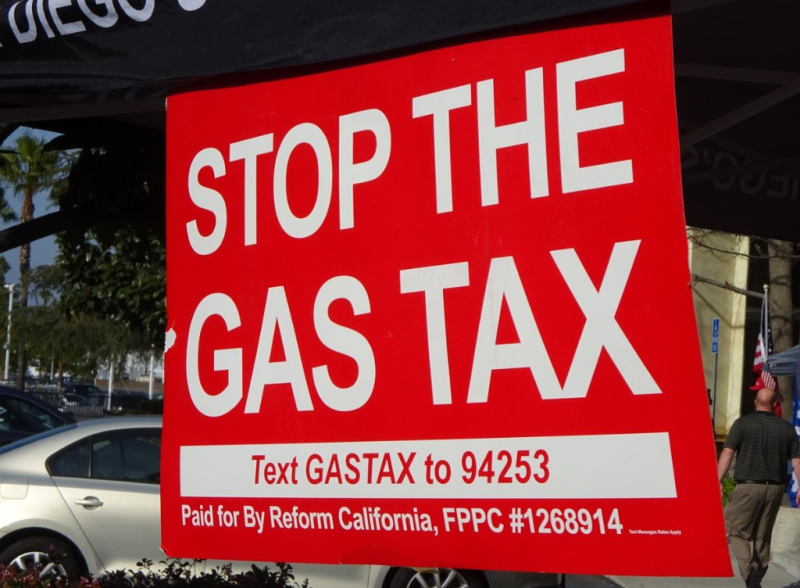 California has the highest gas tax in the United States. Opponents are hoping to repeal it via a ballot measure this November.

I filled up my mid-sized Chevy sedan's tank this morning, something I do every two weeks or so. I was stunned to see my local gas station, which usually sells gas at the lower end of the prevailing price scale, had regular unleaded going for $2.63 a gallon.

That's a more than 50-cent hike from my previous tank top-off in April. It also put the Austin area (or at least my neighborhood) closer than it's been for a while to the national gas price average, which AAA data shows is, as of today, May 20, just more than $2.92.

AAA numbers show the national gas price average has been hanging in the more-than-50-cent range for the last couple of weeks. In fact, as the AAA graphic below shows, the price of gasoline this year has stayed higher than its been in the past four years.

And things could soon get worse. 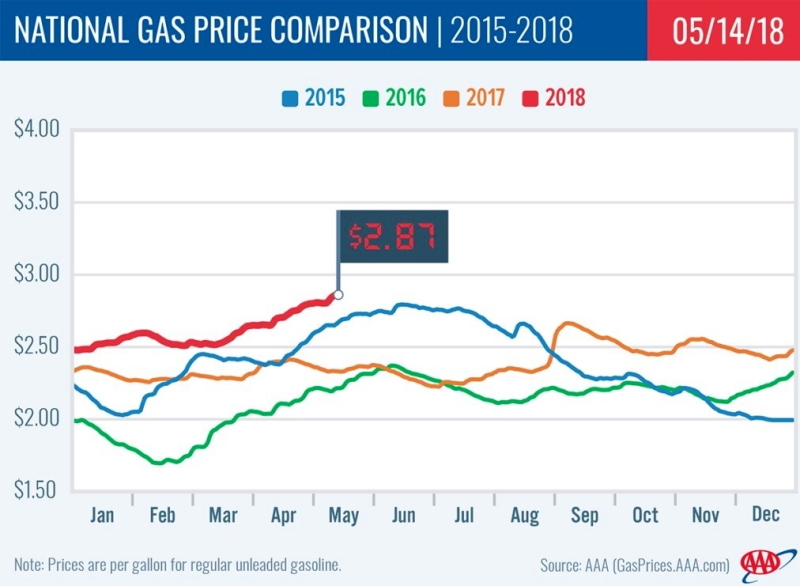 Gas taxes can add to pump woes: The highway travel industry group also notes that California, with an average price last week of $3.71 a gallon for regular, had the highest gas prices in the country.

As a driver who makes a regular 100-mile roundtrip excursion to visit my elderly mom, I feel for Golden State residents who are unhappy with the price they pay at the pump.

And I also can see how many Californians are irked at how their state's recent gas excise tax hike added to the price they pay when they refuel their vehicles.

California's fuel levy, which took effect on Nov. 1, 2017, increases the regular-gas state tax by 12 cents a gallon, to nearly 42 cents a gallon. The law also imposes an annual fee, ranging from $25 to $200, on vehicles depending upon their value.

California's 41.7 cents total gas tax is this week's By the Numbers honoree.

Rising pump prices, anger: The gas tax was touted as the only way to raise money needed to fix the California's roads, bridges and other infrastructure.

Like similar transportation related public projects across the country, California's infrastructure is not in the best of shape.

But as temperatures have risen alongside gasoline prices with the arrival of the summer driving season, the effort to repeal California's gas tax has hit a higher gear.

There's a move to deal with it in a time-honored California way: via a ballot measure.

Political potential, too: The national Republican Party is pouring money into the campaign, which it sees as a way to rally Republican voters who typically have an overall anti-tax bias.

If more GOP-leaning Californians go to the polls in November to vote on the gas tax question, they also might cast ballots for conservative candidates and hold off what many Republicans fear could lead to a Democratic take-over of the U.S. House.

House Majority Leader Kevin McCarthy and many of his colleagues are buying that argument. Collectively, they have contributed $2.19 million to groups like Give Voters a Voice and Reject the Gas Tax.

It could pay off as the GOP hopes. Or it could be a costly failed bet.

A Public Policy Institute of California poll released in February found essentially an even split on the repeal effort, with 47 percent of likely California voters supporting repeal and 48 percent in opposition.