Home Table of Contents Tax Tips Credits Deductions Refunds State Taxes Politics/Laws Tax Terms Archives
Cardi B speaks, colorfully, for all of us about taxes
Make the most of your 2017 itemized deductions,
many of which change or disappear in 2018

Most U.S. taxpayers get refunds. But the time it takes to get that over-withheld money seems to get longer every filing season, at least according to the emails I've received and comments on my refund-related blog posts.

Part of the reason is the annual mandated hold until mid-February of refunds associated with returns that included Earned Income Tax Credit (EITC) or Additional Child Tax Credit claims. Realistically, that money doesn't show up in many affected filers' hands until the end of February.

Then earlier this year, Congress decided to renew some tax breaks after the filing season had already been underway for weeks.

The Internal Revenue Service last Friday, April 6, let tax pros know that it had finally updated its computer systems and is now processing all the returns claiming these tax breaks that were retroactively restored on Feb. 9.

All this late tax legislation and already expected refund delays mean that some folks who've been waiting on their refund money have been scraping by.

Or they turned to refund advance financial products to help with their personal cash flow.

While that probably seems like a good, or perhaps only, move for many, it likely will cost them.

Refund loans, still popular and costly: There has been a dramatic growth in volume of a new generation of refund anticipation loans (RALs), according to the recently released 2018 annual report on these products by the National Consumer Law Center (NCLC) and Consumer Federation of America (CFA).

Almost 2 million RALs were issued in 2017, according to "Tax Time Products 2018: New Generation of Tax-Time Loans Surges in Popularity."

The related refund anticipation check (RAC) also was popular, notes the report, with around 20.5 million consumers getting these pre-refund checks, at a cost of at least half a billion dollars, in 2017.

The RALs issued nowadays are different from the high-cost loans that were driven off the market in the early 2000s, note NCLC and CFA consumer advocates who compiled the report. Today's advances are advertised as being fee-free to taxpayers,

But there's an insidious new twist.

Some tax preparers are actually imposing other fees to make up for the lack of a direct cost for the RAL, in effect charging a disguised fee, according to the report.

Preparation fees tack on RAL costs: The greatest expense for a supposedly no-fee RAL could actually be the tax preparation fee, according to the 2018 report. 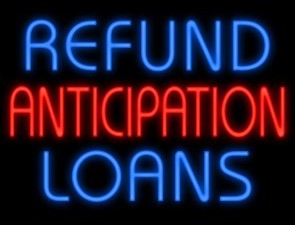 In order to access a RAL, the taxpayer is required to use the services of a paid preparer. If that's the tax preparation route a taxpayer had planned all along, that's fine.

But it means that taxpayers who want a RAL cannot use a free filing service or prepare their 1040s themselves.

Tax preparation fees can run into the hundreds of dollars, a considerable additional expense for many filers who simply are looking for ways to get their refunds more quickly.

And some paid tax preparers add more client charges when RALs are part of the service.

The NCLC/CFA 2018 study found that lender who do offer RALs charge tax preparers who facilitate them a fee of $35 to $45 for each refund-based loan.

Preparers might pass along these fees, or charge even more, by increasing their tax preparation fees or by charging separate add-on junk fees.

Several of the lenders for these second generation RALs told the consumer groups that they prohibit preparers from charging higher tax preparation fees to RAL customers.

However, the NCLC/CFA report says that hidden fees can be hard to avoid "given that tax preparation fees are so opaque and few consumers can get firm price estimates before their returns are prepared."

RACs instead of RALs: think you can get refund money early and escape the fess by using another tax advance product? Consumer advocates say think again.

As RALs came under attack, the tax preparation and lending industries adapted, creating the refund anticipation check, known by the acronym RAC or as a refund transfer.

A RAC generally is no faster than the direct deposit of a refund to the taxpayer's own bank account. However, many taxpayers find the checks appealing because they can have their tax preparation fees deducted from their refunds rather than paying the preparation costs separately.

RAC added costs, too: About 21.4 million taxpayers obtained RACs in 2016 and 20.5 million did so in 2017, according to the latest IRS data cited in the consumer report.

Since the fee for a RAC is at least $25, these taxpayers collectively paid a minimum of $500 million for these financial products to get seemingly early access to their refunds.

This year, per the report, RACs generally cost $29 to $65 for a federal refund, plus another $10 in some cases for a RAC related to the filer's state tax refund.

And as with RALs, many tax preparers charge add-on fees, such as document processing or e-filing fees, in connection with RACs and other tax-time products, adding significantly to the cost of these advance tax checks.

The price of tax impatience: As I admitted in a post several years ago, folks sometimes have valid reasons for turning to tax refund cash advances.

That point also was made by the consumer advocates when they released their 2018 report.

The users of refund advance products typically are low- and moderate-income workers for whom cash flow is important, said Chi Chi Wu, staff attorney at NCLC and coauthor of the consumer groups' report. "The fact that Congress has delayed refunds for some of the neediest taxpayers makes the situation all that much worse."

Wu and her report coauthor Michael Best, senior policy advocate at the CFA, told Tax Analysts/Tax Notes that changes to the Congressionally mandated delay on refunds associated with EITC and child tax credit claims not likely.

But to address the challenges that such slowed refunds pose to cash-strapped filers, the pair suggests in the report that a standardized disclosure of paid tax preparer fees would help consumers know what they will get for their tax-help dollars.

Such uniform fee disclosures, argue the consumer groups, also would provide a mechanism by which taxpayers could comparison shop for services, as well as show what taxpayers would actually pay for RAL and RAC products.

All individual filers' circumstances, even when tax situations seem identical, are unique. Those variables mean that different clients will be charged different amounts.

That's true and all well and good for the reputable tax pros that I know.

But there definitely is a problem when taxpayers don't do their due diligence or decide to go with what appears to be the cheapest professional tax help they can find. Or one making outlandish tax refund promises.

Sorting out refund issues: So what's the answer? That's a good, and difficult, question.

The complexities that all involved, from the tax industry to financial institutions to taxpayers themselves, must sort through each tax season mean there is no easy solution.

But kudos to NCLA and CFA for continuing to point out abuses, both actual and potential, that taxpayers face with regard to refund advance products. Recognizing a problem is the first critical step to resolving it.

Thanks, too, to the vast majority of tax professionals who do their best to provide solid and fairly-priced help to filers.

The bottom line as I see it comes down to taxpayers.

If you need paid tax preparation help, find a qualified and reputable tax pro, not just an inexpensive preparer making all sorts of impossible tax guarantees.

If you can't afford a private sector tax pro, take advantage of the trained and Internal Revenue Service certified volunteers at Volunteer Income Tax Assistance (VITA) and AARP Tax-Aide/Tax Counseling for the Elderly (TCE) sites across the country.

Finally, don't depend on your possibly delayed refund. Adjust your payroll withholding, especially now with the new tax law changes in place, so that you get your tax money throughout the year.

Yes, it will require you have some self-control and not spend the extra pay. But that's better than waiting and waiting or paying more months later to get access to your tax cash.