Home Table of Contents Tax Tips Credits Deductions Refunds State Taxes Politics/Laws Tax Terms Archives
Make the most of your 2017 itemized deductions,
many of which change or disappear in 2018
10 tax tasks to take care of by April 17

Federal, and most state, tax returns are due in less than a week. Don't panic! You still have time to finish your return (or get an extension).

But don't be in such a rush that you make a costly mistake.

Yes, errors on 1040s still happen, even though most of use tax preparation software that catches errors on our annual returns.

Here are a dozen common tax mistakes that millions of taxpayers make every year. Some are directly from the Internal Revenue Service. Others are based on my and other filers' experiences.

There's been some talk about changing that for tax filing, but until that happens, you've got to include it on your annual return. The IRS won't process a 1040 without it. This identity number requirement extends to you as the primary filer, as well as the Social Security numbers for your spouse and any dependents.

These numerals are crucial because so many tax-related transactions, from income statements to investment earnings to retirement plan contributions and distributions, are keyed to this number.

A Social Security number also is critical when claiming several tax credits, such as the child tax and additional child tax credits, as well as ones for educational expenses and dependent care costs.

At best, a missing Social Security number will slow down the processing of your return. At worst, it could cost you a valuable tax breaks. So be sure to enter on your 1040 each person's number exactly as it's printed on the Social Security card.

2. Misspelled or different names: Sure, the bulk of the information on your tax return is numerical, but words — specifically names — are important, too. Spell all names listed on a tax return exactly as listed on the taxpayers’ Social Security card.

What's the big deal if you've gone by a middle or nickname all your life and enter that on your Form 1040? Plenty. When the names of a taxpayer, his or her spouse or their children don't match the tax identification number that the Social Security Administration has on record, the IRS processing machine likely will kick out or slow down the tax return.

Name issues often are a problem for the newly married. Many folks still change their surnames when they marry, whether the "I do's" are exchanged by a bride and groom or spouses in same-sex marriages, which the IRS now recognizes.

In these cases, if you didn't alert the Social Security Administration (SSA) of your name change after your wedding, your new name on your 1040 or other tax statements could cause a problem when you file your first joint tax return. Get in touch with the SSA ASAP to reconcile this.

3. Improperly claiming a dependent: Sometimes determining just who is your tax dependent can be messy. There are lots of rules about relationships and support earned or provided and who lives for how long in your house. You also must have the Social Security number of the person (see #1), either a child or qualifying relative, you're listing as a dependent on your 1040 or 1040A.

Sometimes the confusion leads to an innocent mistake as to who is eligible to be listed as your tax dependent. Other times, though, folks knowing claim a person as dependent to get the added exemption amount or to claim the refundable Earned Income Tax Credit.

Faking dependents is not a good idea. This is willful disregard of the tax laws and your responsibility to meet them. Such intentional tax violations could lead to tough penalties, sometimes of the criminal nature, on top of the unpaid tax and interest added to it that you thought you were escaping with your fake dependent ploy.

Think the IRS might be too busy to catch your suddenly larger family? Think again. The IRS knows that filers sometimes add people, either real or imaginary or even pets, on their returns. That's why tax examiners look at who has and hasn't been listed before on your returns.

4. Using the wrong filing status: Some taxpayers unintentionally claim the wrong filing status. That innocent error could be costly, such as choosing single in the first tax-filing season since your divorce when you have primary custody of your children and really should be filing as the more tax-beneficial head of household.

Filers have five filing status options, and each could make a difference in your ultimate tax bill. Advice from the IRS in Form 1040 instructions.

And yes, even the IRS says you can round your dollars and cents on your Form 1040.

But when it comes to deductions and business expenses, it tends to make the IRS think that you're, uh, making up amounts.

OK, I tend to add tip amounts so that meal checks come out to even numbers. But I have those receipts. Other financial transactions, however, rarely end in .00.

6. Entering incorrect bank account numbers: You can have your tax refund directly depositing into a bank account or accounts or retirement plan. That's easy for you and the IRS. Unless you enter the wrong account number and accompanying routing number.

The more numbers you enter on a tax form, the more chances you have to enter them incorrectly. And a wrong account or routing number could cause you to lose your refund entirely.

You can divide your refund deposit into three accounts by filing Form 8888 along with your individual return. It's not a difficult document to complete, but if you put in wrong account numbers, your refund could end up in someone else's account or be sent back to the IRS.

Incorrect account numbers aren't just a problem when a refund is split multiple ways. Even if your refund is going to just one account, make very sure you enter that account and bank routing numbers correctly.

7. Overlooking additional income: Did you have a side job this year? If so, as a contractor you probably received a Form 1099-MISC detailing the extra earnings.

What about savings and investment accounts? For these, you should have received Form 1099-INT and Form 1099 DIV statements.

In these 1099 situations, the IRS knows precisely how much extra money, either as wages or unearned investment income, you made because it got copies of those forms, too.

If you forget to include any of these earnings on your return, IRS examiners will let you know you that it knows and that you owe taxes on that money, too. And depending on when your oversight is discovered, you also could owe penalties and interest on the unreported earnings.

8. Missing charitable contributions: You were very generous last year and you're taking tax advantage of your philanthropic nature this filing season. Good for you in both cases. But make sure you don't overlook any charitable donations.

All types of donations, from cash to cars, could be valuable tax deductions, so make sure you count them all when you file.

In addition to these cash and property donations, you also may deduct mileage, parking fees, postage and long-distance phone calls made while performing charitable work.

9. Not signing your tax return: A tax return that's unsigned gets the same treatment as ones missing Social Security numbers. A return lacking a signature — or signatures: when married couples file a joint return, both spouses must sign the 1040 — isn't valid and the IRS won't process it.

The easiest way to avoid this oversight is to file electronically and digitally sign it before sending it to the IRS. Your tax software, either the package you bought or the one you're using on Free File, will walk you through the e-signature process.

If, however, you're still mailing your return, don't be in such a hurry to be done with the job that you stuff your 1040 in the envelope sans signature.

10. Making credit or deduction mistakes: Here's a non-news flash. The tax code is complicated (and will stay that way despite the tweaks to the Internal Revenue Code made by the Tax Cuts and Jobs Act). That means there are lots of opportunities to make mistakes as you look for tax-saving credits and deductions.

Errors are frequently made by folks claiming the Earned Income Tax Credit (EITC) and additional child tax credit. That's part of the reason the IRS now must hold refunds related to these tax breaks until mid-February.

Follow the tax filing instructions carefully, either those in IRS publications and forms or as part of your tax software. The IRS' online Interactive Tax Assistant also can help you determine if you're eligible for certain tax credits or deductions.

11. Math miscalculations: The IRS is all about the numbers. So it's no surprise that the most common error on tax returns, year after year, is bad math.

Arithmetic errors range from simple addition and subtraction to more complex tax items, like those credits and deductions just mentioned in mistake #10. Figuring things like the EITC or the taxable portion of a retirement account distribution, for example, is more difficult and results in more math errors.

In processing 2016 tax returns, the IRS caught more than 2.5 million math errors, according to the agency's 2017 Data Book. Considering that most of us use tax software, in large part because it does the math for us, that's astounding. 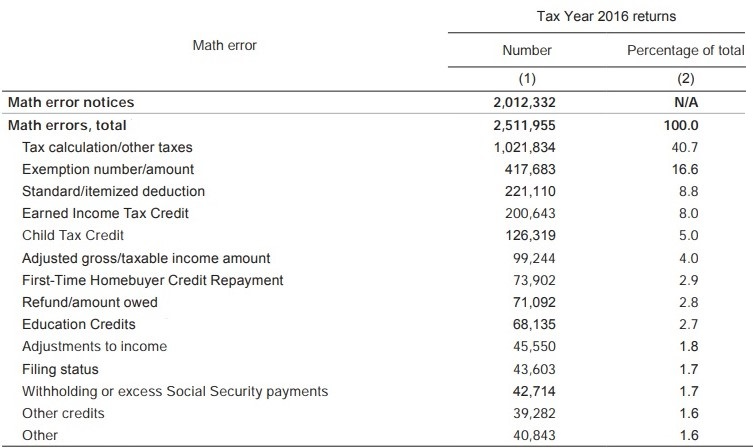 Of course, the adage garbage in/garbage out applies here. The wrong number on one form's line produces a wrong calculation that gets transferred to another form, exponentially compounding the math error.

So pay close attention when you enter your numerical data into your tax return.

Millions of taxpayers put off filing until the very last minute. That's OK as long as your mailed paper return is postmarked by the April filing deadline or you hit "enter" to e-file your 1040 by midnight of the deadline day.

The good news for 2017 taxes is that the April 15 due date is pushed to April 17 because of the weekend and the federal Emancipation Day holiday in Washington, D.C. But if even with a couple of extra days you still just can't finish your forms by the deadline, get an extension.

Filing Form 4868 will give you six more months, until Oct. 15, to get all your forms filled out and into the IRS. You can do so by either mailing a paper form or electronically, again by next Tuesday's due date.

Just remember that an extension to file applies only to the forms. You still must send by April 17 any tax you owe with your extension request. If you don't, you could face late-filing or non-filing penalties.

Nobody wants to pay Uncle Sam a penny more than necessary, so don't make the mistake of missing the filing deadline.

OK. That's my, to borrow an IRS term, Dirty Dozen tax filing errors. Don't make them this year. And if you have others on your own tax errors list, please share them in the comments below.

Everybody please print this article and keep it on your table so you can read it again before you file your tax return.