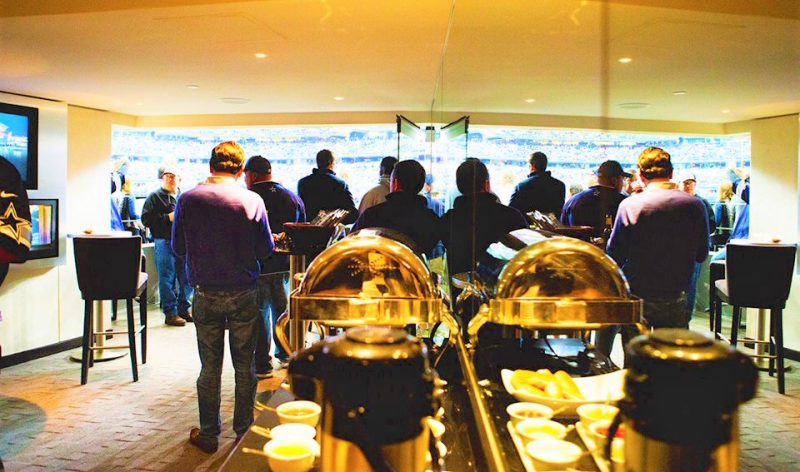 Luxury suites provide fans with more than just views of sporting events. Some companies use these special accommodations to woo or reward high-dollar customers. However, a new tax law limiting the deductibility of such entertainment could end or limit these and similar business expenditures. (AT&T Stadium luxury box photo courtesy SuiteHop via Facebook)

The arenas where the NCAA's March Madness college basketball games are being played have luxury box seats where the seat owners used to entertain existing and potential high-dollar clients.

I say "used to" because the Tax Cuts and Jobs Act (TCJA) that took effect this year could, in some cases, mean the end of such box seats.

Why? Because, notes Associated Press reporter Marcy Gordon, the hundreds of millions of dollars heretofore spent annually on entertaining customers and clients at sporting events is no longer tax deductible.

Gordon's article exploring the consequences of the loss of the entertainment deduction earns this week's Saturday Shout Out.

Yes, careful readers, you're right. I am on a weekend sports shout out binge, what with last week's look at how the tax law changes could discourage major league sports team trades. That's how I spend my time off from taxes!

Chopping business tax deductions: But back to taxes for just a moment.

Up until Dec. 31, 2017, U.S. businesses could deduct 50 percent of entertainment expenses.

The TCJA, the first substantial revisions to the Internal Revenue Code in 30 years, now says no to this deduction.

The meal write-off component, however, will remain 50 percent deductible as long as the eats are clearly separate from the entertainment and aren't lavish or extravagant.

The change was, of course, to free up some money for other tax breaks in the TCJA. The Joint Committee on Taxation estimates that ending the business entertainment deduction will save the government about $2 billion a year and $23 billion through 2027.

All, not just big, businesses affected: Arena and other sporting venue owners, along with the folks who pay for the expensive box seats at those locations, naturally are freaking out about the tax deduction change.

But it's not just big businesses that will feel the impact. The overall tax deduction change will be felt by all companies, regardless of size and client entertainment budgets.

No more tax-advantaged treating of clients or prospects to any ball game, even in much less luxe surroundings.

No more golf outings subsidized in part by Uncle Sam in order to seal a sale.

No more tax-code help for an evening at the local theater with that client who loves Broadway musicals.

You can, of course, keep doing such things to make sure you keep your clients happy and bring in new ones.

But now you'll have to more carefully weigh whether the full entertainment cost of wooing or keeping the business is worth the amount of profit that the client will provide your company.

You have described it sensibly, such things should be checked much faster so that there are no such problems, unless someone just waited for it.