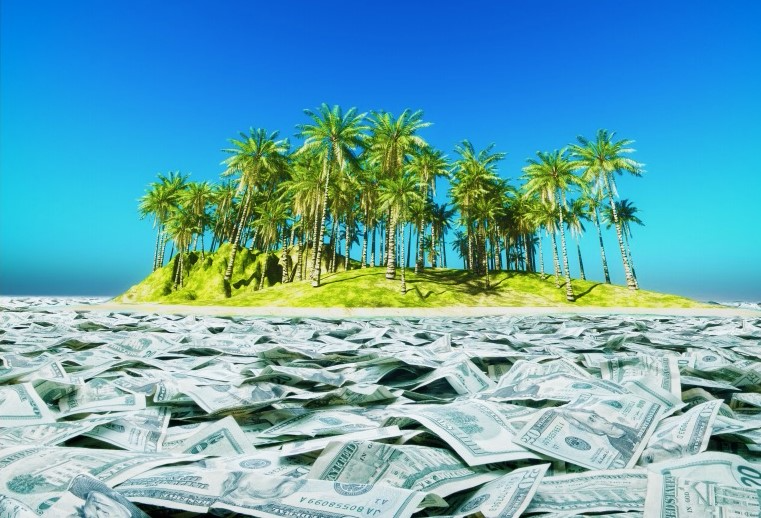 The phrase immediate conjures up images of dubious financial guys who've traded in their high-powered jobs and three-piece suits for floral print shirts and umbrella-shaded drinks on a tropical beach, all funded by cash they stashed in island-based accounts, hidden from the U.S. tax collector.

Everyone knows by now of the scrutiny given to Cayman Island banks, as well as the hidden accounts revealed by the Panama Papers.

Again, everyone by now knows about the fabled secret Swiss bank accounts and similar ones in neighboring Lichtenstein and a tiny island in the Irish Sea.

The IRS certainly knows about all these places where U.S. taxpayers stash their cash. And they do all they can to find the money and get the taxes due.

In addition to employing traditional enforcement actions against offshore accounts, the IRS has used since 2009 a voluntary program — often referred to, much to the IRS' chagrin, as a tax amnesty — to encourage foreign account owners to report their offshore holdings and get right with the tax collector.

That option, however, will end in September.

Foreign holdings, U.S. taxes: One method the IRS uses to find and collect taxes on foreign accounts is the Foreign Bank and Financial Accounts reporting, commonly referred to as FBAR.

You must file this report (Form 114 submitted to the Financial Crimes Enforcement Network, or FinCEN) if you are, per IRS/Banking Secrecy Act language, a "United States person [who] had a financial interest in or signature authority over at least one financial account located outside of the United States" and at any time during the tax year the aggregate value of the account or accounts exceeded $10,000.

If you don't comply with these laws, you'll face very costly penalties and potential criminal prosecution.

Whatever the reason for noncompliance regarding overseas accounts, the IRS decided in 2009 to add a tax carrot to its foreign account enforcement sticks.

The agency created the Offshore Voluntary Disclosure Program, or OVDP, to encourage people to 'fess up about their offshore accounts and pay Uncle Sam the taxes due on that money.

That first OVDP was tweaked and extended over the years. The current offshore account reporting program was put in place in 2014.

Although the IRS hates the word amnesty, it works much the way of state-level tax forgiveness programs. Basically, a person who has a heretofore unknown to the IRS foreign account(s) can tell the taxman about the money, pay due taxes (and interest) at a reduced penalty rate and avoid criminal charges.

Self-reporting success: Over the years, the various OVDP versions have been remarkably successful.

Since the OVDP's initial launch almost a decade ago, the IRS says more than 56,000 taxpayers have used one of the programs to comply voluntarily. All told, these foreign account owners have paid a total of $11.1 billion in back taxes, interest and penalties.

But after peaking in 2011, when around 18,000 taxpayers came forward about their overseas account ownership, the number of self-reporters has steadily declined. In 2017, there were only 600 disclosures via the OVDP.

So, says the IRS, it's time to end the program.

The IRS announced this week that it will be ramping down the current OVDP over the next few months, with closure of the program scheduled for Sept. 28.

This advance alert of the coming closure, says the IRS, should give any U.S. taxpayers with undisclosed foreign financial assets plenty of time to take advantage of the OVDP before it closes.

"Taxpayers have had several years to come into compliance with U.S. tax laws under this program," said Acting IRS Commissioner David Kautter. "All along, we have been clear that we would close the program at the appropriate time, and we have reached that point. Those who still wish to come forward have time to do so."

Other compliance options remains: The IRS also operations a separate program, the Streamlined Filing Compliance Procedures, for taxpayers who might not have been aware of their filing obligations.

This program has helped about 65,000 additional taxpayers come into compliance, according to the IRS.

The streamlined system will remain in place. For now.

The IRS says it will continue to monitor this program's effectiveness and, as with OVDP, it may end the streamlined filing procedures at some point.

And don't think that the end of the OVDP and possible similar phase out of the streamlined procedures mean that folks can go back to their former, secretive tax-hiding account ways.

The IRS has other tools to combat offshore tax avoidance and it reminds taxpayers that it will continue to use them. They include continuing taxpayer education (like this blog post you're reading), leads from whistleblowers (that sometimes pay off very nicely), civil examination (aka audits) of returns and criminal prosecutions in cases where flagrant offshore tax evasion is discovered.

"The IRS remains actively engaged in ferreting out the identities of those with undisclosed foreign accounts with the use of information resources and increased data analytics," said CI chief Don Fort. "Stopping offshore tax noncompliance remains a top priority of the IRS."

The IRS has more details on options available for U.S. taxpayers with undisclosed foreign financial assets.

You've been warned. Now take advantage of the OVDP while you still can.