SCOTUS' online sales tax ruling might not be the final word

Internet shopping is now the preferred purchasing method for millions. Just ask Toys R Us, which has blamed its decision to shutter its operations largely on losses to remote sellers.

But the taxation of products bought online is still a mish-mash of state laws.

That could change in a few months depending on what the Supreme Court of the United States (SCOTUS) decides in a high-profile remote sales tax case. 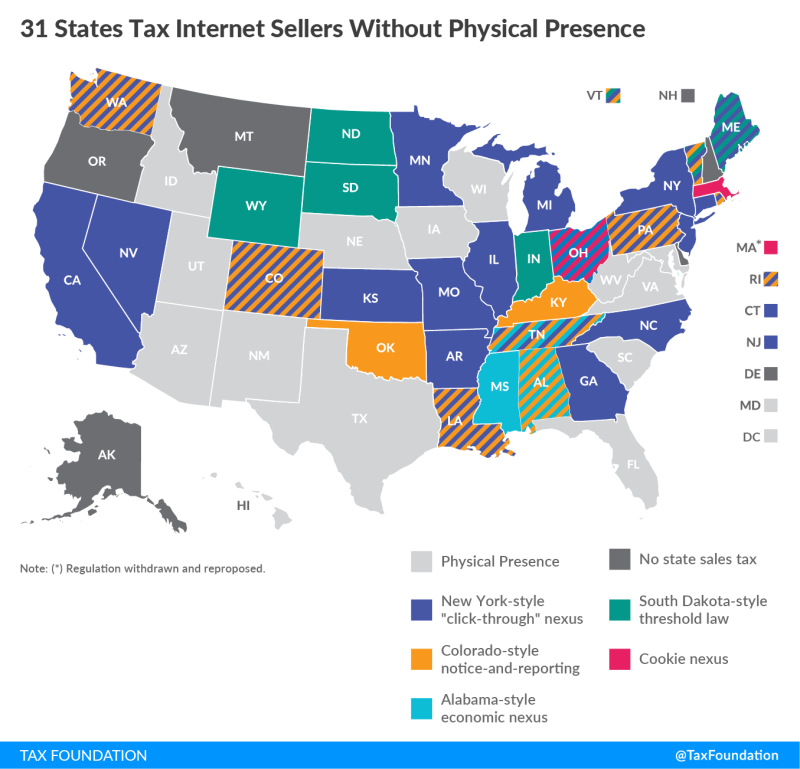 The oral arguments in the case, South Dakota vs. Wayfair, are set for April 17, which just happens to be this year's federal tax return filing deadline. SCOTUS' decision is likely to be announced in late June.

Many states could be affected: As the Tax Foundation map above shows, 13 states still rely on the current physical presence rule set out in the Supreme Court's 1992 North Dakota vs. Quill decision.

The Quill ruling said only sellers actually located in a state, for example, with a subsidiary there, had to collect sales taxes on items purchased remotely. Back then, mail order was the primary remote sales option.

In recent years, as the internet grew and popularized online shopping, states have enacted their own and various nexus designation rules, as shown in the Tax Foundation map. In these states, Quill's physical presence standard is expanded.

Overall, writes Joseph Bishop-Henchman, executive vice president of the Washington, D.C.-based tax policy nonprofit in a Fiscal Fact examining the coming SCOTUS ruling and potential Congressional action, 31 of the 45 states with a sales tax have rewritten their state tax collection authority to sellers with no physical presence in the state.

That earns 31 this week's honor as the By the Numbers figure.

Undercutting the Commerce Clause: This variety of sales tax laws is problematic, for buyers, sellers and states.

"Some of these laws are well-crafted, but many are not and are imposing significant and disparate compliance burdens on out-of-state sellers," writes Bishop-Henchman. "To date, federal and state courts have upheld these laws, and there is strong likelihood that the U.S. Supreme Court will do so as well."

And this, adds Bishop-Henchman, has created precisely the scenario that the Commerce Clause sought to avoid: unlimited tax authority that burdens interstate commerce.

Congressional standard preferred: What really is needed is federal legislation that would, in the words of the Tax Foundation white paper, reestablish meaningful limits on state tax powers.

"Congress should act to rebuild limits on state tax power, and these limits should include a nexus standard that scales with the burden it imposes," writes Bishop-Henchman.

Final decision by…: Given that the days of no-sales-tax on online shopping are effectively over, what do you think should happen?

Should we just let the Supreme Court justices decide? Of course, that decision could be so narrow as to not affect the rest of the sales-tax-collecting states.

Or do you think comprehensive federal action on interstate sales tax collection is necessary, regardless of the coming SCOTUS ruling?

While Congress has a spotty record on tax legislation, personally I'd prefer a federal law in this area.

My main reason for preferring federal action is that it would be easier, relatively speaking, to make future changes to a law than to go through the tedious legal system.

Let's be real. The Quill ruling on mail order sales made it clear that time and taxes march on. Changes to sales tax laws will be necessary as technology, shopping and interstate commerce continue to evolve.