Yes, you did read my 10-part 2018 tax year inflation adjustments series last year. Thank you. Then Congress and the prez went and changed the laws, meaning the adjustments had to be adjusted. Here are some of the key inflation changes just released by the Internal Revenue Service so that they are up-to-date with the Tax Cuts and Jobs Act's provisions. 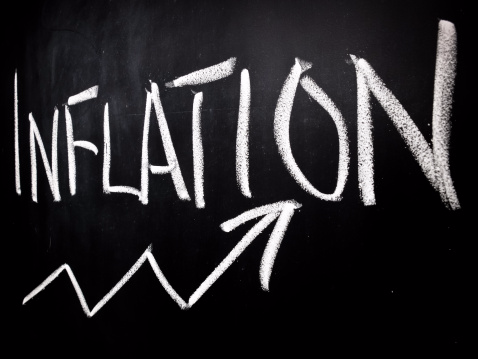 The IRS just updated its previous 2018 tax year inflation adjustments based on changes in the new tax laws that took effect on Jan. 1.

Remember all that 2018 tax law related inflation data that the Internal Revenue Service announced last fall and I covered in a series of posts? Forget it. Well, much of it.

In addition to doing away with some items that, through 2017, were affected by inflation, the TCJA also changed the inflation measurement. It now is based on what is known as the chained consumer price index (CPI), which typically provides smaller bumps based on inflation.

Some of these new tax law and inflation amounts were updated in some of the aforementioned pre-TCJA inflation posts. However, I'm covering it again here, and in this lone consolidated post just to be done with it to get it out to all y'all readers of the ol' blog ASAP.

But before we dive into all these inflation figures again, one final tax year note.

All the amounts in this post are for the 2018 tax year. They do not apply to your 2017 tax returns that you are working on and must file by this coming April 17.

If you need any 2017 amounts for items discussed here, you can find them in my original inflation series posts where I included them for comparison purpose. The index of those posts is at the end of part 1; just search for 2017 in each post.

But it lowers some rates, especially at the top, going from 39.6 percent to a maximum 37 percent top tax rate.

The table below shows what tax rate you'll use to figure your 2018 income taxes when you file your return in 2019:

The new tax law almost doubles the standard deduction amounts for each filing status. For 2018 (and they will be adjusted for inflation in coming years) they are:

Before you get too excited about these larger standard deduction amounts, consider the reason why they were raised. They are larger because you cannot claim any personal or dependent exemptions in 2018 and through 2025 when this and other individual tax provisions expire unless renewed by a future Congress and president.

To pacify folks upset with the loss of exemptions, the new law enhances the child tax credit. It's doubled to $2,000, although the refundable portion is only increased. And to accommodate taxpayers with larger and older families, the TCJA also includes a new $500 credit for non-child dependents.

Itemized deduction limits, old and new: While the items here technically aren't affected by inflation, I'm including them in this post since the decision to use the standard amount or itemize are connected. You need to look at both deduction options to find and use the one that provides you the most tax savings.

Plus, the IRS' latest inflation announcement does cover some of these deduction considerations.

If you find filling out Schedule A is better for you than claiming the standard deduction and you're a higher earner, you don't have to worry about your income reducing the amount of your itemized deductions. That rule, known as the Pease limitation (one of several laws named after their advocates, in this case the late Ohio Democratic Rep. Don Pease who championed deduction limits on higher-income taxpayers) was killed in the TCJA.

However, there is a statutory limit under the TCJA of $10,000 for state and local tax write-offs. That 10-grand limit is the total of your income or sales tax claimed plus your real estate (aka property) taxes.

The mortgage interest deduction limit drops from the old $1 million cap to $750,000 for new mortgage debt after Dec. 15, 2017 ($375,000 for married filing separately taxpayers). The IRS also has issued guidance on the deductibilty under the new law of home equity debt.

You might remember reading something about private mortgage insurance (PMI) still being deductible as an itemized expense, but that's for the 2017 tax year only. For now.

Casualty losses in 2018 will only be allowed for federally-declared major disasters.

Miscellaneous itemized deductions that had been subject to a floor of 2 percent of adjusted gross income (AGI), such as unreimbursed employee business expenses and tax preparation fees, have been eliminated.

On the plus side for Schedule A filers, the AGI threshold for deducting medical expenses returns to the 7.5 percent level for 2018 and 2019 tax years. It goes back to 10 percent for all filers regardless of age in 2020.

And the AGI limit for charitable contributions has been increased to 60 percent. This won't affect most of us dropping off our kids' outgrown clothes at the church thrift shop or writing a check to the local food bank. It does mean, though that wealthier folks can now give more.

Health care policies and savings accounts: High deductible health plans (HDHP) provide, as the name indicates, coverage with higher deductibles in exchange for lower premiums. To make up for the deductible, subscribers can open an associated Health Savings Account (HSA) to cover those out-of-pocket costs.

The IRS issued inflation changes to these accounts in May 2017 and I included them in the medical segment of comprehensive 2018 inflation adjustments. Some of those numbers have changed again.

To comply with TCJA provisions, the IRS reduced by $50 the 2018 limit on HSA contributions for family coverage from $6,900 to $6,850. The HSA contribution limit for individual coverage remains at $3,450

Since excess contributions to an HSA are included in gross income as well as subject to a 6 percent excise tax, individuals with family coverage should make arrangements to adjust their contributions.

HSA owners who've already contributed $6,900 must withdraw the excess amount, plus earnings, prior to filing their federal income tax returns next year.

Alternative minimum tax (AMT): This parallel tax was created in the 1960s to ensure that rich taxpayers paid at least some (aka minimum) amount of tax. Originally, it was not indexed for inflation. Congress finally took care of that oversight in 2013, creating inflation indexing of AMT exemption amounts as part of the American Taxpayer Relief Act.

For 2018, the revised inflation-adjusted AMT exemption amounts start at:

The AMT phaseout threshold amounts this year are increased to $1 million for married taxpayers filing a joint return and $500,000 for all other taxpayers.

Adoption tax credit and assistance programs: Beginning with the 2018 tax year, the credit allowed for a child's adoption is $13,810. That same credit amount also is available for the adoption of a child with special needs.

And that $13,810 amount also is the limit for workplace adoption assistance programs. In these cases, employers can help their workers adopt by excluding up to that amount from the employee's gross, taxable income for the adoption of a child. This covers all adoptions, including those of children with special needs.

As with the credit, the adoption assistance excludable income amount begins to phase out at the same MAGI levels.

The table below shows the 2018 tax year income amounts by filing status used to determine the EITC. Your earnings this year must be less than:

Estate tax: Donald J. Trump and Republican-controlled Congress has hoped to end the estate tax or, as its opponents call it, the death tax. But they finally had to draw the deficit line somewhere, so this tax remains on the books.

However, they did double in 2018 the amount of a decedent's estate value that's excluded from federal taxation. That's $11.18 million this year.

And yes, that new base estate tax exclusion amount will be adjusted for inflation in future years.

There are a few more items in the new IRS inflation announcement. I'll sort through them and post on those figures later.

But for folks ready to do some 2018 tax year planning, the changes here cover the basics for most individual taxpayers. Have at it!

Glen, I should have included that; my mom is older and legally blind! I've added the amounts for 2018, which did not change from the original IRS inflation release pre-TCJA. This tax year for folks age 65 or older or visually impaired it's $1,300 extra, or $2,600 per couple. Kay