Got a refund? Owe the IRS? Time for a Paycheck Checkup! 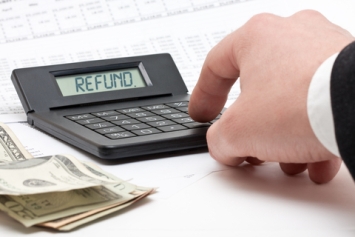 Internal Revenue Service filing data complete through March 16 shows that it has issued almost $183 million in tax refunds to around 62 million taxpayers.

Many of those folks now getting refunds planned on the tax-back money. They used paycheck over-withholding as a forced savings account.

These are the types of taxpayers the IRS is hoping to reach as part of Paycheck Checkup Week, which kicked off on Monday, March 26. Over the next few days, the IRS is making a special effort to get people to take another look at their payroll withholding.

Such reexamination is especially important now that the Tax Cuts and Jobs Act (TCJA) is in place.

Under TCJA, we have new tax rates and income brackets. Some tax situations and breaks that ultimately affect filers' tax bills have changed, such as the standard deduction (increased) and child tax credit (revised). Others, like personal exemptions and some itemized deductions, been eliminated altogether.

Paycheck checkup targets: It's generally a good idea to check your withholding at the beginning of each year regardless of what Congress does or doesn't do to the tax code.

The same is true when personal circumstances change, such as a marriage, birth or adoption of a child or an employment change for you or your spouse.

But with the new tax law changes, the IRS says it's especially important for certain people to reevaluate their withholding to ensure that it's correct. They include:

If you're among one of more of these groups, or just want to reassess your withholding for fun (it happens!), the IRS recommends you use its online withholding calculator, which it recently updated to take the TCJA provisions into account.

The withholding calculator compares your estimate to your current tax withholding so you can decide if you need or want to change payroll withholding. When using the calculator, it's helpful to have your completed 2017 tax return on hand.

W-4 timing: If you decide you do want to change your withholding, the final step is to file a Form W-4, Employee's Withholding Allowance Certificate, with your employer.

Even if you decide ultimately to continue over-withholding, it's a good idea to know just how much of a refund to expect.

The average refund as of mid-March tops $2,900 (or more than $3,000 for folks who had their refunds directly deposited). That's a nice chunk of change.

And it's large enough to allow some taxpayers to have their tax cake and eat it, too. They can adjust their withholding to still get a refund next year, but perhaps not as big, giving them more cash to spend throughout the rest of the year.

On the other side of the equation, having too little tax withheld can mean an unexpected tax bill or potentially a penalty when filing your 2018 return in 2019.

Regardless of where you fall on the withholding scale, submitting a new W-4 now means more time for tax withholding to take place and without a dramatic effect on your paychecks.

If you wait until later in the year, however, your payroll office will have fewer pay periods to make the tax changes. That means the change could have a bigger impact on each paycheck as 2018 winds down.

And that's definitely not a payday situation you want to encounter as the annual holiday spending season arrives.