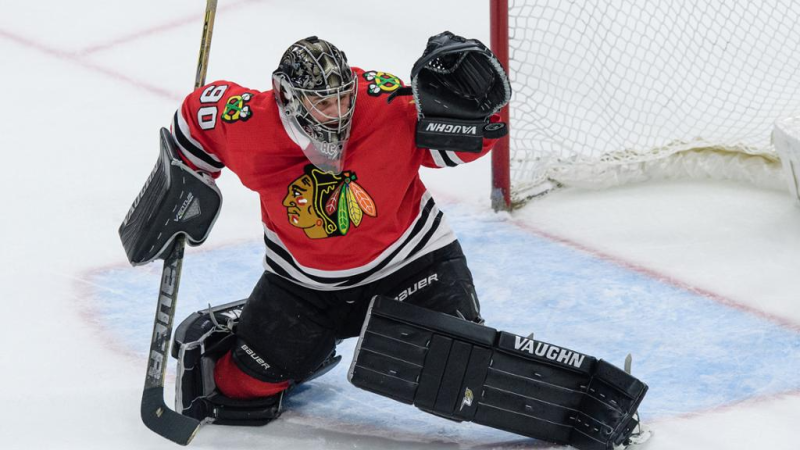 Scott Foster, accountant by day and emergency NHL goalie for one night, makes a save in the Chicago Blackhawks win March 29 over the Winnipeg Jets.

Accountants know all about pressure, especially during tax season. But Scott Foster, a Chicago-area numbers cruncher, last night ably handled even more, albeit a different kind of, stress.

Foster faced, and bested, some of the National Hockey League's best.

Injuries lead to NHL debut: A series of injuries forced Foster to suit up and step into the goal crease for the final 14 minutes of the Chicago Blackhawks March 29 game against the Winnipeg Jets. The 36-year-old amateur hockey player stopped all seven shots he faced, capping the Hawks' 6-2 win.

Foster was a goalie for Western Michigan University, playing his last competitive game with that team 12 years ago. He now participates in several Chicagoland recreational hockey leagues. It was his just-for-fun play that led to his professional hockey debut.

Foster is among a group of amateur goalies who are on hand for Blackhawks home games, available to fill in when situations like last night's arise. Usually, Foster has a game-day meal and sits in the press box to watch the NHL match.

The biggest thrill most emergency goalies expect is to simply sit on the NHL team's bench and watch the game up close alongside the pro players.

But the ice gods had more in mind for Foster.

The Blackhawks' Anton Forsberg, who's been the team's starting goalie since Corey Crawford was hurt last December, was injured during the pregame skate. Forsberg's backup, Collin Delia, left in the third period due to cramps.

That meant Foster, whom the Blackhawks signed to a no-cost amateur try-out (ATO) contract before the puck dropped to serve as emergency backup following Forsberg's mishap, put on his helmet and hit the ice.

Back to financial saves: I'm not sure if Foster is mild-mannered, but last night he got to be a professional hockey Superman for most of the third period.

"A few hours ago, I was sitting at my computer typing on a 10-key and now I'm standing in front of you guys just finished 14 and a half minutes of NHL hockey," Foster told reporters gathered around him after the game.

"This is something that no one can ever take away from me," he said. "It’s something that I can go home and tell my kids and they can tell their friends. Just a ton of fun."

Foster will always have his seven saves, as well as a game puck and the post-game celebration where his temporary teammates presented him with a champions belt.

Today, though, it's back to his accounting office and helping clients make smart tax and financial moves.

His colleagues on that online professional network laud Foster, not surprisingly, as "a team player" and "a valuable addition to any team" who is "very reliable in getting the job done."

Any financial adviser will tell you that tax planning is part of the job. But when it comes to taxes, you want an accountant or other professional who specializes in tax matters and knows the ins and outs of saving you tax dollars while also keeping the Internal Revenue Service satisfied.

If you're still looking for a tax professional, good luck. We're heading into crunch time and most tax preparers are booked.

You might, however, be able to find a tax adviser/preparer who will file an extension for you and then help you complete your return by the October due date.

As you search for tax help at this late date, don't be in such a hurry that you hire help that's not really up to the job or your standards. Be sure to thoroughly check your potential tax professional's credentials.

You probably won't find a tax pro with stats like Foster's NHL numbers, but you do want look for other more tax-specific qualifications. That way, she or he will be able to make the tax saves that are important to you.