UPDATE, March 24, 2018: The fiscal year 2018 omnibus spending bill signed into law on March 23 contained a compromise that should ensure that restaurant workers aren't stiffed under the new tip pooling regulation. Details follow in the post. 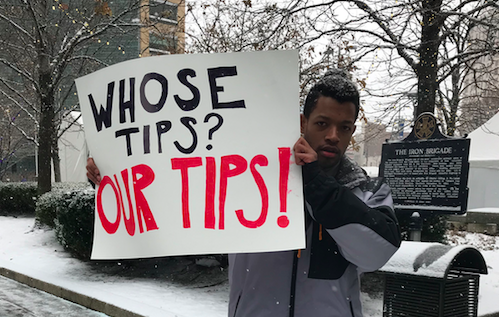 If you're going to a restaurant or bar today to watch the Super Bowl instead of to your buddy's for an LII party, tip your servers well.

They soon could be losing their gratuities.

Return of shared tips: With tip pooling, restaurants took all servers' tips, combined them and then handed out the money to all staff at management's discretion. In 2011, the Obama Administration issued a rule prohibiting such tip distribution.

Obama's Department of Labor (DoL) said employees, not restaurants, own the tips left waiters and waitresses. In addition, restaurants were not allowed to pool tips or give them to non-tipped employees. The rules applied to all levels of wage-earning servers.

Trump's DoL would "rescind the current restrictions on tip pooling by employers that pay tipped employees the full minimum wage directly." That would mean restaurants that pay servers the full $7.25 minimum wage can pool tips.

Staff who are tipped now can be paid as little as $2.13 per hour, depending on the state. Where folks get that kind of wage, if you can call it that, the need for tip income is very real.

And yes, if they do make enough thanks to the gratuities added to such astoundingly low wages to have to file a tax return, that tip income is taxable.

Spreading the tips around: The Trump Administration says it's looking out for all restaurant workers by making the rule change.

That's the same rationalization used by the National Restaurant Association.

Or not spreading the tips around: However, the proposal also would let restaurant owners to keep the pooled tips.

The Trump proposals allows restaurants to collect tipped workers' gratuities and encourages management to redistribute those tips to all workers. But it does not require them to do so.

That's just added ammunition from those opposed to the return of tip pooling. Not that they necessarily needed it.

They already argue that rather than improving the economic prospect of restaurant workers, tip pooling would do major damage even if wait staff gets back some of their tips.

And apparently research by the Trump DoL agrees. But we're not going to see that data.

Wage impact data pulled: The ostensibly populist Trump Administration's own people found that the revocation of the Obama rule preventing tip pooling could hurt workers and decided not to include that information in the public record.

"Labor Department leadership scrubbed an unfavorable internal analysis from a new tip pooling proposal, shielding the public from estimates that showed employees could lose out on billions of dollars in gratuities," according to Ben Penn, a reporter for Bloomberg Law.

Penn's story, which gets this week's Sunday Shout Out, says that four current and former DOL sources confirmed that:

"Senior department political officials—faced with a government analysis showing that workers could lose billions of dollars in tips as a result of the proposal—ordered staff to revise the data methodology to lessen the expected impact, several of the sources said. Although later calculations showed progressively reduced tip losses, Labor Secretary Alexander Acosta and his team are said to have still been uncomfortable with including the data in the proposal. The officials disagreed with assumptions in the analysis that employers would retain their employees’ gratuities, rather than redistribute the money to other hourly workers. They wound up receiving approval from the White House to publish a proposal Dec. 5 that removed the economic transfer data altogether, the sources said."

Bloomberg Law has filed a Freedom of Information Act (FOIA) request for the transfer report, which is being processed by the DOL’s Wage and Hour Division.

Comment without study: Unfortunately, any FOIA decision likely will come too late. Public comment on the rule ends on Monday, Feb. 5.

But that's OK, says the DoL.

A cost/benefit analysis will be part of the final rule, according the Labor Department. That analysis will incorporate data or information provided by the public during the comment period on the potential benefits and transfers of the proposed rule change.

That's why, added the DoL, it "has asked some specific questions that may help the Department quantify benefits and transfers in the Final Rule analysis."

We shall see. Or, based on what's happened so far, maybe not.

UPDATE, March 24, 2018: After the outcry from labor advocates, a compromise proposed by Sen. Patty Murray (D-Washington) was included in the recently enacted fiscal year 2018 spending bill. The Department of Labor tip pooling regulation will go into effect, but will contain a specific prohibition against employers keeping workers' tips instead of handing out the gratuities to both wait staff and back-of-house workers.

So what part of the proposed provision would have allowed employers to keep tips? Short of actual encurred cost in processing (i.e. cerdeit card charge) I was under the impression that this was already law. So where in the existing proposed legislation did it specifically counter existing law on this issue? Please reference your assumptions.

I would speculate that it does not address this issue specifically and that the proposal did not expand the capability of employers keeping any tip income that is not addressed in previous law. I could speculate further on why you would represent the legislation like this but it may be irresponsible to suggest you have an undeying politicol agenda.

I would also be interested on your position on the political and corporate global agenda of cashless societies that as a result would completely destroy the advantage of the us tipping custom. Many staff who treat their job as a profession take home substantially more than they would anywhere else unless more time and training are invested (i.e. college)