Presidential taxes, personal & for us all, on Presidents Day 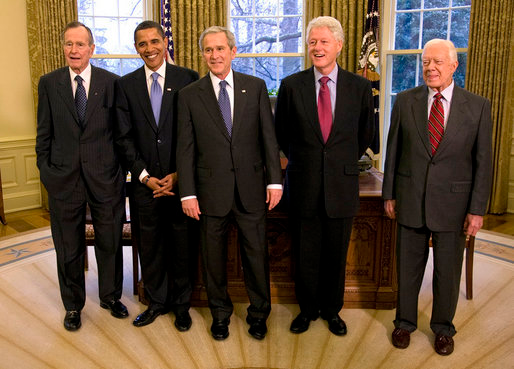 George H.W. Bush, Barack Obama, George W. Bush, Bill Clinton and Jimmy Carter, got together in the Oval Office in 2009. The five living U.S. presidents are part of an exclusive club. They also are part of the reason for today's Presidents Day celebration. (Photo by White House photographer Eric Draper/GWB White House archives)

George Washington's birthday actually is Feb. 22, 1731. However, we've celebrated it on the third Monday of February since 1968 thanks to a law that mandated most federal holidays occur on Mondays.

We've also unofficially changed the Father of Our Country's day to the more inclusive Presidents Day. Some commanders in chief are more loved than others, so I leave to your personal preference to decide which U.S. presidents you honor today.

Me, I'll stick with George. I've already played "One Last Time" from the Broadway musical "Hamilton," the lyrical rendition of Washington's farewell address and which uses much of the final paragraphs of Washington's Farewell Address, underscoring the gravity and significance of these words to the future of the young United States.

Lincoln's tax bona fides: I do, however, want to sneak in Honest Abe, whose birthday was earlier this month (the 12th).

Abraham Lincoln deserves special attention because of his leadership during the Civil War and, of course, for issuing the Emancipation Proclamation.

OK, Lincoln didn't actually write the tax code. But he saw the need for taxes to help finance the Civil War. He signed into law in August 1861 the legislation that created the United States' first federal income tax.

Modern day tax presidents: The tax system that we know and complain about today became law on Oct. 3, 1913. The president to thank or blame for enacting the Revenue Act of 1913 with the stroke of his pen is Woodrow Wilson.

Over the century-plus since, the Internal Revenue Code has been tweaked many times.

The most notable changes came in 1986 with the historic Tax Reform Act of that year. It was a bipartisan effort, led by Republican President Ronald Reagan and Rep. Dan Rostenkowski, the Democrat from Chicago who chaired the House Ways and Means Committee, that simplified the tax code, broadened the tax base and eliminated many tax shelters (for a while).

The Bushes also had some noteworthy tax code involvement.

President George Herbert Walker Bush, aka 41, served only one term due in part, say many presidential historians, because he reneged on his "read my lips, no new taxes" campaign promise. His son, President George W. Bush or 43, was able to enact a series of substantial but temporary tax cuts that, much to the younger Bush's ultimate chagrin, became associated with his name.

Now we have the Tax Cuts and Jobs Act, which will affect our 2018 through 2025 tax returns, and maybe beyond then if Capitol Hill lawmakers then decide to extend the law.

It's not the most expansive tax-cutting bill, but it does provide some substantial ones (particularly for the wealthier among us, according to critics) and the loss of some tax popular deductions. Over the next few years, we'll learn whether most taxpayers, aka voters, are happy with the changes.

Presidents' personal taxes: I couldn't let this day pass without mention of the taxes paid by the occupants of the Oval Office.

It's no secret that Donald J. Trump thumbed his nose at the tradition followed by major presidential candidates to release their tax returns during the campaign.

Trump also has yet to make public his first Form 1040 filed as president. (Neither has Vice President Mike Pence released his 2017 tax return, although he did reveal his 2015 tax year filing during the 2016 campaign.)

We did get a glimpse of Trump's 2005 tax return, which he didn't officially release, although there's some speculation that Trump authorized the anonymous delivery of the partial tax paperwork to Pulitzer Prize winning tax and political journalist David Cay Johnston.

After the return was made public, the White House confirmed that Trump paid $38 million in federal income taxes and wrote off more than $100 million in business losses in 2005.

Tax privacy is paramount: We'll probably never see any other Trump tax returns, unless they somehow figure in Congressional or Special Counsel investigations. Even then, the documents likely would be kept confidential or highly redacted.

That's because income tax data is private and by law the protection of the filings, be they 1040s filed by a president, a presidential candidate, any other politician or plain old regular taxpayers like you and me, is protected.

However, as noted earlier, since the early 1970s most presidents and candidates for the highest office in the land have chosen to release their returns publicly. The Tax History Project at Tax Analysts, led by project director Joseph Thorndike, has compiled an archive of those presidential and presidential hopeful tax returns.

Once you finish up your Presidents Day shopping at all of today's holiday-related sales, enjoy thumbing through the 1040s of some of our former leaders.

Tax transparency is telling: There's some fun insight into the men who've held the country's highest office in those forms.

Take the case of President Richard Nixon's filings. He took advantage of every possible deduction he could. That's a sound tax strategy that's recommended even by the Internal Revenue Service, but only as long as you claim legal write-offs.

Nixon, however, in his effort to get his and wife Pat's tax bill down to only $792.81 on more than $200,000 in income, claimed a deduction he shouldn't have. He backdated the donation of his vice presidential papers.

That's just one example of why getting a look at a candidate's and/or president's tax returns is more than just political voyeurism. It's a good way to judge the character of those who seek the office.