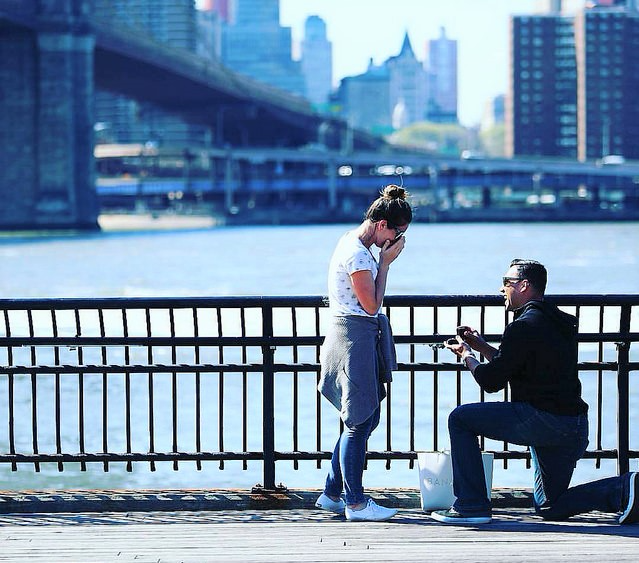 I hope she said yes! (Photo by Matt via Flickr)

Valentine's Day has become one of the most popular days of the year to propose.

If you're anticipating popping or answering the big question at an intimate romantic dinner tonight, taxes likely won't be on your mind. But perhaps they should be.

Love and money: I'm a big fan of marriage. I've been in a mostly happy one with the hubby for a looong time. (Yes, I was a child bride!)

But even back then, I was a tax geek. That's why our choice of wedding date — the year at any rate — was based partially on a tax break. It created a tax deduction for a married couple when both spouses had jobs.

That tax break is long gone, but our union has endured, even though in some cases we encountered a marriage penalty.

Marriage penalty or bonus matches: A marriage penalty occurs when a pair combines all their income on one Form 1040 and it produces a bigger tax bill than if the duo had filed as two single taxpayers and then totaled those individual tax obligations.

On the other hand, some couples get a marriage bonus. As the name indicates, these married folks find that their joint filing saves them tax dollars.  A marriage bonus typically shows up when there's a large difference in spousal income.

Or at least that's how it works through 2017 tax filings.

But what will happen under the new tax laws in the Tax Cuts and Jobs Act (TCJA) that apply to 2018 through 2025 returns?

The Tax Foundation has some answers.

New law, old penalties and bonuses: Both marriage penalties and bonuses could be completely eliminated, but it would require a significant overhaul of the tax code that drastically changes the current distribution of income taxes paid, writes Tax Foundation Analyst Amir El-Sibaie.

Since Congress didn't really reform the tax code under the TCJA, that means marriage penalties and bonuses are still around.

But the Washington, D.C.-based nonprofit's recent numbers crunching found that found that the marriage penalty under the new law will now mostly affect higher income earners.

The reason is the restructuring of the tax brackets so that the ones for married filers are exactly double those for single filers except at the now top 37 percent rate. Previously, even medium-income married earners felt the marriage penalty.

Lower-earners hit, too: Still, because tax situations are so varied, even low-income couples can face a marriage penalty, especially when the pair claims the Earned Income Tax Credit (EITC).

The number of children also are a factor.

In one example in the Tax Foundation analysis, a lower-earning couple with one kid faces a more than $600 marriage penalty. There are a couple of reasons why.

First, if the pair had not tied the knot, one unmarried individual could have filed as head of household, which provides a larger standard deduction and wider tax brackets. Once they married, however, the couple lost the benefit of head of household status and faced higher combined taxable income.

That higher income is reason two for the marriage penalty. It pushed them into the EITC's phaseout range and substantially reduced the credit they could claim.

Personal matters matter to taxes: The bottom line is that marriage penalties and bonuses are like all other parts of the tax code, both the old one still in effect for 2017 tax year filings and the new laws we started dealing with when 2018 rolled around.

And like all those tax situations, your personal variables affect your tax bill and marriage penalty or bonus.

The Tax Foundation modeled the effects of marriage on a couple's tax bill based on the pair's level of income and the equality of the couple's income, ranging from couples with one earner to spouses with equal incomes.

They then calculated the marriage penalty or bonus under the TCJA for households with no children, one child and two children. The result is some colorful graphics, like the one shown below for a couple with two kids. 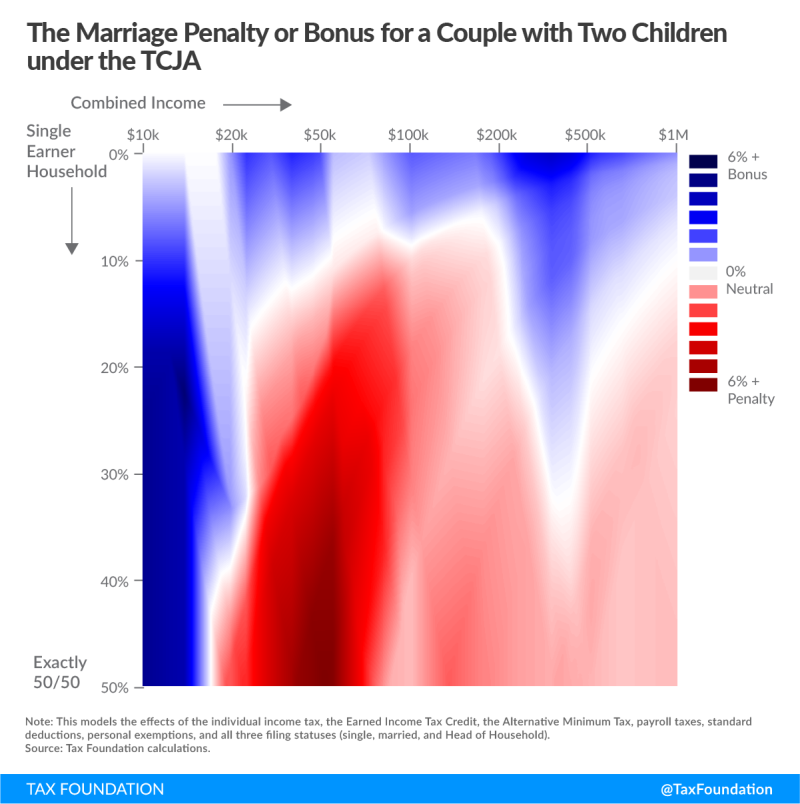 I do, taxes included: Check out the full report. It could give you something to think about in addition to the standard wedding planning issues.

And about those upcoming nuptials, will a change in your post-wedding tax bills change your decision to propose tonight or your answer if you're the one asked?

Probably not, and it shouldn't. After all, the vows do say for richer and poorer.