Same old, same old. That's the message the Internal Revenue Service got today when the Trump Administration released its fiscal year 2019 budget. The IRS' base budget amount is about the same as prior years and some old tax enforcement ideas are proposed again. 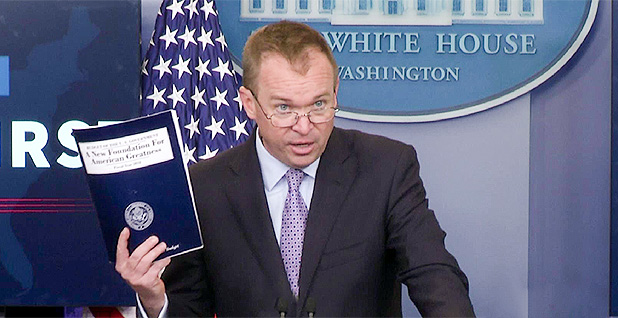 Office of Management and Budget Director Mick Mulvaney discussing the Trump Administration budget last year. For release of the 2019 fiscal year budget, Mulvaney decided to stay off camera "because it's really boring." You can decide if he was right by listening to his remarks yourself via C-SPAN.

It's no secret that the Internal Revenue Service has for years been asking for more money to do its job. Was Donald J. Trump listening when he and White House staff put together their new federal budget?

In the fiscal year 2019 budget released today, Trump proposes the IRS get a base budget of $11.1 billion. That's a cut from its previous $12 billion fiscal year allotment.

But the Trump Administration also proposes the IRS get an additional $15 billion over the coming decade so that it can "expand and strengthen the enforcement of tax law to ensure that all Americans are paying the taxes they owe." The initial portion of this funding would be $320 million in FY19.

The White House request is based on the assumption that you have to spend some tax money to get more tax money.

Specifically, the budget document says, "These additional investments proposed over the next 10 years are estimated to generate approximately $44 billion in additional revenue at a cost of $15 billion, yielding a net savings of $29 billion over 10 years."

OK. It sounds like at least some folks at 1600 Pennsylvania Avenue were listening to John Koskinen, who retired from the IRS commissioner post last November, when he said during a 2016 speech that it costs the IRS 35 cents to collect $100 in federal revenue.

IT emphasized: Increasing the IRS' efficiency is a key component of upping that return on investment even more. That's why Trump and his budget writers designated $110 million for information technology (IT) modernization efforts.

While taxpayers are increasingly turning to online IRS options, the budget document says that the agency itself "relies on antiquated tax processing systems (many of which date back to the 1960s) and handles most of its interactions with taxpayers, other than tax filing, through the mail."

Upgrades to the tax agency's systems, it says, would allow IRS staff to have up-to-date, accurate information about taxpayer accounts when they work with taxpayers.

Focus on enforcement: On the enforcement side, the budget would like to see the IRS spend its money next fiscal year on efforts that ensure that taxpayers comply with their obligations, that tax refunds are paid only paid to eligible taxpayers and that taxpayers are protected from criminals seeking to commit fraud.

To achieve those goals, the budget wants to:

Of course, Trump's latest budget proposal, like all those delivered by presidents before him, is basically a wish list.

Congress, even one controlled by his own Republican party, will pick and choose from today's document to determine which components will appear in future legislation.

But it's always a good idea to have an idea of just what might happen and how much it will cost.