MLK Day: Make a difference in the world and possibly on your tax return 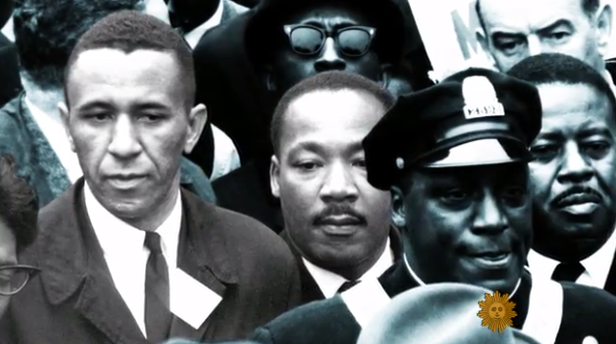 The Rev. Gilbert Caldwell (left) was part of the civil rights movement led by the Rev. Dr. Martin Luther King, Jr. (center). Click the screenshot above to watch the full CBS Sunday Morning feature on how a group of fifth-graders helped correct a 60-year-old act of discrimination against Caldwell and his wife.

As a young man, the Rev. Gilbert Caldwell marched with Dr. Rev. Martin Luther King, Jr., whose life we honor and celebrate on this federal holiday.

Racial discrimination was among the many wrongs King, Caldwell and other civil rights activists back then were working to right. It's a fight that continues today, which is part of the reason for MLK Day.

It also was something that Caldwell and his wife Grace confronted in 1957 on what should have been one of the happiest times of their lives, their honeymoon.

Post-wedding crash: After exchanging their vows in North Carolina, the newlyweds drove eight hours to a resort in the Poconos, the mountainous stretch of northeastern Pennsylvania that once was America's honeymoon capital.

But things didn't work out as the Caldwells had planned or hoped. They weren't allowed to check in at the Mount Airy Resort, the couple told CBS Sunday Morning correspondent Steve Hartman, because the hotel's "guests would be very unhappy."

So the Caldwells did what they had to do more than 60 years ago. They accepted the indignity and checked into a nearby black-owned hunting lodge.

But they had each other. And that incident was part of what prompted Caldwell to throw himself into King's movement.

Old injustice spurs students' new activism: Though no longer young, Caldwell is still committed to the civil rights cause, speaking whenever and wherever he can about his experiences.

And one of his talks resulted in him and his bride getting their long overdue honeymoon.

Caldwell spoke to a fifth-grade class at a Titusville, New Jersey, elementary about the importance of standing up for what's right. They took his words to heart and very personally.

Upon hearing the honeymoon story, every youngster had the same reaction: Heartbreaking. Just terrible. So wrong.

So each student individually wrote the resort that turned away the Caldwells, or rather the Mount Pocono hotel that replaced the old lodging, and asked the new management to belatedly do what should have happened six decades ago: Give the Caldwells the honeymoon they were denied.

The operators of the Mount Airy Casino and Resort agreed with the students. And Gilbert and Grace Caldwell finally got their overdue post-wedding trip.

It doesn't make up for decades of racial injustice, but, as Hartman noted, it's a step.

King-inspired doing and giving: Lots of people will be, like those impressive New Jersey fifth-graders, taking their own steps today to make the world a better, fairer and less hate-filled place.

Dr. King's holiday has become a day of community service.

If you can't make it to your favorite nonprofit today to volunteer, consider making a financial donation so that it can keep doing its good work.

Changes to the tax code under the just-enacted Tax Cuts and Jobs Act (TCJA) have many charities worrying about their financial security. Standard deduction amounts are dramatically increased, meaning more folks are now more likely to forego itemizing.

Charity concerns under new tax law: Without that tax deduction reward, charities fear that folks won't be as philanthropic. They might have a point, according to recent estimates by the nonprofit, nonpartisan Tax Policy Center (TPC).

"The Tax Cuts and Jobs Act (TCJA) will shrink the number of households claiming an itemized deduction for their gifts to non-profits from about 37 million to about 16 million in 2018, according to new Tax Policy Center estimates. At the same time, the new law will reduce the federal income tax subsidy for charitable giving by one-third, from about $63 billion to roughly $42 billion.

Overall, the TCJA will reduce the marginal tax benefit of giving to charity by more than one-quarter in 2018, raising the after-tax cost of donating by about 7 percent."

The TPC figures are even more dire than earlier projections by United Way Worldwide, one of the largest global nonprofits. That organization's leaders earlier said the GOP tax law changes could cost charities $13 billion every year.

"We've raised limits so that rich people can give more to charity," he said, referring to the change that allows individuals to donate in one tax year up to 60 percent of their adjusted gross income instead of the previous 50 percent limit. That, said Mnuchin, should encourage wealthy donors to give more.

I hope it's not a lot who close their wallets. Or that lots of other donors will take their place. As the Caldwells' story indicated, all of us, regardless of age, can make a difference.

So on this Dr. Martin Luther King, Jr. Day, consider making a difference in a world where we read, hear and see horrible, unfair and, to quote the Titusville youngsters, so wrong things every single day.

And if the New Jersey students have inspired you, think about giving to a charitable effort connected to your local schools.

The tax code still says that qualifying organizations can be more than just charities. Any school district program, for example, that does not operate for profit and is solely supported by state and local governments can accept your tax-deductible donations.

Most importantly, you'll feel as good as those youthful activists did when they did their good deed for the Caldwells.