How did the federal government shutdown(s) of 2018 compare to prior closures?

And so it begins. Uncle Sam is out of money, forcing closure today of many federal operations. How long will this latest government shutdown last? Based on prior shutdowns, it could be just today, or this could drag out for weeks.

UPDATE, Feb. 9, 2018: The federal government closed briefly again on Feb. 9, but only for a few hours. A two-year budget agreement means we'll be able finish out the filing of our 2017 returns, either by the April deadline or the extended due date in October, without further interruption.

In addition, this latest 5½-hour overnight closure ended with a budget bill that also revived for the 2017 tax year some popular homeowner and education tax breaks that had expired at the end of 2016. 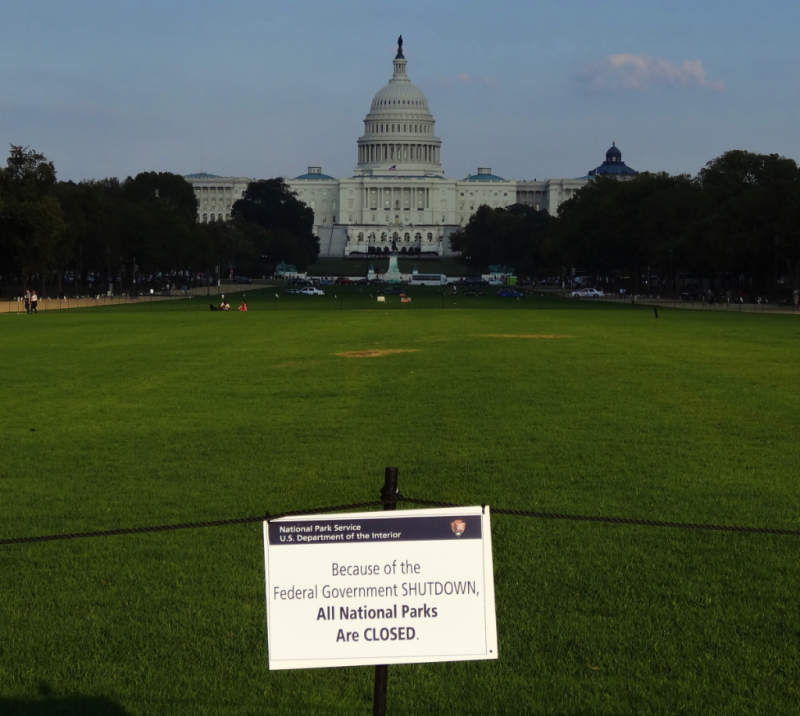 National park properties, such as the National Mall west of the U.S. Capitol, were closed to visitors in October 2013, the last time there was a federal government shutdown. This time, most national park sites will be open, at least for now. (Photo by Emw via Wikimedia)

Welcome to the shutdown of the federal government, version 01-20-2018.

UPDATE, Jan. 22: Congress came to an agreement today to end the latest government shutdown. But stay tuned. This latest continuing resolution funding Uncle Sam's operations runs out at midnight Feb. 8, meaning we could be right back here with shutdown #20.

While many federal workers technically are off the clock, the House and Senate are working today, hoping to make this closure one of the handful that lasts only a day.

This is the 19th 20th time with the brief February shutdown that Uncle Sam has closed most of his doors since Congress introduced the Congressional Budget and Impoundment Control Act in 1976. That measure established the federal budget process we now use.

Short-term shutdowns: More than half of those shutdowns were like January 2018 one. They occurred, at least in part, over a weekend. The second 2018 shutdown in February — the first time the federal government closed twice when one party (this time Republicans) controlled the House, Senate and White House — was just a few overnight hours.

In both 2018 federal government closures, their brevity was the best-case scenario for Americans who could be affected. It meant that we probably didn't notice the loss of some services.

There is not, however, a best-case scenario for federal government employees working during any shutdown, regardless of the length. They'll be doing so for free. They will get the money for the time they put in during the closure, but not until after Uncle Sam is funded again.

That puts these folks in the uncomfortable — and untenable — J. Wellington Wimpy territory of trying to figure out how to pay for groceries and utility bills without any income.

Longer furloughs for federal workers: As for the tax returns the Internal Revenue Service will start accepting on Jan. 29, if lawmakers can get their acts together quickly, the shutdown shouldn't do too much damage to filing season 2018.

But things will get worse for us taxpayers and federal workers if this closure drags out like some of the previous government shutdowns.

Data from the Congressional Research Service (CRS) show that six shutdowns in the past four decades lasted more than 10 days. That includes the last one we went through, ushered in by Texas GOP Sen. Ted Cruz reading Dr. Seuss' "Green Eggs and Ham," back in 2013.

Political first: And this current shutdown, even if it's among the briefest, will be remembered from a political standpoint.

It's the first ever federal government closure when one party, this time Republicans, controlled the House, Senate and White House.

Shouting and shouting out: While the Senate speeches leading to and following last night's failed final effort to keep the government open were impassioned, there wasn't much shouting.

But as we wait for Capitol Hill lawmakers come up with a way to get government offices — including the Internal Revenue Service before it's scheduled to start processing tax returns and issuing refunds on Jan. 29 — here is some Saturday Shout Out reading.

Here's hoping members of Congress and the White House can quickly come to an agreement and get Uncle Sam fully operational soon.